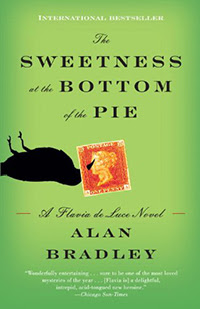 Marianne Arkins said…
LOL... it's true. I'm one of the few who doesn't like "Outlander". I have a friend who doesn't either. We had a funny conversation about it, where she said something about the book and I said I could read past the first few chapters and SHE said, "Oh, thank goodness, it's not just me!" So there are at least two of us. :-) ... totally the minority though.

I love cozy mysteries, though, so may give the other book/series a try!

Note to self: proofread before hitting send.

Wendi Zwaduk and Megan Slayer said…
I tried outlander and didn't get that far, either. It's got to be one of those if you like it, you really like it, but if you don't then you really don't books. Shrugs. I'm game to try the other one though. :-)
6:42 AM

Lydia said…
The Sweetness at the Bottom of the Pie does sound interesting.

P M Prescott said…
Watched the first two seasons of the Outlander series had enough, not that interested in trying to change history through time travel. http://pmprescott.blogspot.com/
8:50 AM

Michael Mock said…
I'm pretty sure my sister in law recommended the Flavia De Luce books to me a while back, too; I really should go check those out. I've never tried the Outlander books, mostly because they don't seem quite like my cup of tea, but the folks who enjoy them seem to really enjoy them.

Black city girl said…
I have watched all Four seasons of the OUTLANDER series and cannot wait for the 5th season to air. Totally love them

Tena Stetler said…
Interesting list. I tried Outlander and it just wasn't for me. I'll check out the Flavia de Luce series. Thanks for sharing. Here's mine. https://www.tenastetler.com/lsrs-wednesdays-blog-challenge-11-6-19-books-ive-recommended-why/
11:26 AM

Maire @ Stringchronicity said…
I vaguely remember reading Outlander when it first came out...but I've tried to revisit it a few times and couldn't get into it. So I understand why you like it and why Marianne just can't sink into the book ;)
2:51 PM

Tanith Davenport said…
I couldn't get into Outlander, but I'll give Flavia a try.
4:46 AM