Win a $25 GC: Jay Got Married by James Robinson Jr.

This post is part of a virtual book tour organized by Goddess Fish Promotions. James Robinson Jr. will be awarding a $25 Amazon or Barnes and Noble GC to a randomly drawn winner. Click on the tour banner to see the other stops on the tour.


My Writing Space
The office where I work is hardly a dream. I would call it more of a catch-all. We have a master bedroom and 2 smaller bedrooms, and I claimed one of the bedrooms for my office. Our three girls are all 40 years old or close to it and have married and moved out. My office measures about 10X10. The problem is I have about 12X15 feet worth of stuff—too much furniture, too much clothing, too many books, and too many watches. (I’m a watch freak.) My real writing space is one of those huge oak, bankers/style computer desks. A large digital keyboard completes my décor. Let’s just call my dream space…cluttered.

Worse, when company comes, my wife tosses any loose items that are littering up the other parts home into Jay’s office. She calls it putting it there, “just for now.” Just for now means I’m stuck with them. They’ve become part of my landscape it until I can find a better place to dispose of them. Then there’s that picture of the Three Stooges on the wall. That just about sums up my character.

If I look out my side window, the window to my right--the view is actually quite nice. A large well-kept field sits unused except for when children trek through coming from a nearby school on their way home. Then there’s the murder of crows who sweep through area looking for a bite to eat. They’re huge creatures, these crows. I save bread and toss it to them when possible. They squawk with approval. Or maybe they’re just crass and loud. It’s hard to tell. I’m not in a quiet suburb. I live on a plot of expensive city land and the nice lot will soon be inhabited by more costly houses like mine. My view will be shot all to hell. But for now, I’ll take what I got and be happy. 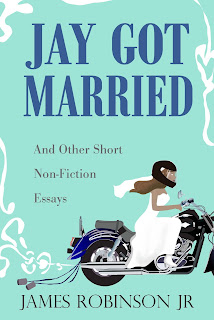 Jay Got Married consists of 9 humorous and, at times, poignant essays chronicling the ironies of everyday life in word and picture. Take for example the lead essay, aptly titled, "Jay got Married," where I find myself mired in a horrendous dream.

In the fantasy, my aging father--dressed in his favorite Champion t-shirt with stains covering the front--marries my wife and I like he did 42 years ago but, this time around, the my 92-year-old ex-clergy dad forgets his lines causing me to coach him through the event with hints like: "ask for the rings, ask for the rings." All the while, my best man sings Sonny and Cher's, "I Got You Babe."

Finally married, my wife and I end the ceremony with a kiss. But as I turn to exit, my eyes catch a glimpse of the bridesmaid who is no longer my wife's best friend but now Gal Gadot from Dell Comics and Wonder Woman Fame. She is dressed in full Wonder Women regalia and looks totally shocked by the whole affair.

My mother turns to my father (now in the audience) with a quizzical look and says, “Dad, look at that bridesmaid. Isn’t that Superman?” She doesn't get out much.

As we exit the church, and the bubbles fill the air--no one uses rice anymore—my wife ignores the limo and takes off on a sleek motorcycle, leaving me in the lurch—hence the cover.

Sure, it's sounds crazy. But, in truth, isn't the world of marriage crazy these days? In my case, what would one do when faced with the prospect of losing their beloved wife after 42 years? At age 67, would they remarry? Would they even want to remarry? These and other marital tidbits are discussed with humor and as much reverence as I could muster.

P.S. The author pairs up with Wonder Woman again in a final bit of photo wizardry Why? How? How are tricky copyright infringement laws avoided? Read Jay Got Married and find out.

You’re like, “What’s the big deal? Sure, it’s a sad thing, but don’t be too hasty. People fill that void in their lives all the time. It can happen. Sure, you’ve lost someone near and dear to you. But you could get over it. Even at your age. Time heals all wounds.” (Boy, you could’ve done better than that.) “People are living longer now. You’ll have more time to think this through. I see couples remarrying in their 70s and 80s.”

And I say, “While that may be true, I have to ask myself how I could find someone after a tragic death, when married people can’t seem to decide who they want while they’re both still among the living. I see people divorce and remarry two, three, four, and even five times. Amongst the marital shrapnel, some have their next spouses all picked out before the split.

Switch partners in the middle of a dance four or five times? Really? After a few shots at it, I would have to practice a little self-examination. I think I’d ask myself, “Am I missing something? Shouldn’t I be wondering if a pattern is developing?” Before I jump a fifth set of bristles, I’d be thinking, Why do I keep marrying people and divorcing them? Could it be... could it be... could it be… me?

Well, the difference is, you can count these cast-offs in the still among the living category. You can always figure on those exes to be around to torture for alimony, child support, and just general purposes. But once they’re gone, you’d have to feel some kind of grief. Even if you only see their name in the obituary and suck your teeth.

About the Author:James Robinson, Jr. is an award-wining author who has written 6 books in both the fiction and non-fiction genres. His first book Fighting the Effects of Gravity: A Bittersweet Journey Into Middle Life, was an Indie Award winner for nonfiction. His first foray into fiction, Book of Samuel, was a Readers’ Favorite Award Winner. His latest book—Jay Got Married—is a collection of 9 humorous, sometimes poignant essays.

Mr. Robinson resides in Pittsburgh, PA with his wife of 43 years. He is the father of three daughters ages 37, 38, and 40 and has six grandchildren.

Goddess Fish Promotions said…
Thanks for hosting!
4:45 AM

James Robert said…
Good Morning! Thank you for the book description.These tours are great and we have found some terrific books so thanks so  much.
6:42 AM

Bernie Wallace said…
I hope your book is a success.
8:19 PM

Karen H said…
I liked reading your guest post about your office.
12:16 AM