Win a $30 GC: Exile in Darkness by Annalisa Carr

This post is part of a virtual book tour organized by Goddess Fish Promotions. Annalisa Carr will be awarding a $30 Amazon or B/N GC to a randomly drawn winner via rafflecopter during the tour. Click on the tour banner to see the other stops on the tour. 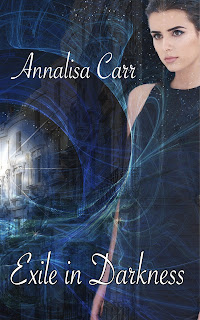 Heritage and magic matter to the London covens. Aristocratic witch, Isabella Pethany, has heritage but not magic.
Underworld powerbroker, amnesiac vampire Maldit, has magic but no heritage.
Lukas Sindis, coven sorcerer and famous psychopath, has both.

Isabella’s null magic status makes her an embarrassment to her family, but since her sister was murdered, she is all they have left. Guilt makes her willing to do almost anything to compensate for her lack of value, but her grandmother’s proposal to match her with Lukas, in a bid to bring strong magic back to their bloodline, is a step too far.

When Maldit rescues a strange witch from hunting vampires, his main concern is to limit trouble in his territory. Witches are notoriously troublesome, and this one is no exception. Her proximity slashes through his damaged memory, allowing him to catch glimpses of his forgotten past.

Drugs have suppressed Lukas’s magic for almost twenty years, filling him with a reservoir of trapped power. When he escapes, his magic bursts free, falling like a tidal wave on Maldit and Isabella, sweeping away the spells paralysing both of them.

The dark secrets of the London coven are about to explode into the light of day.

Maldit woke from his day sleep with a feeling of displacement. He sat on the edge of his luxurious hand-carved bed and contemplated his bare feet.

He remembered snatches from his dreams, something that had never happened to him before. Vampires didn’t dream.

He wasn’t a typical vampire; he’d known since shortly after his birth, when he heard the sound of his own heartbeat, that he was different. Vampires had no heartbeat.

My heart beats. I have a heart.

He rested one protective hand on his chest.

He couldn’t remember his making. Vampires lived with their makers, in the original nest, until they were ready to move on and create their own territory. His memory stretched back only so far. After that, the past was a high impenetrable wall.

I have no maker.

He lived alone, except for Sandro, and vampires were social animals. If he was a normal vampire he would have his own nest by now.

I have no nest.

Loneliness bothered him for a single beat of his aberrant heart.

He was nearly three hundred years old (as far as he knew), and powerful enough to maintain a number of blood slaves, fledglings and young vampires. He had been born with power. If he was a typical vampire there would be a blood slave waiting in his bed when he woke; he would be able to feed without having to leave his home. But he wasn’t a typical vampire, he had never had a fledgling, he wasn’t a Maker, he couldn’t create new vampires. His blood was warm and now he had dreamed, and there were no blood slaves in his home.

He wanted to scream the words through his city and wake the entire population. 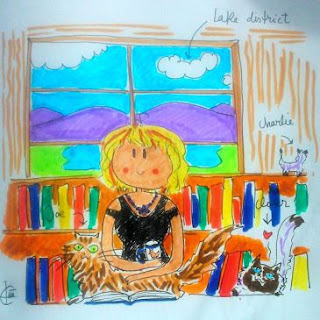 Annalisa Carr lives in the English Lake District with her two cats. She writes in multiple genres, but has a weakness for paranormal romance and urban fantasy.

As a child Annalisa wanted to be a scientist, wear a white coat and explore outer space. She worked as a scientist for a very long time, but never got to fly a spaceship or even travel beyond the solar system. This was a huge disappointment given the reasons for her career choice, so eventually she made up stories instead. Probably just as well, as she is claustrophobic.

Exile in Darkness is set in the same world as the Children of Poseidon series; a slightly skewed version of London.

Anne Cleasby said…
Thanks for hosting 'Exile in Darkness' today - it's good to be here...
5:23 AM