Win a $20 GC: Margaritas, Mayhem, and Murder by Mary Cunningham

This post is part of a virtual book tour organized by Goddess Fish Promotions. Mary will be awarding a $20 Amazon or B/N GC to a randomly drawn winner via rafflecopter during the tour. Click on the tour banner to see the other stops on the tour. 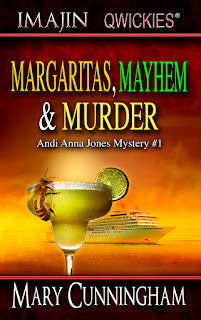 Andi’s step-mother is a real piece of work! But is Ruby a murderer?

Andi Anna Jones, so-so travel agent/amateur sleuth, puts aside her resentment of her father’s widow and books a 60th birthday cruise to Cancun for Ruby and three friends. Never does Andi imagine the cruise will lead to the murder of a has-been lounge singer—or that Ruby will be the main suspect.

Flirting with more than danger after arriving in Mexico, Andi connects with the charming local sheriff, Manual Rodriquez. After an embarrassing night involving the sheriff, too many margaritas, and a Mariachi band, a chance to check out an eyewitness to the murder leads her to Las Vegas.

In Vegas, a mysterious meeting in the Bodies Exhibition, a body preserving in the prep-room, and an evasive owner of a dance studio, give Andi clues to help Ruby. But when Andi is mercilessly drugged and locked in a storage room, she realizes dear old step-mom isn’t the only one in jeopardy.

“Tell me what’s going on. Slowly, and about fifty decibels lower. Why are you in jail?”

“Well, honey, I’m not sure. Oh, I know what they’re saying, but I didn’t do anything. I swear. Well, at least nothin’ I can remember. You see, it all started on the cruise ship dance floor, quite innocently, mind you.”

“What started?” I located my slippers and shuffled to the bathroom.

“As I was saying before you interrupted, it all started on the dance floor. You know, they play such romantic music on these cruises like, Shadow of Your Smile and Mandy. Oh, don’t you just love Manilow? Well, anyway, Lenny and I were having a lovely time, and he was obviously enamored, if you catch my drift.”

I knew this was a mistake. Still, I asked, “Lenny who?”

I drew a blank.

“Lenny La Mour,” Ruby huffed, “The famous Las Vegas performer? He’s the reason I picked this cruise. He had his own humongous nightclub and everything. Oh, Andi Anna, don’t tell me you’ve never heard of him. Why, women my age swoon at the sound of his voice. But, I suppose your generation only has eyes for that Bon Ami person.”

“Uh, are you, by any chance, talking about Bon Jovi?” 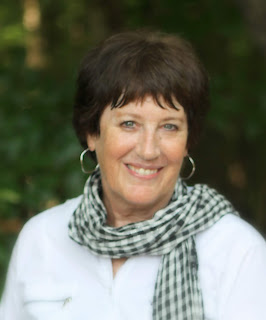 Author, Mary Cunningham, grew on the northern side of the Ohio River in Corydon, Indiana. Her first memories are of her dad’s original bedtime stories that no doubt inspired her imagination and love of a well-spun “yarn”.

Childhood experiences, and a recurring dream about a mysterious attic, inspired characters, Cynthia and Augusta Lee, for her award-winning middle-grade series, Cynthia's Attic. The setting is in her childhood home in Southern Indiana. Family stories and ancestors comprise the storylines. There are currently five books in the series: The Missing Locket, The Magic Medallion, Curse of the Bayou, The Magician’s Castle, and Legend of Lupin Woods.

Through a horrifying stint as a travel agent, the character, Andi Anna Jones, travel agent/amateur sleuth, inspired her latest adult mystery series. Book # 1, Margaritas, Mayhem & Murder was released Nov. 30, 2017. The author is currently writing Book # 2 of the series, along with another middle-grade series, The Adventures of Max and Maddie, a historical time-travel, and the biography of a former Army brat/University of Connecticut women’s basketball player who started a non-profit foundation to create scholarships for children of deployed veterans.

Cunningham is a member of The Georgia Reading Association, and the Carrollton Writers Guild.

When she gives her fingers a break from the keyboard, she enjoys golf, swimming and exploring the mountains of West Georgia where she makes her home with her husband and adopted, four-legged, furry daughter, Lucy.

“If Evanovich's Stephanie Plum were a travel agent, she'd fit right in working this case alongside Andi, a wanna-be detective readers are sure to love.” —Regan Black, USA Today bestselling author of the Escape Club Heroes and Knight Traveler novels.

“Grab a margarita and hold on tight; you're in for a wild ride.” —Karen MacInerney, Agatha Award nominee and author of the Dewberry Farms Mysteries

Buy the book at Amazon, Barnes and Noble, Smashwords, Google Play, or Kobo.

Mary Cunningham said…
Thanks for being part of the Margaritas, Mayhem &Murder Book Blast!
7:07 AM