This post is part of a virtual book tour organized by Goddess Fish Promotions. Andi will be awarding a $20 Amazon or B/N GC to a randomly drawn winner via rafflecopter during the tour. Click on the tour banner to see the other stops on the tour. 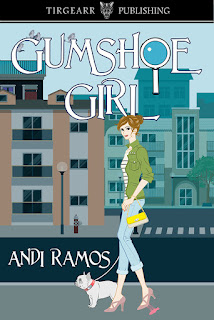 Sheagan O’Hare got more than she bargained for when her newly inherited detective agency lands its first case; a missing person, embezzlement, and murder. Sheagan’s out to prove she can hang with the pro's, despite the constant reminder of her amateur status from an annoyingly attractive FBI agent, Colin 'Mac' MacEvine, who’s forced himself into her life.

How does she feel when an old high school friend hopes to ignite a new romance?

Will she be able to discover if detective work and love can mingle before someone gets hurt?

As she shifted her weight, the metal walls started to reverberate and Sheagan stifled a gasp, willing the rumbling to cease. Her breathing became labored as the musty air stole the aroma of the sweet perfume wafting up waft from the suite below. She stilled her movements and did the only thing she could think of… nothing. Nothing but stare at the heap of blankets and wait.

Come on, bimbo, come up for air. I know he doesn’t last that long.

Her discomfort increased as the noise from their passion became more intense.

She mashed her cheek and upper body against the grate.

I just need a peek to confirm.

She pressed harder, ogling the bed. Finally, she caught a tiny glimpse.

She pushed and heard a chirring sound, then a scraping. She froze in place, but the grate gave way with a creaking groan and crashed to the ground. Time stood still as Sheagan realized there was nothing between her and the floor except air. 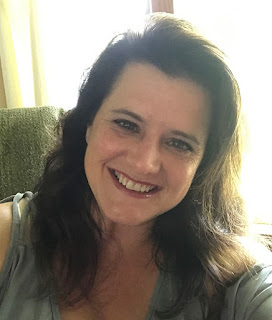 Andi Ramos grew up in central Massachusetts where she still lives today with her family, goat, and Boston Terriers. Her love for reading grew into a passion for writing. She dabbled with pen and paper for a long time and eventually stopped pushing her amusements aside and started developing those stories into novels. One of her favorite things to do is to hop into her motorhome with her family and write while traveling down the road as they journey to various destinations.

This is the author's debut book.

Unknown said…
Thank you for hosting, I would love to answer any questions!
6:32 AM