Enter to win a $10 GC: Undercurrents in Time by Pamela Schloesser Canepa

This post is part of a virtual book tour organized by Goddess Fish Promotions. Pamela will be awarding a $10 Amazon or B/N GC to a randomly drawn winner via rafflecopter during the tour. Click on the tour banner to see the other stops on the tour.

What if time travel proved you were meant to be together? Sometimes the very things that bond two people can drive a wedge between them. Tabitha and Milt have been through a lot together, but they find themselves pulled in very different ways.

Tabitha longs for a getaway, while Milt is busy with his responsibilities. She embarks on an unplanned journey. With this attempt to pull herself out of the rut, how will she handle the unknown dangers she faces and return her life to normal?

Dreaming was fun. But this was no dream. Tabitha certainly could not sleep. The wheels were spinning, and an elaborate dream turned into a plan. She held the wrench tightly, praying Milt would not awake, though a prayer was not necessary. He was in a deep sleep that was the envy of many a new parent. It seemed so unfair to her.

She got up, tiptoed to the wall and switched on the ceiling fan, adjusting it to high power. White noise. Peter wasn’t making a sound. She moved stealthily to the laundry basket full of fresh, clean clothes that no one had folded or put away. Three pairs of underwear, two spare t-shirts, two pairs of socks. A pair of blue jeans. Gauze for binding, if needed, if there possibly was anything left of her nursing capabilities. Her jacket was in the hall closet. It might be necessary. Or not.

She quietly closed the bedroom door. Stopping at Peter’s doorway, she saw the motionless form in the crib. A hand moved, a fist opening and closing. She remembered all the movement he made while in her belly. A smile touched upon her lips. He won’t know I’m gone. Will he?

In the spare bathroom, she grabbed some cleaning wipes, deodorant, bra liners (in case of leaks), and a bar of soap. On second thought, she also grabbed some more gauze, in case of more drastic leaks. New moms could not travel light. The Allen wrench “key” waited in her pocket. She passed by the kitchen, stopping to take a bite of the leftover dinner. It was good, but she moved on, gliding out to the garage, and got the remainder of her supplies, feeling in her pocket for the Allen wrench again.

This was crazy. How could she do this to them? This is just for me, she thought. How often do I do anything like that anymore? Heck, I’m even questioning my own marriage. I just need a break. 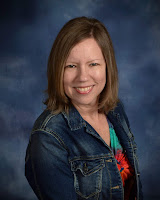 Author Pamela Schloesser Canepa had a childhood full of travel and moving, fueling her writing of poems and stories as a child to provide entertainment for long trips. When her family settled in the southeast, writing provided an outlet for private thoughts and emotions for years, until she decided to self-publish fiction in 2016. Pamela's genres include science fiction, paranormal fiction, and poetry of all types. The "Made for Me" series was Pamela's first published fiction series with a futuristic flavor. Pamela plans to continue to write a spinoff with one of the characters in “Undercurrents in Time,” and her next project is another installment in the “Made for Me” series.

Goddess Fish Promotions said…
Thanks for hosting!
5:55 AM

Unknown said…
I enjoyed getting to know your book and thanks for the chance to win :)
10:28 AM

James Robert said…
These tours are great so thank you for all the hard work you all put into bringing them to us. We have picked up some terrific books thanks to all of you bloggers and the authors have some amazing books to read.

Bernie Wallace said…
Who is your favorite literary character? Thanks for hosting. Bernie Wallace BWallace1980(at)hotmail(d0t)com
7:52 PM

Bernie Wallace said…
What is your favorite Holiday? Thanks for hosting the giveaway and congrats on your release. Bernie Wallace BWallace1980(at)hotmail(d0t)com
4:51 PM