This post is part of a virtual book tour organized by Goddess Fish Promotions. Kristie will be awarding a $25 Amazon or B/N GC to a randomly drawn winner via rafflecopter during the tour. Click on the tour banner to see the other stops on the tour.

Depending on my mood and the weather (I live in Chicago), I choose from one of three places to work: my front porch, my local coffee shop or at home in my office.

When the weather is nice, I get up early, get a cup of coffee and head out to my front porch. I love being surrounded by all of my plants and hearing the crickets and birds in the quiet morning hours. I savor the few minutes when a sliver of sun creeps through the buildings and onto my porch. I always pause and spend a few moments doing a meditation with the sun shining on my face.

When it’s raining, cold or I just need a change of pace, I head down to my local coffee shop, Heritage. I’ve yet to find another coffee shop that also sells bicycles or one with as much character and charm. They play great music, have fresh cut flowers on every table, brew terrific coffee and make a mean breakfast burrito. I always have great writing sessions at Heritage and always leave with a smile on my face.

When I work at my home office, I turn on my fireplace, light candles and turn on music from Pandora. I toggle between Indie-Singer-Songwriters Radio, French Café Radio, and Chris Stapleton Radio. I sit on either side of the fireplace in a chair or on my couch and always have fresh cut flowers on my tables. Mostly, I write in the morning but occasionally, I’ll write at night. In the dark evening hours, my coffee is traded in for a glass of full-bodied red wine.

Growing up on a farm in Brockville, Illinois, did not prepare Colleen O’Brien Adler to be the wife of a wealthy entertainment lawyer living in Chicago. It certainly didn’t prepare her to be Dinah Adler’s daughter-in-law. The stay-at-home mother of two has more than she’s ever wanted—a personal stylist, a prestigious country club membership, a multimillion-dollar home—but she finds herself not only struggling with depression and body image but also failing as a parent and fearing for her marriage. Her life is about to change when an invitation to a wellness meeting arrives in her inbox. With some coaxing from personal coach Kory Stone, she commits to a new beginning. But will she be able to overcome the things that are holding her back?

Colleen tossed the other pieces of mail on the kitchen island between her freshly opened can of Diet Coke and the white-lidded paper cup that had contained a large vanilla latte. She tore through the heavy cardstock. White roses swirled up each side of the invitation.

Harborview Country Club cordially invites you to attend the Forty-Fourth Annual Spring Fashion Show — featuring Raina Rose. The event will be held on Friday, the first of April at noon. RSVP by the eighteenth of March. Spots are limited!

Today was March 17. Colleen dialed the club and was put on hold. While she waited, she thought of her doctor’s appointment scheduled on Friday, April 1. She would have to reschedule. She wasn’t missing the fashion show for the second year in a row.

The club receptionist finally returned to the line. “I’m sorry. Mrs. Adler, but the event is full.”

“I sent them three weeks ago,” the woman said. “Would you like me to add you to the waiting list?”

“But I just got mine,” Colleen said. “Who’s in charge this year?” She already knew the answer to that question — her mother-in-law, Dinah, and her porcelain-faced lackeys, Ashley Barr and Victoria Heller.

The same thing had happened last year, and Colleen had given the three women the benefit of the doubt. She believed them when they blamed the post office for the delay. This year, however, Colleen knew her invitation was sent late on purpose. 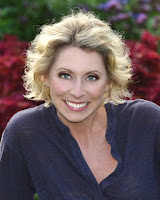 Kristie Booker is the author of Blooming Into Life, a blogger and a Wellness Coach. She enjoys coaching and inspiring women through her writing as well as in person. Kristie is a wife and mother of two sons. She grew up in rural Illinois, but now lives in Chicago.