Win a $25 GC + more: Emerge Beyond Circles by John Geers 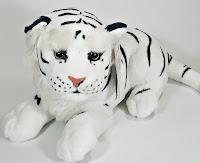 This post is part of a virtual book tour organized by Goddess Fish Promotions. John Geers will be awarding a $25 Amazon GC, a signed copy of the book, and a stuffed tiger (US only) to a randomly drawn winner via rafflecopter during the tour. Click here to enter the giveaway.

As a sixth grade teacher, do your students know about your book or have you kept it secret from them?

They know about it and a good number of student parents have bought it and read it. There is content that is not suitable for most sixth graders so I don’t actively mention it. But, they search your name in Google and come across it on their own. I tell them there is some swearing in it and they ask me why I would put swearing in it. My reply is that it is the characters swearing and it is my job to write what they are telling me. Further, I tell them that if I don’t write exactly what the characters are saying, they get mad and swear at me!

How many books will be in the Eternal Coven series?

I have planned three. One done…two to go!

Where did you get the inspiration for this story?

I was inspired by other authors. We used to have a great locally owned book chain here in the Milwaukee area. They regularly had authors of all kinds do author talks. I went to dozens of them. Hearing the story of how a book was written was as fascinating to me as the book itself. It wasn’t long before I wanted to be part of that process.

The original nugget came in a dream. The other 98% came from careful consideration of what I wanted to include in my novel. It contains themes of love and loss from my own life. Then I included the elements of story that I love most. I constructed it in a way that I would love and I feel like I succeeded.

As a debut author, what's one thing you would do differently if you could go back in time?

Nothing. It was a wonderful journey. I had setbacks and hurdles but it would have been much less fulfilling if they were removed. I am glad I did not know the extent of the devotion and patience I would need to finish this project at the onset…I don’t think I would have completed it if I had known.

Two couples from Madison, with entwined destinies, both seeking love, are connected by a single element: the ancient Siberian witch, Thuban-Pol. Her magic will either be their savior or their ruin.

Thuban-Pol is the latest in a lineage of Siberian witches. Their eternal aim is to guide humanity to true love. Their guiding tenet, “For love to bloom, these three endure: sacrifice, perseverance and suffering. But the greatest of these is suffering.”

Since the dawn of humanity, they have summoned countless couples, inflicting suffering with the intention to grow true love. They have never succeeded…but now they have their best opportunity in two couples from Wisconsin.

If they succeed, love will finally bloom for all of humanity, if the suffering inflicted on these couples doesn't kill them first.

Slivered gray wood covered the outside. Macabre scenes carved like tattoos stretched from ground to gutter and marched around each corner in a black parade.

Clint stepped close to the dark images and put a finger to one. "It's soft and squishy, like driveway tar in summer, but it doesn't stick to my skin. Weird." His finger went to his nose, and he said, "Interesting. Hey, sniff this stuff."

Lucy pushed her nose forward and sniffed the carving. "Yum, smells like…" she let the scent tumble around her brain, "like peppermint and something else I can't place, but definitely peppermint."

"Check out these carvings of animals," he said.

Real and imagined creatures prowled midst the gray slivers. Indigenous animals were well represented; the snowy owl, Arctic fox, caribou and ermine. Along with these were animals too strange to be from this age. Some warned. Others offered a wry smile of welcome. A serpent barred vicious fangs stained crimson, dripping pregnant bulbs of creamy poison. A grizzly bear smothered the head of a besieged she-wolf with one massive paw while tonguing the cheek of its pup. Wild caribou ran in stampede along the edge of a deep ravine, flirting with the abyss.

Woven among the animals were humans. Black eyes. Black bodies. Black forms. Black illuminated. A child held the face of its mother. A man raised a silver sword over the broken body of his slain foe. A son leaped into the arms of his father, reminiscent of the Prodigal Son, but on this wall, soaked in black, the anguish and joy were fresh. Sex was here too. Bodies engaged in all variety of forbidden acts, twisted and beautiful.

As the black parade marched on, frozen poses of pain pinched Lucy, forcing her tight against his chest once more.

A man groped the ground with orange coals where eyes once took in the world. A woman with a flapping tongue, split like the Serpent, hissed a song to the full blood moon. A young man pled for mercy, torn fingers lost in the gnashing teeth of his lover. A man pounded the ice above his head. A child wailed in the jaws of a terrible beast, eyes begging for a hero, a call for rescue swallowed by winter. A family huddled tight, defying flames that, in real life, would be their end. A woman slumped with blood and afterbirth at her feet, her ashen eyes stone, silence of mother and child scattered across eternity. A wrinkled face echoed hope, sealed behind tortured lips. 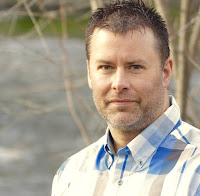 John Geers drew inspiration to begin his debut novel from a dream he experienced.

Hours spent in the caffeinated air of his favorite coffeehouse proved to be the perfect place to complete Emerge Beyond Circles.

John is a middle school literacy educator, where he inspires and is inspired by the writers of tomorrow. He is the founder and facilitator of his school’s Creative Writing Club. He is also a columnist for the online magazine Elephant Journal.

He loves a good story, being on the water, and witty puns. He can be found hiking the wilderness, biking big hills, sipping dark coffee, and looking for a chair in the mall.

Victoria Alexander said…
I'm looking forward to checking this one out - thanks for sharing the excerpt! :)
4:38 PM

slehan said…
Looks like an interesting book.
How do I enter? No rafflecopter or anything like that.
Thanks for the contest.