Win a book: A Minor Deception by Nupur Tustin

This post is part of a virtual book tour organized by Goddess Fish Promotions. Nupur will be awarding a a free print copy of the book (Open to US only) to a randomly drawn winner via rafflecopter during the tour. Click on the tour banner to see the other stops on the tour.

Kapellmeister Joseph Haydn would like nothing better than to show his principal violinist, Bartó Daboczi, the door. But with the Empress Maria Theresa’s visit scheduled in three weeks, Haydn can ill-afford to lose his surly virtuoso.

But when Bartó disappears—along with all the music composed for the imperial visit—the Kapellmeister is forced to don the role of Kapell-detective, or risk losing his job.

Before long Haydn's search uncovers pieces of a disturbing puzzle. Bartó, it appears, is more than just a petty thief—and more dangerous. And what seemed like a minor musical mishap could modulate into a major political catastrophe unless Haydn can find his missing virtuoso.

Estates Director Rahier is strangely reluctant to let the Police Commissioner intervene in the matter of his violinist's disappearance.

“You may even wish to report the theft to the Police Commissioner,” Haydn added since the Estates Director appeared not to be listening.

Rahier’s head came up with a sudden, sharp movement. “The Police Commissioner?” His eyes narrowed. “And why would the Police Commissioner be interested in a trifle such as this? Do you suppose Herr Lichtenegger has nothing better to do than concern himself with your missing principal violinist and a violin he has purloined?”

Haydn stared. Had the Estates Director taken leave of his senses? “How, then, do you propose to bring Bartó back and recover the violin?” he demanded. “Surely, this is a matter for the Police Commissioner and his men.”

Rahier stood over him, his icy blue eyes gazing into Haydn’s from what seemed like an immense height. “Herr Lichtenegger is concerned with security, Herr Kapellmeister.” The Estates Director’s arm swept the air in a semi-circular motion. “The security of the Empire. What threat to the Empire does your pernicious principal violinist and his violin pose? I would look like a fool were I to bring this business to his notice.”

Haydn was silent, struck by the strength of the Estates Director’s opposition to calling in the Police Commissioner. He shifted uneasily in his chair. God forbid that it should be so, but was there a more malevolent reason for Rahier’s opposition? 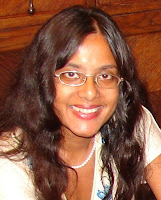 Author Bio: A former journalist, Nupur Tustin relies upon a Ph.D. in Communication and an M.A. in English to orchestrate fictional mayhem. The Haydn mysteries are a result of her life-long passion for classical music and its history. Childhood piano lessons and a 1903 Weber Upright share equal blame for her original compositions.

Her writing includes work for Reuters and CNBC, short stories and freelance articles, and research published in peer-reviewed academic journals. She lives in Southern California with her husband, three rambunctious children, and a pit bull.


For details on the Haydn series and monthly blog posts on the great composer, visit the official Haydn Mystery web site.

Buy the book at Amazon, Barnes and Noble, Kobo, or iBooks.

Goddess Fish Promotions said…
Thanks for hosting!
4:01 AM

Unknown said…
congrats on the tour and thanks for the chance to win :)
7:47 AM

NT said…
Thanks for hosting this excerpt!
1:25 PM