Any weird things you do when you’re alone?

What is your favorite quote and why?

“Reality is for those who lack imagination.”

I first made this my motto back when I played video games pretty seriously, MMORPGs to be precise, and lived for weeks in virtual realities with other people. It was a humorous way to banish the concerns of those who questioned the value of a virtual reality and the friendships possible in such realms.

Then it became for me a rallying cry for questioning existing reality as the be-all and end-all of life. Why did things have to be the way they are? Couldn’t they be some other way? And I am not speaking of fictional or virtual or imaginary realms, but of changing society and its institutions and rules.

I’m reminded of Ursula Le Guin’s acceptance speech for her award at the National Book Awards in 2014. Look it up and read the whole thing, but for now this snippet:

“Hard times are coming, when we’ll be wanting the voices of writers who can see alternatives to how we live now, can see through our fear-stricken society and its obsessive technologies to other ways of being, and even imagine real grounds for hope. We’ll need writers who can remember freedom – poets, visionaries – realists of a larger reality….

…Right now, we need writers who know the difference between production of a market commodity and the practice of an art. Developing written material to suit sales strategies in order to maximise corporate profit and advertising revenue is not the same thing as responsible book publishing or authorship.

Books aren’t just commodities; the profit motive is often in conflict with the aims of art. We live in capitalism, its power seems inescapable – but then, so did the divine right of kings. Any human power can be resisted and changed by human beings. Resistance and change often begin in art. Very often in our art, the art of words.”

To me she is saying that we are condemned to live in our current and unsatisfactory reality unless we summon the power of imagination and create better visions of what is possible. And she calls specifically upon writers to take up this task. So I aspire to exercise imagination whenever possible.

In “Toru: Wayfarer Returns,” I imagined a different Japan. Not the Japan of history and not a Westernized Japan, except superficially in its weaponry and uniforms, but a fairer and more just Japan, a Japan that worked for the blacksmiths and fisherman and not just for the lords. I hope I was subtle about it and not didactic, but those ideas are in there, tucked behind the galloping escapes and dirigibles and adventure bits, and they are important to me as an author.

Who is your favorite author and why?

Too hard a question to answer, for I love so many, but make a list of the epic fantasy writers from J.R.R.Tolkien to G.R.R.Martin and add to it Arundhati Roy and her single novel “The God of Small Things” and you are in the neighborhood of what I love. Big epic world-building, explorations of morality and justice, unforgettable characters who force us to confront the human condition.

At the moment, to improve my own writing, I’m reverse-engineering G.R.R.Martin and his marvelous ability to create complex characters—bad people we love to hate, who surprise us with goodness after we’ve given up on them, or good people who grow harder and crueler and surprise us with their capacity for ruthlessness. He’s just amazing at this.

What, in your opinion, are the most important elements of good writing? I’m a genre writer, so if you put a gun to my head and ask me to choose between story and sparkling sentences, I will choose story every time. Once you have a compelling story—and I don’t believe you can separate plot from character in the best stories, for good plots come out of character and strong characters should drive plot—then layer on all the beautiful wordsmithing you can manage. But story comes first for me.

Where did you get the idea for this book?

I wanted to do a steampunk series set in Japan, to freshen things up from the more conventional Wild West and Victorian England settings. I failed. Oops! I wound up writing something that is more alternate history/historical fantasy than the usual steampunk adventure story. Whatever.

I went looking for a hero to lead a steampunk revolution in Japan, and found the true story of Manjiro, a ship’s cook who was rescued by American traders and taken to America. He came back to Japan, even though that was a crime punishable by death during the isolation period, and helped the Japanese government understand the Americans when Perry and his Black Ships showed up in 1853. I made Manjiro smarter, better educated and more intentional about his mission and he became Toru, the Prometheus who brings Western technology to Japan to help Japan fight that very technology.

I originally wanted more fantasy in the story, like the shapeshifter folk tales so well-known in Japan, and there remain slight traces of that, but I wound up scrubbing most references to supernatural beings out in an attempt to tighten up the genre focus a bit. Between alternate history, historical fantasy and touches of steampunk, the genre definition was getting out of hand. Shapeshifters would have only further muddled things, although I kept chanting to myself for quite some time, “Cherie Priest has whole zombie armies! I can have my shapeshifters!!” I eventually packed them off and made them leave the book. I will give the shapeshifters their own book, outside the Sakura Steam series.

A nation encircled by enemies

A noblewoman with everything to lose

A fisherman with everything to prove and a nation to save.

In Japan of 1852, the peace imposed by the Tokugawa Shoguns has lasted 250 years. Peace has turned to stagnation, however, as commoners grow impoverished and their lords restless. Swords rust. Martial values decay. Foreign barbarians circle the island nation’s closed borders like vultures.

Tōru, a shipwrecked young fisherman rescued by traders and taken to America, defies the Shogun’s ban on returning to Japan, determined to save his homeland from foreign invasion. Can he rouse his countrymen in time? Or will the cruel Shogun carry out his vow to execute all who set foot in Japan after traveling abroad? Armed only with his will, a few books, dirigible plans and dangerous ideas, Tōru must transform the Emperor’s realm before the Black Ships come.

“Omae wa dare da? Who are you? Whose ship is that? Why are you here?”

They forced Tōru to his knees.

He bowed down to the sand and spoke in the rough unhewn Japanese of a fisherman.

“Noble sirs, I am Tōru, of the village Iwamatsu, some days’ travel north of here. I was fishing with my father. A terrible storm destroyed our boat and cast us all into the sea. My father gave me a piece of wreckage to cling to as everything sank.”

Tōru struggled a moment, the words and flow of his native language catching on his lips after more than two years without a soul to speak with in Japanese. The memory of the storm and his last memory of his father that night rose up before him.

He steadied himself as the men listened intently, their swords never wavering from his throat, nor their gaze from his face.

He chose his next words carefully.

“That night was the last I saw my father. I was picked up by an American ship and taken to America.”

He bowed down to the sand again, easing between the blades.

“This night I am returning, to look after my mother. She has no other child to care for her, and no husband to feed her. The Americans brought me home, so I might do my duty by my mother and my people. I beg you, forgive me any crimes I may have committed by landing on your lord’s shore, and allow me please to return to my home.”

As he looked up into their eyes, he saw they would permit no such thing. 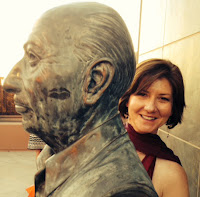 Stephanie is a writer based in the Victorian mining town of Leadville, Colorado, where she lives at 10,251 feet with her husband, five chickens, two bantam English game hens and one Cavalier King Charles Spaniel. After a former life in big cities-New York City, Tokyo, Hong Kong, Boston, Mexico City, Atlanta, Los Angeles and Santa Fe-she now enjoys the birdsong and quiet writing time she finds in Leadville. Her first novel draws on her experience living and working in Japan; her next historical novel is set in Mexico where she also lived for several years. As a Leadville local, she likes her Victorian attire spiced with a little neo-Victorian futurism and the biggest bustle possible.