This post is part of a virtual book tour organized by Goddess Fish Promotions. Elka Ray will be awarding a $10 Amazon or Barnes and Noble GC to a randomly drawn winner via rafflecopter during the tour. Click on the tour banner to see the other stops on the tour. 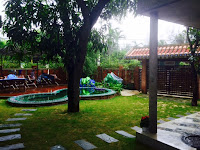 About three years back, after two decades living in big cities, my husband and I decided to move near Hoi An, a small city in Central Vietnam. In the 17th century Hoi An was a busy port, attracting traders from all over Asia and Europe. Thanks to its eclectic antique shophouses and temples it's been declared a UNESCO World Heritage Site. The town lies on a river, about a ten-minute drive from the coast. 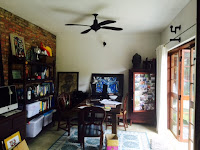 We bought some land by the beach and started to build a house, which was meant to be ready by the summer of 2015. A year and a half later, we finally moved in last week - on Boxing Day 2016. After two years of living out of boxes in crummy rental houses, it's amazing to have our own space. I spent the last couple years writing on coffee tables and kitchen counters - often with my kids playing nearby. My new office is set slightly apart from our house. It's quiet and has a door that can lock. I can't wait to get back into a rhythm of writing. 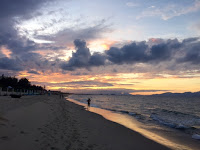 I generally spend six to eight hours per day at my desk - editing, writing or illustrating. But I develop stories and characters while walking or swimming. The ocean lies about 100 meters from my desk, close enough to jump into when a story stalls. I had two books published in 2016 - a short story collection titled "What You Don't Know: Tales of Obsession, Mystery & Murder in Southeast Asia" and a thriller, "Saigon Dark". I hope 2017 will be equally productive and wish all of you a happy, healthy and fun New Year of the Rooster!

An American lawyer dreams of killing his trophy wife in Thailand. A Vietnamese soldier goes mad in a haunted forest. A bereaved mother's trip to Cambodia ends in tragedy - or does it?

Take a spine-tingling journey from the jungles of Sumatra through Bangkok's seedy bars to the seemingly sedate streets of Singapore. Your traveling companions are a slew of dark emotions - fear, grief, jealousy, greed, lust and revenge. And your destination?

With flashes of black humor and hard-to-forget characters, these ten stories shine light into the dark corners of Southeast Asia.

“Kyle?” I yell. I’m sure my son is gone, sucked down to the bottom.

Blinking against the blood, I see him lying face down on the deck. He’s got himself wedged against the boat’s sides like a rock climber. I call again and he twists his head. I must look pretty bad, because he gasps. “D—dad?”

The boat is still rocking, but not enough to tip. Water sloshes back and forth. Kyle pushes himself onto his hands and knees. We both look around. Beneath the streaks of rain, the sea is dead calm. No swell. No big whitecaps. Nothing.

“Shit. What happened?” says my son. His face appears bleached. “What was that?”

I’ve been boating in these waters for going on two decades but can’t explain what hit us. If it was the wake from a big cargo ship there’d have been more waves. That wave came from nowhere. Was it a whale? I shake my head. “I…I don’t know,” I say.

The engine has stalled. My hands are shaking so hard I have trouble restarting it. It roars to life once, twice, only to cut out.

If he hears, he doesn't respond but just hugs his knees. "My god. My god. She's here. She's here." He says it over and over again.

"Shut up!" I yell, and my son stops. He presses his palms to his cheeks. I force myself to count to ten before trying the motor again, terrified that Kyle's right: If the motor is flooded, we're stuck out here.

At the age of eleven, Elka Ray co-founded the Double Trouble Detective Agency. She’s been on the lookout for mysteries ever since. Elka’s latest book, “What You Don’t Know: Tales of Obsession, Mystery & Murder in Southeast Asia”, takes readers on a darkly suspenseful tour of the Far East. Her first novel, a fast-paced romantic adventure titled “Hanoi Jane”, was published by Marshall Cavendish in English and DT Books in Vietnamese. Elka’s next novel, the thriller “Saigon Dark”, will come out with Crimewave Press in November 2016. Elka is also the author and illustrator of a popular series of bilingual kids’ picture books about Vietnam.

Elka divides her time between Hoi An in Central Vietnam and Canada’s scenic Vancouver Island. When she’s not writing, drawing or reading she’s in - or near -the ocean.

Unknown said…
Congrats on the tour and thanks for the chance to win :)
7:46 AM

Bridgett Wilbur said…
I love your cover and would love to read your book.
9:58 AM

Rita Wray said…
I have enjoyed the tour. The book sounds great.
12:55 PM

Bernie Wallace said…
What books are you looking forward to reading in 2017? Thanks for the giveaway. I hope that I win. Bernie W BWallace1980(at)hotmail(d0t)com
7:00 PM

Victoria Alexander said…
I've enjoyed following the tour for What You Don't Know and reading all of the excerpts. I'm looking forward to reading it. Thanks for sharing all of the posts along the way. :)
9:42 PM