Win a book: Heaing Up by Stacy Finz

This post is part of a virtual book tour organized by Goddess Fish Promotions. Stacy will be awarding a digital copy of Heating Up to a randomly drawn winner via rafflecopter during the tour. Click on the tour banner to see the other stops on the tour.

Nugget, California, is remote, picturesque—and the perfect place to fall in love. Even when you’re trying desperately not to… Dana Calloway is tired of being second choice. No question she was her parents’ consolation prize, and now she’s placed second in the race for a guy’s heart—a guy she could have sworn was The One. Is it any wonder such a normally type A person accidentally burns down her house in one distracted moment?

Cal Fire arson investigator Aidan McBride came to Nugget to do a little soul searching about his commitment phobia. But there’s only one available apartment in this tiny town, and the headstrong woman who just had a house fire needs it too. Of course, there are worse things than sharing living quarters with someone so beautiful…

Dana’s determined to resist her sexy new roommate, but it isn’t long before Aidan realizes he doesn’t have a commitment problem when she’s around. And the hotter things get in their apartment, the brighter the blaze when someone finally ignites that first spark…

Aidan hadn’t even officially started at Cal Fire when he’d gotten called out on the boomer. That’s what they called a good working structure fire. He’d just completed his six-week training at the California Department of Forestry and Fire Protection’s academy in Ione, a Gold Country town only slightly larger than his new home, Nugget. Although a seasoned firefighter and arson investigator back in Chicago, he didn’t have experience fighting forest and wildland fires.

That was all about to change.

With California in its fourth year of record drought, wildfires burned at breakneck speed across the state. And Cal Fire was responsible for protecting thirty-six of California’s fifty-eight counties, meaning millions and millions of acres. 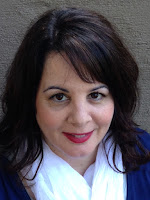 Stacy Finz is an award-winning reporter for the San Francisco Chronicle. After more than twenty years covering notorious serial killers, naked-tractor-driving farmers, fanatical foodies, aging rock stars and weird Western towns, she figured she finally had enough material to launch a career writing fiction. In 2012 she won the Daphne du Maurier Award for unpublished single-title mystery/suspense. She lives in Berkeley, California with her husband.

Goddess Fish Promotions said…
Thanks for hosting!
5:31 AM