This post is part of a virtual book tour organized by Goddess Fish Promotions. Lauren will be awarding $30 Amazon or B/N GC to a randomly drawn winner via rafflecopter during the tour. Click on the tour banner to see the other stops on the tour.

These are the facts: My name is Callie Sinclair. I am seventeen years old. I live in San Francisco. I love my boyfriend, Charlie. I work for a secret governmental agency. I am a psychic spy. This romantic, action-packed twist on the classic spy novel is perfect for fans of Ally Carter’s Embassy Row series or for any reader who enjoys cinematic writing and stories of romance and intrigue.

At seventeen, Callie is the government’s youngest psychic spy, trained to track dangerous people and weapons in her visions. When another young—and handsome and witty—psychic joins the agency, Callie’s personal and professional lives get messy all at once. If she can’t find a way to change the events she’s seen in her visions, she could lose the people she loves most . . . and her mind. Literally.

Richly painted against the backdrop of San Francisco and Berkeley, Lauren Sabel’s enthralling novel captures the thrill of exploring a unique power in a dangerous world.

I linger in front of the door to my building the next morning, enjoying the appearance of being a normal college freshman. Since my office looks like any other redbrick building on the Berkeley campus, sometimes I pretend I’m a student here. For a moment, I imagine that my worst fear is failing my English exam instead of being unable to stop a dirty bomb from hitting US soil.

But as soon as I pull the building’s front door open, I sink back into this reality, the one that stars me as the youngest psychic viewer ever to work at Branch 13, a private company that contracts with the CIA. When Indigo found me over a year ago, he explained to me why it was essential that no one knew about my job as a psychic viewer.

“If the criminals we are chasing think someone we love could have some information about our missions, they’ll stop at nothing to extract the information from them.”

So even though I knew it was wrong, I forged my mom’s signature on the documents that said it was okay for me to work at Branch 13. Indigo would never know that my mom didn’t know, and I would still be protecting her from harm by keeping her in the dark.

The front door closes behind me, sealing me into the small space in front of the X-ray machine. Other than the whirring sound of the conveyer belt and the ever-present sound of National Public Radio, the lobby is silent.

“Hello?” I call, knowing that Anthony won’t be able to hear me on his hourly smoke break. Anthony’s our security guard, but he’s about as protective as a three-toed sloth, and just as fast. His beer belly is as round as his balding head, and he couldn’t run if his feet were on fire; but worse than all that is his insistence on talking about himself in third person.

While I wait for Anthony to return from wherever it is he’s disappeared to, I listen to the radio. The reporter is talking about a satellite that was just shot into space.

“It will enter a ring of satellites twenty-three thousand miles above the earth’s surface,” the reporter says. “Regarding the recent solar activity, NASA says—”

“Anthony’s back from the dead,” Anthony announces, returning to the front desk. He whistles under his breath. “And no one better to bring me back to life than you.” 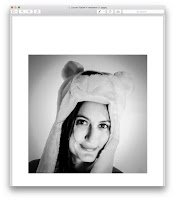 Lauren Sabel lives in the quirky dark spaces of her mind, and she tries to shed light on these spaces in her books. After publishing VIVIAN DIVINE IS DEAD in Summer 2014 with Katherine Tegen Books, an imprint of Harper Collins, she confronted her lifelong fear of being psychic by writing LIES I LIVE BY. Since in this YA thriller, teenage psychic spy Callie Sinclair works undercover for the government, forced to hide her real identity from everyone she loves, Lauren is now certain she’s on the CIA watch list.

Buy LIES I LIVE BY at Amazon, Barnes and Noble, or IndieBound
Buy VIVIAN DIVINE IS DEAD at Amazon

Peggy Hyndman said…
Many writers describe themselves as “character” or “plot” writers. Which are you?
1:01 PM

Victoria Alexander said…
I've enjoyed following the tour for Lies I Live By! The excerpts were lots of fun to read and I'm looking forward to reading it, thanks for sharing!
5:24 PM

Ally Swanson said…
I enjoyed reading the excerpt. This book sounds like such an interesting and intriguing read. Looking forward to checking out this book.
11:39 PM