This post is part of a virtual book tour organized by Goddess Fish Promotions. Karin will be awarding a $15 Amazon or B/N GC to a randomly drawn winner via rafflecopter during the tour. Click on the tour banner to see the other stops on the tour.

In a land ravaged by civil war, the Mage King Kedehen initiates a ruthless purge of the magas. Eolyn, last daughter of the magas and sole heiress to their forbidden craft, seeks refuge in the South Woods.

When she meets the mysterious Akmael, heir to the throne of this violent realm, she embarks on a path of hope, seduction, betrayal, and war. Desire draws Eolyn toward Akmael’s dark embrace, but fate binds her to Corey of East Selen, a cunning mage whose ambition challenges the limits of love and loyalty.

Can she trust either man?

Hunted in a realm of powerful wizards and brutal deceptions, Eolyn must find her own path to freedom or she will burn on the pyre.

Eolyn knew Akmael did not agree with her decision, and for a moment she thought he would ruin their last meeting by starting another argument. Instead he drew back his sleeve and said, “I would like to give you something to remember me by.”

The symbols embroidered into the fabric of his robe reflected the forest in multiple shades of green. Underneath the folds, Eolyn saw a silver band around his arm. Removing the jewel with care, Akmael offered it to Eolyn.

Awed, Eolyn turned the bracelet over in her hands. On the etched surface she recognized multiple forms of Dragon: winged serpent, snake, lion, butterfly, river otter, fish and many others. Each figure blended into the next, creating a single creature as fantastic as imagination itself.

“It was a gift from my mother.” Akmael’s voice broke with quiet emotion. “She gave it to me before she died.”

Retrieving the armband gently from her grasp, Akmael slipped it over Eolyn’s wrist and moved it just past her elbow. The metal coiled into a perfect fit against her skin.

Akmael’s hand traveled back down Eolyn’s arm. He caught her fingers in his and studied her for a moment. “I will miss you, Eolyn.”

Then he leaned forward and kissed her. 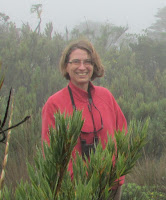 Karin Rita Gastreich writes stories of ordinary women and the extraordinary paths they choose. She lives in Kansas City, Missouri, where she is part of the biology faculty at Avila University. An ecologist by vocation, Karin has wandered forests and wildlands for over twenty years. Her past times include camping, hiking, music, and flamenco dance. In addition to The Silver Web trilogy, Karin has published short stories in World Jumping, Zahir, Adventures for the Average Woman, and 69 Flavors of Paranoia. She is a recipient of the Spring 2011 Andrews Forest Writer’s Residency.

Karin Gastreich said…
Thank you for hosting me!
10:33 AM