Win a $50 GC: I'd Rather Wear Pajamas by Chelsea Walker Flagg

This post is part of a virtual book tour organized by Goddess Fish Promotions. The author will award a $50 Amazon/BN.com gift card to one randomly chosen winner via rafflecopter during the tour. Click on the tour banner to see the other stops on the tour.
Own Your Own Strong

My newly released funny memoir, I’d Rather Wear Pajamas, is a story about finding my way into feeling comfortable in my own skin. It’s dedicated to my three daughters specifically, but it’s really intended for girls in general.

You see, we live in a time where girls and women are really putting up a solid fight to be recognized for who they are, and not what they are. We want to be viewed as smart, and strong, and powerful, right? We don’t want to be attached to those “gender-specific” words like frilly or pink or princess. I’m all for this movement, really I am. 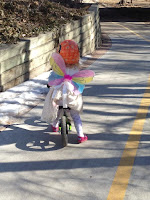 BUT, what about those girls out there who do like pink and princesses and frills? Are we teaching those girls that they’re not smart, strong, and powerful? I grew up with a career-oriented mom, and believed that the way to be strong was to follow in her footsteps. Only guess what? I had my first daughter and melted into a mush of emotion, wanting nothing to do with any career outside of being the full-time caretaker to my baby. And, not to brag, but I’m pretty damn good at being a mom. In fact, I’m smarter, stronger, AND more powerful in the role of mother than I ever was in any of my other career positions.

Again, I’m all for this movement of encouraging our girls to be strong, but I would love to see more talk defining the word “strong” as more. Strong means true. Be true to yourself, whatever that may look like. Maybe you can do 20 pull-ups without stopping. Maybe you ride a skateboard like a shooting star. Or, maybe nothing makes you more confident than twirling around on stage in a tutu. Maybe your favorite thing is writing stories about unicorns riding down rainbows. People have made a lot of money with those types of stories, you know? My point is, it doesn’t matter what you do; no matter how feminine or masculine your actions are. What matters is that you’re doing it for you. The way to find your own strong is to learn what works for you and to go for it.

Everybody has the awesome opportunity to find their own strength and path through life. Some come about their self-discoveries through studying and working hard. Others (Chelsea) spend their time nearly burning down kitchens and driving around the country with a car full of hangers.

Chelsea grew up wanting to be “strong.” She thought arguing her way through childhood and becoming a world-class attorney would get her there. But, through a series of humorous, and only slightly embarrassing events, Chelsea comes to realize that maybe her strength is meant to shine in different ways.

I think the real reason I’ve always longed to be viewed as strong is because I’ve never been able to do a single pushup in my entire life. Not a single one. As if gym class isn’t painful enough for every student ever; throw in that little nuance and you’ve got yourself a recipe for ridicule and embarrassment. I’d walk into those dreaded gym periods like I was walking the green mile to my death. The absolute worst was when that splintery rope would be hanging down from the ceiling, taunting me with the realization that it was rope climbing day. You know what I’m talking about, right? Those days couldn’t have been painful for just me. You stand in the lineup of students all waiting their turn while watching the poor sucker on the rope trying to scramble his way at least two inches off the floor. You contemplate ways to make yourself sick in order to get a free pass to the nurse’s office, but then it’s too late and it’s your turn. You pray that you don’t have a hole in your pants as you mount the rope. And then you get nervous. You get really nervous. Which means that you start spontaneously passing insane amounts of gas—while trying to climb the rope—with all your classmates down wind. I’m getting gassy just thinking about it.

Chelsea was once obsessed with cats, longed to live in a big city, didn't think she would ever have children, and aspired to be an attorney. She now lives in Boulder, Colorado as a stay-at-home mom and comedic writer with her husband and three daughters. She has no current plans to own a cat.

Chelsea said…
Thanks for hosting me and my book today! Excited to be here :)
-chelsea
9:16 AM

Sandy said…
Congratulations Chelsea on the new release. I think we would all rather be wearing Pajamas !!!
11:02 AM

Anonymous said…
I would totally read this book!
11:56 AM

Victoria Alexander said…
Truly magnificent post!! Thank you so much for sharing your words of empowerment and encouragement :D
1:05 PM

Chelsea said…
Thanks Sandy :) I dream about putting my pajamas on all day long, from the second I take them off in the morning ;)
2:38 PM

Unknown said…
Thank you for the terrific post and great giveaway!
10:59 PM

Unknown said…
I loved Own Your Own Strong! I totally agree with you. Thank you for sharing!
4:41 AM