This post is part of a virtual book tour organized by Goddess Fish Promotions. Kiersten will be awarding a $20 Amazon or B/N GC to a randomly drawn winner via rafflecopter during the tour. Click on the tour banner to see the other stops on the tour.

Having survived her terrible captivity by a sadistic doctor deep within an ancient mine, Cora returns home ready to move on with her life, but when Mason’s mysterious condition quickly deteriorates, Cora must embark on a quest for the one thing that could save his life.

When she is told Knox will accompany her, she fears she will not return alive. If Knox cannot control her, he might prefer her dead. Trusting him is a gamble she may never win…unless she can find other ways to tame the wild vampire.

She killed the ignition, slipped the satchel’s strap over her head, and shouldered the door open. Outside, the cool morning breeze played in her hair.

The airship was a great hulking beast of a thing. The body reminded her of a bowhead whale. In the back, twin vertical steering fins were probably six stories tall at least. The gondola boasted three, four, maybe even five levels—she couldn’t quite tell from this distance—and was snuggly attached to the belly of the plump, stretching bladder filled with helium gas. Four massive propellers stabbed out from the gondola’s front and rear and could be swiveled horizontally or vertically for additional lift or propulsion. They were angled toward the earth at the moment, already spinning in preparation for takeoff.

His motorcycle still revving, Knox’s muttered thickly. “I supposed you think you’re clever leaving me behind like that.”

“You owe that poor attendant back there an apology. I had to steal his only transport.” He patted the handlebars.

“Then it sounds like you owe him an apology.” She’d expected to see people lined up on the platform, or crew readying the ship. There were none. She supposed the passengers were all aboard. The loading doors were closed…the propellers spinning? Wait, was it already off the ground? “Oh, no! Are they taking off without us?!” 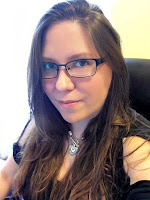 Kiersten Fay is the award-winning author of the steamy Shadow Quest series. She writes epic paranormal and sci-fi romance novels which incorporate elements of mythology and Lore. In 2012, Demon Retribution won Favorite Story of the Month via Gravetells, and received a nomination for favorite author in that same year. In 2013, her short story, Racing Hearts, was published in the anthology The Mammoth Book of Futuristic Romance. Her latest series, Creatures of Darkness, is a dark, yet steamy romance set in a future where vampires openly mingle with humans. Before becoming an author, Kiersten worked as graphic designer and now enjoys creating her own book covers.

In addition to the tour giveaway, please check for a special giveaway on the author's website.

Buy the book at Amazon, Kobo, or Smashwords.

Check out Kiersten's other books:

Goddess Fish Promotions said…
Thanks for hosting!
6:36 AM

KierstenFay said…
Thanks so much for being part of the blog tour! If you don't mind, I'd like to mention an additional giveaway going on through my website (Ending Soon!) http://www.kierstenfay.com/a-wicked-desire-cover-reveal-and-giveaway/
8:34 AM