This post is part of a virtual book tour organized by Goddess Fish Promotions. Allison Spector will be awarding a signed copy of book with original plot outline notes (loose sheets of paper) inside and additional notes at end or in margins of story (US/Canada only) to a randomly drawn winner via rafflecopter during the tour. Click on the tour banner to see the other stops on the tour.

The view inside my writing space 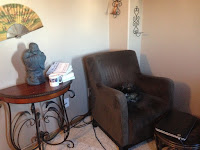 The view inside my writing space is that of a two-fold universe. On the surface there are comfy chairs and Buddha statues, and charming miscellanea. There’s an ottoman for my feet to rest upon. And there is always a cup of tea awaiting my return. There are books, eagerly sitting within arm’s reach, waiting to be read. And there are cats. So many cats!

Then deep below the surface is the body that owns the fingers that move deftly across the keys. And if you peer inside those windows you might catch a glimpse of a mind, sparking away with thoughts and energy. My brain is my writing space and it is full of sound, and soft colors. Mostly it is a place of formlessness and unspoken words. Concepts take flight in a stream of chemical impulses and the firing of neurons. There’s a flurry of emotions and ideas. My mind pushes them down, down into my fingertips where they dance across the keyboard and scatter into the world.


The view outside my writing space 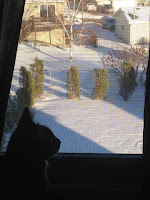 The view outside my writing space is a vast maze of McMansions that sprout up from prairie grass and frost-caked plains. They are a testament to the resiliency of the human spirit, self-actualization, and pioneering moxy, as much as they are a reflection of conquest, harm, and willful isolation from the diverse cornucopia of human experience.

Knowing what lies outside my walls, I gird myself away and pine for the mountains, counting every hour until I’m surrounded by majestic sequoias and ferns and happy little rainclouds once more.

Trouble’s brewing in the Evergreen Jungle. When controversial author Rex Jupiter plans a visit to a Bellingham bookstore, news of his arrival attracts the attention of the mysterious Paladin, who plans on leading a mob of rioting housewives against him. But the Paladin has competition. Sleuth-extraordinaire Marian Krause has her own bone to pick with Jupiter as she scrambles to solve the death of a woman who has stolen her identity. Rex may think he has the situation under control, but when the wrath of the local Druids is incurred, pitchforks and torches may be the least of his concerns.

Marian’s lungs shuddered against the fumes of the organic, locally sourced, native-friendly tobacco as it passed from the long-stemmed cigarette holder through her lips and into her body. It was a dirty, messy habit. And it was hers. The smoke floated in the air, letting forth a wave of guilty pleasure. She carefully measured out her puffs, since theauthorityoneverything.com told her that for every cigarette she smoked she would lose 5.5 minutes of her life.

Thus, she made sure that she only sacrificed 1.375 minutes at a time. She found the pleasure-to-life-lost ratio to be acceptable as everyone knew that all detectives smoked. And they did so in darkened rooms, with shades drawn, and only the light of a low-watt desk-lamp to illuminate the wisp of airborne tobacco trailing off like a faded dream.

Also, it made her feel badass. So, there.

Of course, there were disadvantages to sitting in a darkened room, the greatest of which was that it made her extremely susceptible to her husband’s Tokens of Affection, which usually fell into three categories:

(B) Fan Fiction: of a most Adult variety, written about Marian, and cleverly slipped in between her meticulously organized case files and resumes

(C) Brazen Thievery: which meant that her Second-Most Favorite Fedora would be missing, and she could only retrieve it following an Elaborate Series of Clues

The very thought of his categorical attentions made her want to climb down from her attic office and pay him a Conjugal Visit that instant. She would bring the Special Trench Coat and the magnifying glass and…

She slapped herself on the cheek. Love would have to wait. 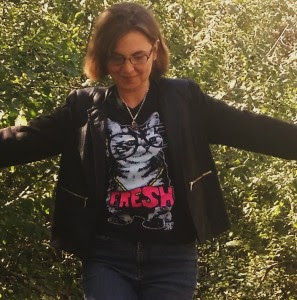 About the Author:Allison Spector was born and raised in the hedonistic playground of the Jersey Shore, but finds herself oddly allergic to spray tan. She is a proud graduate of Goucher College, and started her environmentally-focused career in Washington DC in 2005. She moved to the Pacific Northwest in 2008, and fell in love with its beauty and people. Allison is currently on a Midwestern Adventure and is determined to live as much life as possible—to accomplish her dreams one at a time—and to nurture her loving family, and blaze a trail of wit, whimsy, and eccentricity wherever she goes.