With the rift closed for the season and no more monsters to fight, Daelin Long gets bored as librarian in the podunk town of Settler, Oregon. A job interview and her brother's arrival present a tempting opportunity to escape, until her brother and her best friend, a ghost, disappear.

While Daelin searches for them, more mysteries pile up: dead people coming back to life, portraits of the town founders replaced with strange white trees, and people on the other side of the rift returning. It’s impossible. The portal that allows monsters from other universes to come to Earth is sealed until next summer.

The Rifters, a secret group protecting our world, believe the troubles are nothing more than the tantrums of an offended ghost. Daelin disagrees. If she’s right, the evil hell-bent on destroying Earth has new technology making the rift more deadly.

Before the monster summons the next apocalypse, Daelin must find it and destroy it.

Book 3 in the Rifter series.

“Ida!” Earl Blacke’s heart pounded. Was it really her? He wanted so badly to scoop her up in his arms and tell her how sorry he was for leaving her and her mother, for never returning home, for becoming a father of which she had to be ashamed.

She darted around a sharp curve in the trail.

Ignoring his protesting lungs and cramping legs, Earl bolted after her. He grabbed onto the rock to swing around the turn, bloodying his hand. His sprint amounted to nothing. The slope to the bottom was bare, only covered in moonlight. Nothing moved. Not even the imaginary rock monsters.

A sharp pain bore deep in Earl’s heart. He gasped, grabbing at the agony, sinking to his knees. It had taken these ten years in a new century for his past to truly catch up with him. He had run from it in the 1860’s and ran harder in the 1870’s, but there it was in the form of his little girl. All the things he had never wanted to face slammed into him as if a demon crawled into his skin and dressed in his bones. He had become a beast he didn’t want his wife and daughters to know. To shield them, he had set out to mine gold, so he could support his wife and daughters without them having to deal with his inhuman heart.

Only things had gone wrong, and the beast had taken him over. Outlawing had become his way. And lies. And when the law had caught up to him, he couldn’t admit to being Mary’s husband or his girls’ father. How could he? He was a blight on their innocence, a tarnish on their shine.

No matter what his wife had said, he couldn’t hoist himself on her, couldn’t let her be married to a beast. He had run again, because he would never deserve his family and never find his way back to the decent man he had once been. 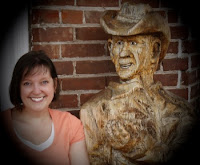 M. Pax is author of the space adventure series The Backworlds and the urban fantasy series The Rifters. Fantasy, science fiction, and the weird beckons to her, and she blames Oregon, a source of endless inspiration. She ghost hunts for fun with a group of curiosity seekers, docents at Pine Mountain Observatory in the summers as a star guide, has a cat with a crush on Mr. Spock, and is slightly obsessed with Jane Austen.


The first two books in the Rifters series can be read for free by becoming an M. Pax Reader.

Unknown said…
Omg, I hadn't heard of this series before, but love anything with magic and monsters. I know what I'm going to buy today!! Love discovering new books and authors. Thank you for the post!
4:57 AM

Unknown said…
I enjoyed the excerpt, thank you.
7:56 AM

Anonymous said…
Enjoyed the excerpt and thanks for the chance to win.
8:31 AM

M Pax said…
Thanks for hosting me! That's really awesome of you. PS, my website is currently down as some folks try to fix an issue with it. So links to mpaxauthor aren't currently working. Will let you know when it's back.
12:11 PM

Rose-Marie said…
This sounds interesting especially as I've had to spend quite a bit of time at the library and getting to know the librarians a little, I could imagine them in this novel!
2:18 PM

Laurie G said…
The Rifters are heroes trying to save our world. WOW! This is a whole new series for me. Sounds exciting!
5:24 AM