This post is part of a virtual book tour organized by Goddess Fish Promotions. Sandy will be awarding a $25 Amazon or B/N GC to a randomly drawn winner via rafflecopter during the tour. Click on the banner to see the other stops on the tour.

After graduation from business school and escape from engagement, Jennifer DeVision wants peace on earth for the holidays. Joining friends at the Rose Chateau seems like the calm answer to a question she hasn’t asked.

When the mysterious owner of the bed-and-breakfast begins to bring out more than the Christmas spirit in Jennifer, the forces that have been holding her in check get angry. Caleb Odan and his enabling staff of merrymakers might turn this vacation back into the romantic and magical time it’s supposed to be, if they can figure out what they’ve invited into their midst before it threatens both Jennifer and Caleb’s existence.

Roger paced. Niles brushed a lint-roller down the arm of Caleb’s modern tuxedo jacket as if there was anything on it. Lisa frowned. “I don’t get it. You’ve had three bottles of your wine. Why isn’t the color coming into your cheeks?”

“Because it’s not the real deal,” Caleb muttered. “But I can’t very well hop out of the limousine and drain some stray innocent on the way to the theatre, can I? Pardon me, but sit here just a moment, Jenna, my darling, I have to kill someone before we go in.”

Niles grimaced. “At least he has his sharp wit about him for the evening.”

“It would help if Roger wasn’t singing ‘it’s a mistake’ in his mind over and over and over…and what does ‘men at work’ have to do with this situation? I don’t understand it.”

Roger threw his hands up in frustration. “I can’t help it. It is a mistake. You’re going on a date? In public? With a guest? To sit in the mayor’s private box at the theatre? This couldn’t be any more cliché unless one of your past vampire friends shows up and starts ripping people apart on stage like it’s French theatrics!”

“Well, come on. Doesn’t anyone else feel it in their gut that this is going to end up on the five o’clock news?”

“Relax,” Caleb droned. “The five o’clock news is over. Best we can do now is ten o’clock or some sort of late-breaking story that interrupts the regularly scheduled programming.”

Roger stared at Caleb a moment. “Did you just make a joke? A modern-day—”

“All right, both of you, settle down,” Lisa said. “Roger, stop antagonizing the vampire before he decides to bite you to get his color in his cheeks. Caleb, stop tormenting the man who’s just looking out for your best inte 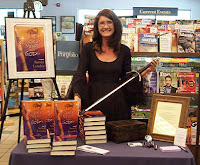 About the Author:Sandy Lender has a 23-year career in journalism and public relations. She teaches media training to university officials and corporate CEOs, but also has a keen understanding of online marketing. She taught how to use social media for one’s business at the 2011 CONEXPO/CON-AGG, which is the largest tradeshow in the United States. She also presents workshops on writing, editing and the surprising topic of reptile husbandry. Lender is a sea turtle conservationist and published fantasy author anticipating the release of her final Choices novel this winter. While we await Choices Meant for All, she’s offered the spine-tingling yet amusing paranormal holiday romance May Your Heart Be Light. Check her out at Facebook. Buy the book at Amazon.