This post is part of a virtual book tour organized by Goddess Fish Promotions. Tricia O'Malley will be awarding a $50 Amazon or Barnes and Noble GC to a randomly drawn winner via rafflecopter during the tour. Click on the tour banner to see the other stops on the tour.

An ancient book, a power untouched, and a heart unloved lead Keelin O'Brien from her graduate studies in Boston to a small village on the coast of Southern Ireland. Determined to unearth the secrets lying hidden in the enchanted waters of the cove, Keelin has little time for a surly Irishman who infuriates her during the day and haunts her fantasies at night.

Inexplicably drawn to the woman who has stepped from his dreams and into his world, Flynn fights a stubborn battle against his increasing attraction for Keelin. Forces unknown have better plans for the two.

Only the secrets of the cove can show Keelin who she really is, the beauty of her mysterious power, and a love that will break the bounds of what she knows.

"I suppose I should thank you," Keelin stuttered. She tried to regain her composure as she lifted her chin at him. "Of all the…how do I end up with the woman that is stubborn as all get-out?" Flynn said to himself as he started the motor and whipped towards shore. Keelin pulled the towel that he had handed around her and tried to get warm. "You know, most women would have thrown themselves on me in gratitude. You know, promising anything I wanted? Offers of undying devotion? Baked goods? No. You can barely thank me." Flynn glared at her. Keelin stared regally at him from across the boat. "I am sure I would have been fine. I just needed to cut across the current is all, and I was a bit disoriented." "A bit? You were a quarter mile out! You were shark bait. A goner! What were you even thinking? Are you insane?" Flynn lost it as they motored quietly into the cove. His shouts echoed off the walls of the empty cove and Ronan went silent on the beach. "Hey! You aren't the boss of me! I'll have you know that I am a trained diver. I study this. This is what I do." "Trained? Hardly! If you were trained you would know not to go diving alone and perhaps maybe to study the waters ahead of time and know that there is a nine-knot current that runs outside the cove. Had I not been out fishing today and heard your cry for help you would have been gone in minutes!" Flynn cut the motor and raged at her. Keelin stood up on shaky legs and yelled at him. "I'll have you know that I am a professional!" "A professional pain in the ass!" They were nose to nose in the rocking boat. Keelin's breath huffed out and her chest heaved. Flynn sighed and laid his forehead against hers, surprising her. "Just. Just don't ever do that again. Please." About the Author: 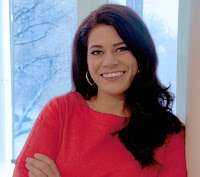 A New York Times Bestselling author, Tricia O'Malley lives in Milwaukee with her husband Josh, and their much doted-upon dogs, Briggs and Blue. On a typical day you will find her lost in the worlds of her making or working with up-and-coming authors. She loves the entrepreneurial life, is strongly resistant to the cubicle-world, and thrives on creating the life that she's always wanted to live.

The book will be free during the tour.

Goddess Fish Promotions said…
Thanks for hosting!
5:02 AM

Maria said…
I enjoyed the excerpt - they both have strong personalities and they have pretty fiery verbal chemistry in the scene - I like how he kept reminding her of the stupid things she did since she's a "professional" and should know better than dive by herself...lol...I love the cover for this book and this sounds like a really interesting series - thanks for the spotlight on the book (picked up this one to read over the holidays).
11:41 AM

MomJane said…
What a warm, sweet and fun excerpt. Love both characters.
6:22 PM

Victoria Alexander said…
This comment has been removed by the author.
9:15 PM

Victoria Alexander said…
Great post, thanks for sharing the excerpt - I enjoyed reading it!
9:16 PM

Nikolina said…
I am really enjoying following this tour, thank you!

Unknown said…
What a beautiful cover and a wonderful excerpt. I can't wait to read more. Thank you for the post and the giveaway!
8:43 PM

Ally Swanson said…
Excellent excerpt! This book sounds like such a fun, interesting, and intriguing read! Also, I really like the book cover! So pretty and inspiring! Totally can't wait to read this book!
4:41 PM

Ally Swanson said…
Excellent excerpt! This book sounds like such a fun, interesting, and intriguing read! Also, I really like the book cover! So pretty and inspiring! Totally can't wait to read this book!
4:42 PM