This post is part of a virtual book tour organized by Goddess Fish Promotions. Patricia Murphy will be awarding a $20 Amazon or Barnes and Noble GC to a randomly drawn winner via rafflecopter during the tour. Click on the tour banner to see the other stops on the tour.


The World Outside my Window

I always try to find a space to write which has a view, and I’m lucky to live by the river in Oxford. My house is on an island on the Thames though you wouldn’t realize it, as the river isn’t very wide. There are two hundred-odd houses, mostly 19th-century terraces, packed close together. But you do have to cross a bridge to get on and off Osney Island, which gives it a special kind of character. 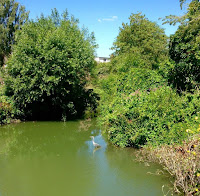 It used to be known as “Frog Island” and even though its only five minutes from the centre of Oxford there’s abundant wildlife. If I step into my back garden, I am more likely to see swans and ducks than frogs. A heron often swoops down to fish at the bottom by a willow tree, balancing on one leg, his shoulders hunched. Herons are the birds of knowledge, so I always hope he imparts some wisdom to me. 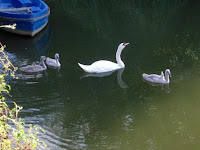 At certain times of day, a kingfisher in a flash of luminous blue streaks by. Sometimes it alights on my fence, and I stand stock still, marveling at its iridescent plumage, glowing blue and orange, the colour of jewels. I love the moorhens that potter about, their awkward, jerky movements making them look like nervous nuns. There are also wood pigeons that settle on my gable roof outside my attic window towards evening. Creatures of habit, they are punctual, and their throaty gurgle reminds me its time to make the dinner. At nighttime, bats come in to feed on the midges. Early in the morning red kites hover in the sky catching thermals as they sight their prey, their majestic wingspan flaring in the rising sun.

The water is filled with the ripples of fish. Fishermen tell me the river teems with chubb, tench, even trout at certain times of the year. There are also ferocious pike that have been known to snatch a laggard duckling. People have also seen otters in these waters sleekly darting under the overhanging weeping willows. I think I have myself though they move so swiftly it is hard to be sure. But it's very restful to gaze at the changing face of the river and the sky above it when I need to refresh my brain. 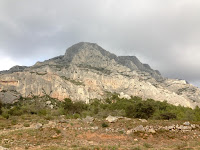 For most of this year, we were living in Venelles near Aix en Provence in the South of France. There I had an amazing view of Mont Saint Victoire, the limestone ridge obsessively painted by Cezanne. I can understand why. It's a multi-faceted sacred mountain that buckled up from the ground when the earth was new. It changes its aspect according to the light and time of year, sometimes orange in the morning sun, deep purple at dusk. It looms fortress-like out of the ground and at over a thousand metres high dominates the Aix skyline.

We also spend many summers in Kerry the southern-most county of Ireland that reaches into the wild Atlantic. The dramatic seascapes and the tender and searching light of Kerry have a particular beauty. Sunsets are a treat. All the more precious as it is a landscape rinsed with rain and sunny days are rare enough. But after a fine day, when the sun sinks towards the horizon, it blazes from gold to ruby and lights up the sky like fireworks.

Wherever I am and whatever window I look out of, it is nature that I search for. There’s nothing like a dramatic sky or a swooping bird for firing up the imagination and putting everything in perspective.

Football mad, twelve- year- old Dan is a trusted messenger for Ireland’s rebel leader, Michael Collins. He promises his cousin Molly to never fire a gun, but after the dramatic events of “Bloody Sunday” in Croke Park, he is pulled deeper into the struggle. Hunted by a vengeful Intelligence Officer, Molly and Dan are forced to flee Dublin. But unknown to Dan, he holds the key to a deadly plot. And his enemy will stop at nothing to track him down. On the run, they meet Flying Columns and narrowly escape death But as Cork burns can Dan continue to outrun his enemy?

The mean-faced Tan moved forward and cocked a gun in my direction. “You with the ball! Stop, you little Fenian brat, or I’ll shoot!”

He advanced towards me, his eyes flaming down the barrel of the gun. I thought I was going to wet myself with fear.

On impulse, I skied the ball straight up to heaven. It soared higher than the rooftops. Everyone tilted their heads. From the corner of my eye I glimpsed the young rebel making a run for it towards Saint Andrew’s church on the opposite side of the road.

I prayed it wasn’t the rebel. But the lifeless thud of my ball was almost as bad. The Tan had shot my dearest possession. But they hadn’t even seen the gunman! 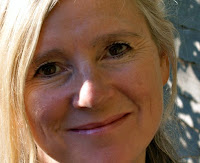 Patricia Murphy is an award-winning children’s author and Producer/Director of documentaries. Her most recent novel is Deadly Shot – Dan’s Diary - the War of Independence 1920-22. Previous works include the critically acclaimed Easter Week 1916 – Molly’s Diary, described as “brilliantly imagined”, “beautifully written and compelling” and “ fantastic at bringing history alive for children”. She is also the author of The Chingles Celtic Fantasy trilogy. She was the winner of the Poolbeg “Write a Bestseller for Children” Competition 2004. She is also an award-winning Producer/Director of primetime documentaries for BBC and Channel 4. These include Children of Helen House on the Oxford children’s hospice for BBC. She created and filmed the launch programmes of Born to Be Different the Channel 4 flagship series following six children with disabilities through the 21st century. Other films include Behind the Crime about criminals and Raised by the State on growing up in care. She has also made Worst Jobs in History with Tony Robinson for Channel 4.

Victoria Alexander said…
Lovely photos, I would love to be surrounded by nature like that (I'm stuck in LA *sigh* lol).. thanks for sharing!
12:57 PM

Stormy Vixen said…
I enjoyed the post, what a nice place to live, thanks for sharing!
2:07 PM

Unknown said…
Thanks for all your kind words. I am indeed lucky to live in a beautiful place. But it is rather damp! I wouldn't mind some L.A. sunshine. One of my friends here grew up in L.A. and she's convinced we're all Vitimin D deprived.
Patricia
6:08 PM

Unknown said…
What a lovely post and lovely photos! Thank you for sharing your views!
10:23 PM