Win a $20 GC - The Christmas Cradle by Charlotte Hubbard

This post is part of a virtual book tour organized by Goddess Fish Promotions. Charlotte will be awarding $20 Amazon or B/N GC to a randomly drawn winner via rafflecopter during the tour. Click on the tour banner to see the other stops on the tour and read more of the book. 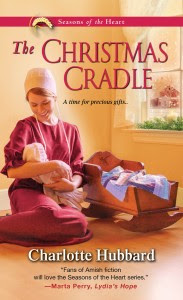 For the peaceful town of Willow Ridge, November presents an early holiday surprise. Stranded in the snow, 18-year-old Lena Esh and her boyfriend Josiah Witmer need more than a place to stay for the night. Lena defied her strict family and their judgmental beliefs to run away with Josiah and have his baby. But she’s starting to wonder if he can prove as responsible as he is passionate. And she isn’t sure how—or if—they can ever find a place to truly call home.

Expecting their own miracle baby, Miriam and Ben Hooley rally the town to help the young couple, and Lena draws strength from their unexpected support. Though trouble may come calling, in this season of joyous rebirth, a little child will lead them. And two couples will see their dreams of forever family come true…

Josiah paused in the doorway, watching Hannah and Naomi Brenneman plate an order at the stove while Rebecca and Rhoda refilled coffee and chatted with customers in the dining room. He’d be hard pressed to match the efficiency of the Sweet Seasons’ breakfast and lunch shifts—mostly because the cooks and waitresses never exchanged cross words or glared at each other. Why were he and Savilla—and he and Lena—so often at odds?

“Glad to see ya, Josiah,” Miriam said as she returned to her work area. She dipped flour from a fifty-pound sack into a big bowl and began to cut lard into it. “Do the girls know you’re back?”

“Yeah—and I’ve once again cranked their handles in the wrong direction,” Josiah replied with a sigh. “I can’t believe Savilla thought I’d ducked out of catering the wedding. Her reaction to my selling our farm in Bloomfield was something to behold, too.”

Miriam sucked in her breath. “Ever thought about givin’ her and Lena some warning before ya do stuff like that? How would ya feel if Savilla up and left—and after the fact told ya she’d married somebody and wouldn’t be cookin’ with ya anymore?”

Josiah scowled. “She’d never do that! She refuses to date the old guy down the road who’s tried to court her.”

Miriam stopped mixing her piecrust. “Ya just don’t get it, do ya? If Savilla decided her chances were better with that old guy than with you—if she just took off—what would ya do, Josiah?” she demanded.

He blinked. If Savilla quit—for whatever reason—he couldn’t continue catering on the scale he’d become accustomed to. And running a supper shift without her would be impossible. But he suspected that wasn’t really the point Miriam was trying to make.

“Okay, so she’s reminded me that I have this habit of doing my own thing without consulting her,” Josiah admitted. To switch to a more comfortable subject, he gestured toward the big lumps beneath wet tea towels on the countertop. “What’s all this? Pie crust?”

“A bunch of us gals are havin’ a frolic here after we close this afternoon,” she explained. “We’ll bake Nora and Luke’s pies today, and I’ll make the wedding cake tomorrow.”

Once again Josiah was impressed by the level of cooperation among folks in Willow Ridge—and by the way Miriam always contributed time and ingredients. “Now tell me straight out. Will it be a problem to store my cooked meat in your fridges?” he asked. “I’ll have two whole hogs cooked by tomorrow around this time, and I’ll need some work space to bone them—and to prep the chickens and briskets.”

“Plenty of room to go around. We’re cartin’ the pies to the Brennemans’ shop in the morning,” Miriam replied. “I’ll be decoratin’ the cake in this corner, so that leaves the whole counter over there for ya. I want to see how ya do those pigs,” she added with a grin. Then she raised a purposeful eyebrow. “Hug your sister for speakin’ in your behalf. We’ve already cleared out a whole fridge for your meat.”

Suddenly overcome by Miriam’s good-hearted generosity, Josiah stooped to hug her. “Denki for—well, for lookin’ after me,” he said, surprised at how tight his voice sounded.

“Well, now,” Miriam murmured, patting his wrist with her floury hand. “This is kinda nice comin’ from you, Josiah.” 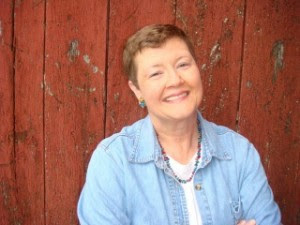 Drawing upon her experiences in Jamesport, the largest Old Order Amish community in Missouri, longtime Missourian Charlotte Hubbard writes of simpler times and a faith-based lifestyle in her Seasons of the Heart series. Like her heroine, Miriam Lantz Hooley, Charlotte considers it her personal mission to feed people. Faith and family, farming and food preservation are hallmarks of her lifestyle. She’s a deacon, a dedicated church musician and choir member, and when she’s not writing, she loves to try new recipes, crochet, and sew. Charlotte now lives in Minnesota with her husband and their border collie.

Goddess Fish Promotions said…
Thanks for hosting!
5:44 AM

CharlotteHubbard said…
Thanks so much for becoming part of my tour on the spur of the moment and featuring my book today!
8:19 AM

CharlotteHubbard said…
Thanks for stopping by again today, Rita!
5:58 PM

Victoria Alexander said…
Thanks for sharing the excerpt!
10:37 PM