This post is part of a virtual book tour organized by Goddess Fish Promotions. The author will award three randomly drawn winners via Rafflecopter an epub copy of The SEAL's Angel. Click on the tour banner to see the other stops on the tour.

The SEAL's Angel is the third story in the Mystery Angel Romance [MAR] series. Each stand-alone love story in the series has an angel hidden in the plot, and the angel's identity isn't revealed until the finale -- unless the reader figures it out first.

In The SEAL's Angel, Navy SEAL Sean MacKay's teammate is murdered after stealing a deadly nerve-gas formula from Syrian terrorists. Naval Intelligence believes MacKay's teammate was a traitor and shipped the stolen formula to his sister in the states for safekeeping. MacKay is given orders to find the sister before the terrorists do and to retrieve the stolen formula at all costs.

Foreclosure looms for Cory Rigatero as she fights to keep her rustic resort near Mt. St. Helens afloat after her brother deserted her to join the SEAL Teams. Cory's whole world dives into a tailspin when Sean MacKay shows up at her resort with the news of her brother's death and the wild suspicion her brother may have sent her traitorous classified documents. No way will Cory trust MacKay -- the man who once seduced her and then vanished into the night without a trace.

Mac's face appeared at her shoulder, his cheek close enough that if she moved her lips a very few inches she could plant a kiss there.

Now where had that thought come from? Easy, girl.

The rich smell of man, out-of-doors, and a hint of the morning's after-shave had wafted over her and had her thinking sensual thoughts like cheek-smooching. Okay, way more sensual than just cheeks as her gaze zeroed in on lips made for kissing. Lips still so soft and noticeable though surrounded by the close-clipped dark beard. Lips that easily curved into a smile capable of stealing her breath away. Lips like that had to be made for kissing. His eyes studied hers intently.

As though he had heard, his sexy lips curved into that breath-stealing smile.

Kiss me. Please, kiss me.

The wayward thought made her gasp in surprise.

Great. He'd heard. How embarrassing. She had gasped like an adolescent teen.

He straightened and pulled the bag into his arms, then dropped it into the wagon. "These are too heavy for you."

"Not really. I'd have to load them if you weren't here."

His voice had gone husky, and her skin tingled. He was only inches away again. When had he moved? So quick, so silent.

His predatory-blue eyes trained on her, skimming over her face -- over her -- as though memorizing the way she looked. Or was he searching for answers to unasked questions?

She held her breath. 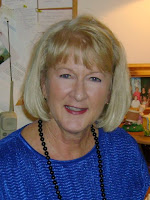 Petie spent a large part of her career working as a biologist at Walt Disney World -- "The Most Magical Place on Earth" -- where she enjoyed working in the land of fairy tales by day and creating her own romantic fairy tales by night. She eventually said good-bye to her "day" job in order to write her stories full-time.

Petie is a member of Romance Writers of America, and she shares homes in Tennessee and Florida with her horticulturist husband, a spoiled-rotten English Springer spaniel addicted to pimento-stuffed green olives, and a noisy Nanday conure named Sassy who made a cameo appearance in Angel to the Rescue.

Goddess Fish Promotions said…
Thanks for hosting!
7:18 AM