This post is part of a virtual book tour organized by Goddess Fish Promotions. Jonah Kruvant will award a randomly drawn commenter via Rafflecopter a $10 Amazon/BN GC plus a copy of his book. Click on the tour banner to see the other stops on the tour.


*****
A soft breeze that rustles the leaves, a grill hardly used but told to be useful, the smell of dew, two aspens towering above in a green wood, all the elements of the porch where I write, in the log cabin where I poured over the details of my novel, putting it all together, that five-year long puzzle, and once occupied by my grandfather, who rested his shotgun above the fireplace, and held me on his lap while he mowed the lawn under the September sky, the same place where I now put the pen to the page and question my ability to write, asking if I’m good enough, or good at all, for who am I but a man trying to express himself and find meaning in this mystery of existence, escaping from his reality, the chaos of the city, the social media that has spread through our organs like a disease, distracting people from what’s in front of them, since now we have two worlds, the virtual and the real, and we have to make a choice how much to invest in either, but the important thing is to choose, not to check facebook (which I refuse to capitalize) because your friends do, or tweet because you’re bored, or sift through emails instead of reading a book and learning about the wonders of the world! Don’t forget that you come from the Earth – go for hikes, smell the fresh air of a scented forest, walk along the beach as the your toes sink into the sand, leave that place where your heart won’t stop beating, where you life has become an object, that phone, an inconceivable thought ten years past, yet this is all the younger generation knows – how will we show them that there is more?

Alas, I sit on the porch of the cabin, where I wrote my book, and am disturbed by the same thoughts I had then, but at least I have the pages I wrote – but is it enough? I should enjoy the success and not sacrifice happiness, but I must also seek something more, discover hidden truths, and write what I must write, for I can do better, and what do we have but time – should we not try to make the most of it? To make our mark, sure, everyone understands that in our modern career-driven existence, but what about giving to others, helping the sick and the poor, fighting for justice, teaching our youth to have a moral center, and helping the Earth, which we all share? Let us not lose touch, nor forget the many ways we ought to contribute to humanity, and let us learn to recognize that what we do matters, and try to improve this gift we’ve been given, the world, and our ever so precious lives.

And so I write.

In a futuristic American society where all citizens have computerized chips in their brains and insert needles into their veins to enter a virtual reality, Victor Vale leads a fairly typical life. He is an officer of the law with greater ambitions, a family man, and a dutiful citizen of the Nation. Yet when The Chief assigns him a case to go undercover and expose a community of illegal “creators,” Victor finds himself strangely compelled to creative writing. For the first time, he starts to question the world around him, and becomes involved in a web of lies, uncertain of whom to trust, and unable to distinguish between virtualism and reality. As he searches for answers, Victor slowly begins to unravel hidden truths about the world, and even uncovers an astonishing secret from his own past.

In order to prove to the “creators” that he is genuine, Victor writes a manuscript, at great risk to his wife and son. When books are banned and ultimately destroyed, Victor realizes that his book alone has survived. Only then does the reader come to a startling realization in a unique narrative twist.

Not long after the Cleansing Act, I was promoted to Detective. I was thirty-four. I had a wife and child to support. A career to pursue. My son wanted things, my wife wanted things; hell, I wanted things. I had worked on the force for thirteen years and it was time I got my detective badge.

That was all I could see back then. I didn’t care about creators.

Then I was assigned to the case. But even before I stepped into the Chief’s office, events began taking shape that marked both the beginning and the end of a new chapter in my life. It was on my way to the police station, wading through the unbearable stench of the dirty human flesh of the Slums, that I began to question things, what I thought I knew about the world … and about myself.

That day, for whatever reason, I felt conscious of my surroundings. The beggars were pushing each other out of the way to get under awnings and balconies of restaurants and apartments as it started to rain. The restaurants were filled with shattered glass, moldy kitchens. The strongest beggars lived in cramped apartments with cockroaches and termites. The ones that couldn’t find shelter that morning just lay there, shivering from the cold. Some would let raindrops fall from the sky into their open mouths. Two naïve children were chasing each other around bodies and giggling, cleaning dirt out of each other’s hair. The bright lights of the skyscrapers, the swiftness of the skytrain, the convenience of the airpath—all a beggar had to do was look up and he would find himself in a fantastical world of dreams. 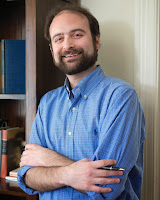 A writer, teacher and student of the world, JONAH KRUVANT received his BA from Skidmore, his teaching degree from Fordham and an MFA from Goddard College. Jonah lives in New York City. He is the author of The Last Book Ever Written.

Patrick Siu said…
I have enjoyed learning about the book. Thanks for sharing it.
7:31 PM