This post is part of a virtual book tour organized by Goddess Fish Promotions. Grant and Gary Reed will be awarding a $15 Amazon or Barnes and Noble GC to a randomly drawn winner via rafflecopter during the tour. Click on the banner to see the other stops on the tour. 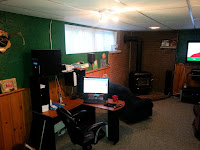 Hi and thanks for having us on your site! The view in my writing space isn’t all that interesting to be honest. I have a desk setup in my basement –which is finished- and I can see my 50” flat screen on the wall about fifteen feet away. It really is a comfy spot, and sometimes when my wife and I watch a movie downstairs, I will sit at my computer chair and watch from there. I have some art on the walls, a couple of Gary’s pictures, and a clay mask I made in art class (grade nine, many moons ago). Behind me I have some hunting photos of my brother, father and I, and two deer racks I had the taxidermist put together for me –my first 8 pointer and a larger 8 pointer. 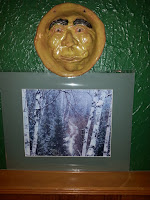 Unfortunately, because it is a basement, the windows are up high and are covered with semi-transparent curtains. So it’s not much of a view.

The good news is that with today’s technology, it’s easy to have a portable office! I have been known to use my laptop to write at camp, the park, and even at the beach, though I must say, the prettier the setting, the less work I get done. I can guarantee myself a good day’s work in the cold, dark basement, and then I go out to play!


Unlike Grant, I do have a great big window beside my desk. It looks out on my front lawn and the street beyond. We have a corner lot, so I can see down three different routes. We live in a suburb of a small town, so there are lots of trees, and it doesn’t feel crowded like the big city. I will often see birds and squirrels, and sometimes bigger animals (a bear a month ago) cross the lawn.

My real office is the great outdoors, as I am out daily working on my photography. I spend very little time writing these days, focusing more on my passion for finding that elusive winning shot! I do have a photography book in the works, so I will have to force myself to sit at the desk and compile my shots and tips…right after I get a few more pictures!

After ninety years of warring, exploring, and saving the realm, brothers Yarl and Fonn, must take up the title of Master again. If they don’t, someone else will surely steal all the fame, glory, and fertile women. How will they ever train new apprentices, save the kingdom, and still find time to fit in that extra order of chicken wings? Make no mistake, the old Masters have a lot to pass on and only a short timeframe to do it.

Will young Garrett flourish as an apprentice Sworvei? Can his partner Azilda master the ‘Nesting Nightingale’? And who in hell invited the ogres?

Join this rag-tag group of ‘Protectors of the Realm’ to see if they can pull off the biggest upset of the Continental Games, by saving young King Renli from the clutches of the evil First General.

“His name is James Lacie. Once he was one of the top alchemists in Cassadia. He was highly sought after for his many time-saving inventions and numerous elixirs. At any given time his shop carried wart remover, air fresheners, love potions, and something closer to that which you seek.”

Miss Mia turned back to her mirror and dabbed at her rosy cheeks again, humming to herself. Milo reached to his belt and produced a small leather bag. Opening the pouch he emptied it into the palm of his left hand. A pair of opal earrings spilled forth. “Closer to that which I seek, you say?” he inquired.

“Yes, a chemical fruit that when eaten would unknowingly render the eater susceptible to suggestion. A great party favourite a few years back. The unsuspecting victim would eat the fruit and was then told to cluck like a chicken or act like a coconut. Its effects would sometimes last the duration of a good party.”

“Yes, the gag would be much funnier if the victim was unsuspecting,” mused Milo. “Tell me, where can I find this James Lacie’s shop?”

“He no longer has one,” replied Mia. “It had something to do with a potion mix up. The king’s cousin ended up falling in love with a sheep, as I recall. The royal family was not impressed, and you know how the Chronicle can be when it gets its hands on what it deems to be a front page story. Ruined the man’s career, or so I’m told. Anyway Mr. Lacie has been on the lam ever since.” 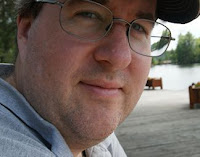 Grant Reed has a background in business management, computer programming, and computer networking. He would much rather be out fishing though, so he spends his time writing and exploring the lakes in his back yard of Canada. He lives in Lively Ontario, Canada with his wife Robin, and their two children Aidan and Megan. 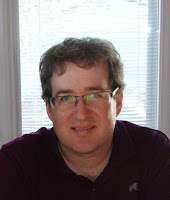 Gary Reed, his wife Kerry and their two children, Hannah and Kailey also live in Lively Ontario, Canada. And yes, he spends his time exploring the countryside too. Photography, fishing, and playing with his girls are amongst his interests.

Buy the book on Amazon

Patrick Siu said…
I have enjoyed learning about the book. Thanks for sharing it.
7:30 PM

Unknown said…
The entire post was exceptional but I especially enjoyed learning more about the authors. Thank you for sharing!
11:38 PM

Unknown said…
I enjoyed reading Grant's view and Gary's view! I would take my laptop outside and enjoy the great outdoors, too! Happy writing and photographing!
8:45 PM

Unknown said…
I really enjoyed the excerpt! Thank you for the post and contest!
9:34 PM