This post is part of a virtual book tour organized by Goddess Fish Promotions. C.C. Koen will be awarding a $10 Amazon or Barnes and Noble GC to a randomly drawn winner via rafflecopter during the tour. Click on the tour banner to see the other stops on the tour. 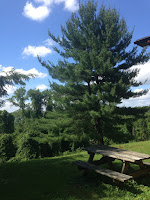 I would much rather write outside if I had a comfortable place to sit and electricity for my laptop. I’d like to be on the beach or in a cottage with fantastic mountain views, a glass of wine, and my laptop. But since that is not possible, the view outside my window consists of a picnic table and tall pine trees. Although quaint, I live on a busy street, so the back yard might look pretty, but the street noise doesn’t make it the most ideal place to stir creativity. Instead, I’m usually cooped indoors, on the couch with my laptop. I have back and shoulder issues and have to lay down while writing. Otherwise, the pain becomes pretty severe, which also does not help the creative juices. I usually have the TV or music on for background noise. When I’m editing, I need silence so I can read the manuscript aloud and listen to the story. It took me about a year and a half to write my first novel, Intensity and another year to write Unlikely Allies. I have to wonder if I’d write faster or slower if I was at a different location like the beach or mountains. Someday I’ll have to find out. 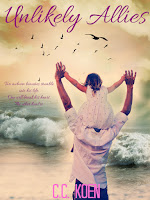 Maggie Tyson’s rule: no bad boys. When her daughter, Cecily wanders away from her and into Rick Stone’s office, Maggie knows he’s the exact type she’s trying to avoid. Rick Stone’s rule: bed them don’t wed them. Two auburn beauties stumble into his life. One will break his heart. The other—heal it.

“This place is packed. Why’d you pick it?”

Lodged in her brain for several weeks now, Mr. Stone’s guttural tenor replayed in her daydreams and in her sleep. She inched around performing a mental countdown from ten to zero, which helped cool her off when Cece pushed her buttons, and by some miracle she hoped would work in this instance too.

A steel gray oxford, no tie, and slim-fit pants with the same sheen as his button-down vest produced an unnatural reaction. Her tongue rolled to the roof of her mouth and withheld the groan his arousing professional attire and fresh-air scent planted in her head.

“Uh…” Mr. Stone narrowed his eyes at Matt and clamped a hand on his shoulder. His flushed face resembled the cherry red that often tinted joggers’ cheeks. “Buddy, you didn’t tell me Maggie would be here. Thought you said this was a business lunch.” He waved a folder and tossed it on the table.

Matt’s grin flashed toward her and then to his friend. “You do realize she’s cooking, right?”

Just then Mr. Stone’s gaze drifted across her chest, becoming transfixed for a while on the crisscrossed fork, spoon, and knife emblem at her left breast and then darted up to her face. If possible, his skin reddened even more as he dropped onto the wooden stool, an impact that scraped the chair back a few inches, rocking him into Matt’s shoulder.

“Let’s order. I’m starved.” An elbow shot given to his buddy, Matt knocked Mr. Stone’s bent arm off the edge of the table and pointed to the menu. “Pick something, fast. I need to get to dessert before it’s all gone.”

Using a similar mocking tone like Matt had earlier, Mr. Stone scanned the room while he spoke. “You realize we’re in a restaurant that has loads of food.”

She got a chuckle out of the amusing banter. Normally, she and Kat rubbed each other the wrong way. It was good to see the ribbing happening to someone else for a change.

The menu forgotten and dropped onto the table, Mr. Stone set his chin in his hand and repositioned his arm where it had been before Matt knocked it down. In a seductive murmur he asked, “What sinful goodies do you have for me, Maggie?” Extended across the counter, his hand cupped hers from underneath and gripped it like a beggar pleading for anything and everything she could give.

About the Author: C.C. Koen writes contemporary romance with a twist. An avid reader who enjoys mystery and suspense, her stories will never be what you expect. Determined to find adventure in her dreams and life, she enjoys skydiving, sailing and any activity that challenges her. Teacher by day, romance writer at night produce an active imagination that comes to life in her writing.

Buy the book at Amazon, Barnes and Noble, Kobo, Apple, or Goodreads.

Goddess Fish Promotions said…
Thanks for hosting!
6:44 AM

Andra Lyn said…
What was the hardest thing about writing this book??
12:17 PM

Anonymous said…
Thank you for participating in the Unlikely Allies tour.

Anonymous said…
The hardest part of writing this book was the scene with Maggie and her ex-husband. The scene was inspired by a Rihanna song but also related to a tragedy in my own life.
1:51 PM

Unknown said…
Great exxcerpt! I enjoyed reading View Outside My Window! Thank you for sharing!
6:25 PM

Unknown said…
I really enjoyed the excerpt! This sounds like a great book! Thank you for sharing!
11:04 PM

Unknown said…
Thank you for the post and the giveaway!
6:35 AM

Anonymous said…
thanks for the chance!
3:10 PM