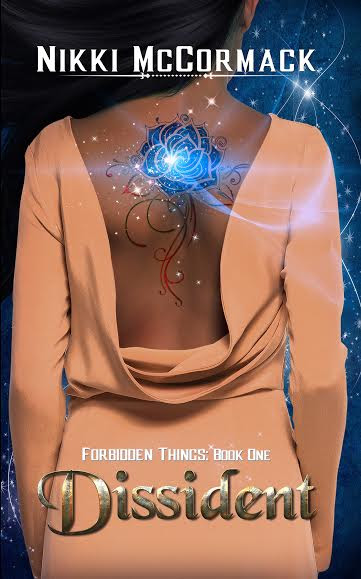 ">
This post is part of a Cover Reveal Book Blast organized by Goddess Fish Promotions for Nikki McCormack's newest book Forbidden Things: Dissident. The author is providing a $25 Amazon/BN gift card to a randomly drawn commenter via Rafflecopter. Click on the tour banner to see the other stops on the tour.

Ascard power can strengthen, heal and create. It also has great potential to destroy, enough to topple entire governments. Indigo’s country places strict limitations on the use of ascard so she must channel her talents into the healing arts or risk severe punishment. An orphan from a disgraced family, trapped by her father’s treason, Indigo struggles reclaim her place in a society that has driven her into an abusive engagement. Then a mysterious stranger from a neighboring country contacts her using ascard. He needs help escaping his prison so he can bring an end to his emperor's oppressive rule or die trying. His unshakable devotion to his cause and the passion hidden behind his cool arrogance move her to help him at the risk of being branded a traitor herself. When the politics of society bring them together a second time, Indigo decides to use her growing powers to help him fight his war. If only she dared fight for her own future with such passion. Perhaps she can find the courage to do so by helping the man she has fallen for win his revolution. She might have exactly the power he needs to succeed.

Goddess Fish Promotions said…
Thanks for hosting!
7:02 AM

Nikki McCormack said…
Thank you for being a part of the cover reveal!
10:07 AM

Thank you to Goddess Fish, the blog hosts, and everyone who visited for making this a great giveaway! I hope to see you all again in July for the official Dissident book release tour!
11:28 AM