This post is part of a virtual book tour organized by Goddess Fish Promotions. Angela will be awarding a $75 Amazon or B/N GC to a randomly drawn winner via rafflecopter during the tour. Click on the tour banner to see the other stops on the tour.

Welcome to My World of Dream, Angela. Please tell us a little about yourself and how you became a writer.


I’m a single mom and am employed full time with a title that’s pretty much the same as corporate peon (lol!). After putting my precious one to sleep each night, I change out those hats and frolic in the passion that challenges my imagination and is now a part of who I am: my writing. I finally took my writing dream seriously after having my daughter. I want her to go for her dreams, big or small, and I’m choosing to walk the walk instead of just talking the talk.

Would you share with our followers the inspiration(s) behind your latest book release?

Beacon, my YA urban fantasy dystopian, is inspired by The Hunger Games. I enjoyed the story of self-sacrifice and brute survival, but I wondered what it would be like if the situation were different. What if, instead of dreading to be picked, being selected was coveted by every citizen? What if there was so much more to the strict rules and regulations? What if the world, as it stood, became that way for reasons no one wants to make public? It was the questions that drove Beacon into being.

Are you a self-published author, which would include POD publishers, or are you with a traditional publisher?
I’m something of a hybrid author. I started with self-publishing but I also chose to query a title or two. I sent Beacon to Evernight Teen publishing and I was thrilled they wanted to pick it up for their catalog. Both self-publishing and querying are challenging paths and I’m keeping them both open as options for future projects.

Is this the genre you generally write in? Have you considered others?

I haven’t locked myself into one genre. Beacon is a genre masher of urban fantasy and dystopian. My Shadow Jumpers titles are paranormal. And I have a few ideas percolating that are of the contemporary category.

Do you have other published works?
Yes, I have my Shadow Jumpers titles and my NEO Chronicles: Characters Revealed novellas that I’ve self-published. Also, as part of Untethered Realms, I’ve published a short story titled In the Know in our Twisted Earths anthology.

Do you write under a pen name?

Yes. I write erotica/erotic romance under the pen name Rayven Godchild. Publishing these stories has been quite fun. But bear in mind, this stuff is for mature audiences only :-)

Illustrations and photo selections for covers are vital to successful to marketing. Do you use an illustrator or photographer for your book(s)? If so do you always use the same one, or do you shop around?

For my self-published works, I’ve contracted with only a couple of graphic designers to provide me with covers I love for my novels. I’ve only used one illustrator to design a character for me. She was referred by a trusted author I know. Working with Corona was absolutely wonderful. Actually, that’s how I find who I choose to work with, through word of mouth.

Do you spend a lot of time plotting your stories, or do you just run with it?
I’m a “plantser” lol! I do what I like to call “light plotting” early on with a skeletal outline of the story. This way, I have an idea of the beginning, middle, and end. But I keep things free-flow so that I can embark on muse-inspired detours. These breaks from the outline tend to reap some interesting turns and twists in the plot that end up being some of the interesting tidbits of my stories.

What Point of view do you feel most comfortable with, first person or third? Have you ever tried using the second person in any of your works?

I like first person POV a lot because of how deep into the character’s perspective you can get. But I’m just as comfortable in third person POV and find it advantageous for setting up scenarios that can’t be done while locked into the perspective of only one character with first person. I haven’t tried second person yet. That would require some research and reading to get a bit more familiar with that POV technique.

What do you think the future holds for a writer?

Writing is a marathon, not the 220 yd dash. For the writer intent on being the next one hit wonder, I wish them luck in getting that breakout novel published and earning as much money as possible. But for the writer aware that publishing is a process of writing, publishing, marketing, and repeat for each project they get behind, the future holds some wonderful opportunities for growth, discovery, and making dreams come true.

Tsunamis reduced the USA into a shell of itself, called The Fold. Surviving humans and vampires joined forces to form The Colony, where registered citizens do as they're told.

They donate blood quarterly and dream of being chosen as Attendees for the Jubilee celebrations, that is, everyone except Macie Breen. With high school graduation near, she’s anxious to ditch the rules in hopes of starting a new life with Thane, an unregistered and also her best friend.

Her hopes fizzle when Macie is selected as an Attendee, forever registered. Any future with Thane…impossible. Being chosen comes with another unexpected price.

Truths about The Colony blaze into ashes and lies when she discovers the vampires haven't kept their part of the bargain. Worst still, Macie’s life unravels as her stint in the city of Bliss forces her to face daunting truths about who, and what, she really is.

Thane tapped the door. “Would it help if I said I didn’t see anything?”

He snickered some more. I cringed. Embarrassment coursed through me, heating every inch of my skin.

“Would it help if I told you what I did see looked beautiful?”

I hesitated half a heartbeat. “Don’t lie to me!”

I stared at the door and wanted to giggle myself. Flutters erupted in my belly. 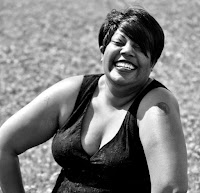 Born and raised in Little Rock, AR, Angela now calls Central Texas home. She's a lover of Wild Cherry Pepsi and chocolate/chocolate covered delicious-ness. Steampunk, fantasy and paranormal to contemporary - mostly young adult - fill her growing library of books. Mother to a rambunctious darling girl aptly nicknamed Chipmunk, life stays busy. Her favorite quote keeps her moving: "You may never know what results come of your action, but if you do nothing there will be no result." ~ Mahatma Gandhi

Goddess Fish Promotions said…
Thank you for hosting
5:58 AM

Angela Brown said…
Thanks so much for having me here today :-)
9:40 AM

Patrick Siu said…
I have enjoyed learning about the book. Thanks for sharing it.
2:51 PM