This post is part of a virtual book tour organized by Goddess Fish Promotions. One randomly drawn winner will be awarded a $25 Amazon/BN GC via Rafflecopter. Click on the tour banner to see the other stops on the tour.

In a flash of searing light, the world changed. A massive solar flare has crippled the modern world and brought chaos and destruction. David Hartsman is stuck in the remote farm town of his youth on what was expected to be a short visit to check on his ailing parents. While his wife and his daughter are hundreds of miles away at home in Chicago, David must face the dangers associated with his own survival and the pressures of not being with his family. In a worldwide catastrophe, every struggle is personal.

The rains came in little pulses over the next several days. Storms tore through the first night, darkening Kenton in a way I had never experienced. The northern lights were blocked out by the heavy clouds and the wind howled all the louder for the loss of sight.

The next two days saw a series of short showers. It brought plenty of fresh water to us, but delayed construction of individual latrines and outhouses. It also brought a melancholy that combined with worry and uncertainty.

A bright dawn greeted us on the third day and the sky looked clear in the north and west. The northern lights which had hung in the sky like specters the first two days were gone. Occasionally I would see a ribbon of color out of the corner of my eye, but it seemed more like a phantom feeling one would experience when they saw a bug and then lost track of it. A sensation would run along your leg or shoulder, but you knew it wasn’t really there.

Anne arrived about an hour after sunup with Clyde for me to ride. The gelding was starting to get used to me and for the first time seemed to recognize me as I approached.

“Not wearing your coat and hat today?” Anne asked. She smirked as she kept any tone of mocking out of her voice. I had been forced to wear an old jacket and baseball cap from my high school years during the last couple of days just to stay somewhat dry. 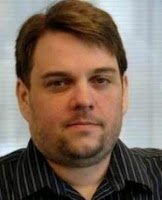 Wilson Harp is a writer based out of the American Midwest. As a military brat, he traveled and met people from many cultures and backgrounds. Exposure to so many different views has led him to an appreciation of an eclectic collection of music, film and literature.

His sense of wonder at stories and folklore started young and continues to this day, often affecting the themes and ideas in his writing. In his works you will find the old fashioned ideas of virtue and honor as the lifeline that pulls many of his characters through the situations they often find themselves.

Goddess Fish Promotions said…
Thanks for hosting!
5:46 AM

Unknown said…
Thanks for having me on your site, Judy!
8:26 AM