This post is part of a virtual book tour organized by Goddess Fish Promotions. Mark will be awarding a $50 Amazon or B/N GC to a randomly drawn winner via rafflecopter during the tour. Click on the tour banner to see the other stops on the tour. 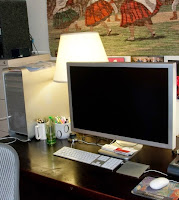 I work on a Mac Pro with a 30-inch flat-panel display that sits on a six-foot long wooden desk. Like all the furniture in my office, it was purchased used and refurbished.

Hanging on the wall behind my computer monitor is a five-foot wide, three-foot high weaving of three women and three men doing a Peruvian witch doctor dance. Villagers are seated on the nearby hillside watching them perform. In the background, mountains rise against a blue sky dotted with white clouds. 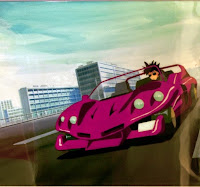 By my office door is a framed Japanese manga cel used in an animated racing cartoon. A friend brought it back for me from Japan.

Next to my closet is a framed artwork titled, “Defecate Spending” by Jeff Leedy of Sausalito, CA. It is a cynical view of government spending to stimulate the economy. 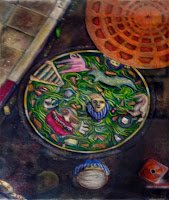 On the same wall is a colored pencil drawing of a boy looking into an open manhole. “Manhole” is by Leila Noorani of San Francisco, CA. I like how the boy sees his reflection in the debris inside the manhole. 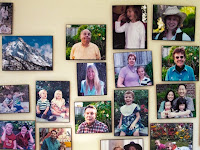 I do a lot of photography. I’ve mounted my best pictures on any blank space available in my office. They are of family, friends, parties, and places that I have visited. It provides a visual record of my niece and nephews growing up. 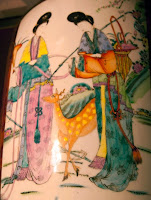 On a credenza, resides a Chinese box. Its surface is a fragment from a vase broken while buried during the Cultural Revolution. 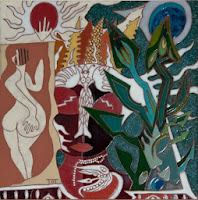 To the left of my office window, I have three 12” x 12”, glazed ceramic tiles created by Justine Tot Tatarsky of Woodacre, CA. I have been buying her art for many years. For the sake of brevity, I’ve just shown one of her pieces. I love the symbolic visual story depicted in her artwork.

On my desk is a Tiffany-style desk lamp. I bought the used shade on EBay, a few years ago. It looks magnificent lit up at night!

Last, I have a six-inch Swedish girl doll with a yellow and blue dress. It was a gift from my friend Anne who loves all things from Sweden. It reminds me of what she might have looked like as a little girl.

What happens when Joe, a teen prodigy makes drastic changes to his life and attends high school incognito with Mike, an artificial intelligence? His plans take an unexpected turn when he buys a neglected former racehorse.

Bringing Up Mike is a tapestry of intertwined stories over the course of a school year: A teen genius who has grown up too fast, a neglected former racehorse, a bereaved couple morning the death of their son, a girl struggling to attend college, and a former mobster determined to be top dog.

Bringing Up Mike is about people given a second chance at happiness and success and how they become better people and mature.

“Tonight, ladies and gentlemen, I present to you…” said Mike in the voice of Josef Fischer in The Illusionist.

Sue looked at the first website. “That’s a bit gaudy. It looks like a coloring book. How about something with all the headings and text in black with white backgrounds?”

“That’s better. But I didn’t mean no color—rather, to reserve it for use in photos, graphics, maps, and clip art. Put one big visual at the top, and a small one elsewhere on the page. A feature story under the main headline, with room for two or three smaller stories to follow it. Some tabs for the various departments.”

“And behind door number three.”

“Yes, you got it.” Sue looked puzzled. “Mike, how can you possibly prototype a website so quickly?”

“My dear, a magician never reveals his secrets,” said Mike in the voice of Gypsy from A Bug’s Life.

“What are you, superhuman?”

“They’re just off-the-shelf WordPress templates. I selected a subset developed for online newspapers. You change the CSS and bibbity-bobbity-boo, presto-chang-o, a new website!” Now he used the voice of the fairy godmother from Cinderella. 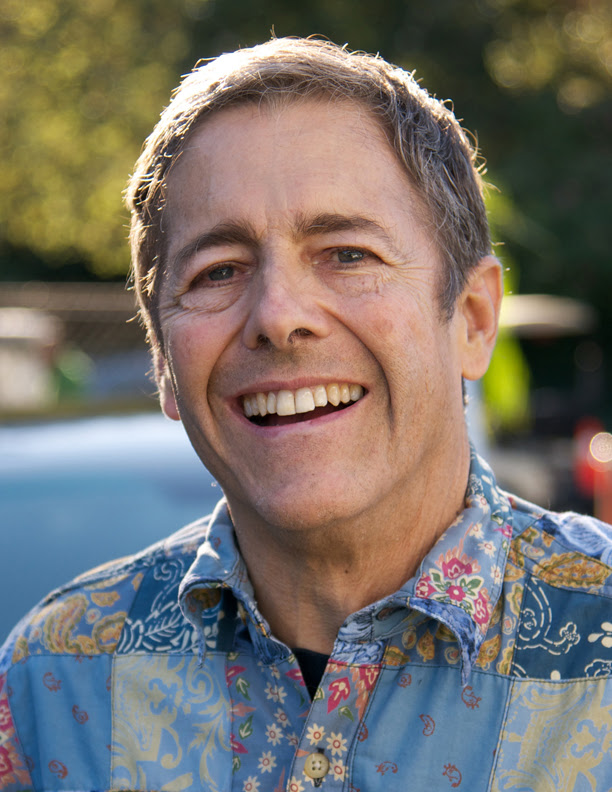 About the Author:Mark Duncan grew up in Pasadena, not far from Caltech. In high school he spent Friday and Saturday nights at the Stanford Artificial Intelligence Lab (SAIL) and subsequently was a member of the Homebrew Computer Club. He received his BSEE from UC Berkeley. He has worked or consulted for numerous startups in Silicon Valley. He lives in Menlo Park, near Stanford and has written extensively on emerging technology topics. He enjoys photography, movies, theater, fine dining and has visited all 50 states and much of Europe. He is the author of Bringing Up Mike, www.askmarpublishing.com, mark@askmarpublishing.com

Buy the book at Amazon, Amazon UK, iTunes, Barnes and Noble, or Kobo.
a Rafflecopter giveaway

Rita Wray said…
I enjoyed the peek inside your writing space. I like the Swedish doll, looks like she's wearing the national costume. I was born in Finland so I have many Finnish dolls.
11:36 AM

Anonymous said…
I love all the art in the office!

♡♥♬ Carolsue ♡♥♬ said…
My favorite thing was the book's excerpt. Sounds like a winner!
Digicats {at} Sbcglobal {dot} Net
3:44 AM

Angel McGuffey said…
It's fun learning about the author. Thx for the giveaway too. 😊🎄👍
7:27 AM