This post is part of a virtual book tour organized by Goddess Fish Promotions. The author will be awarding a backlist ebook copy to a randomly drawn winner at every stop during the tour and a Grand Prize of a $25 Amazon GC will be awarded to one randomly drawn winner via rafflecopter during this tour. Please leave your email address for the ebook prize. Click on the tour banner to see the other stops on the tour.


What would my ideal day look like?
by J.P. Lantern

I'm trying very hard to eliminate all the NSFW stuff that is coming to my head. A lot of my writing process is elimination of highly inappropriate subject matter.

I really like yoga, and I think it does wonders for my body and my posture and the amount of chronic pain I suffer from. So I think my ideal day would start somewhere around 9:30 AM, when I get out of bed and somehow, magically, there's a very nice yoga instructor hanging out in my living room, ready to get to work.

So we yoga for a bit, like a good hour to hour and a half. Afterward, breakfast. Probably banana-egg pancakes with a little applesauce on top. I listen to a podcast (something related to history or comedy, probably) and say goodbye to the yoga instructor, who does not complain that I didn't make him pancakes (gotta conserve those eggs, man).

Then, sitting down in front of my desk. Probably adjusting it upward so that it's ready for writing. There's coffee on the pot (perhaps the yoga instructor made it for me; he's a nice enough fellow), and I have a cup while reading some non-fiction. I read non-fiction in the early part of the day because I don't have the patience for it later on. I've learned to stack the more undesirable tasks earlier in the day.

Anyway, then, writing! Sit down, put down about five hundred to a thousand words, and then walk away for a bit. Stretch. More coffee. Then back to the desk; more writing for another thousand words or so. Stretch. More coffee. Play with the dog. Repeat! If this is my ideal day (and it is), then somehow, magically, all my social networking responsibilities for the next five years would be taken care of automatically by the flip of some switch. I would prance around the switch like some new world shaman, dancing and chanting and thanking the gods.

This work would go on for about five or six hours (the writing, I mean; not the dancing and chanting). By that time, the wife is coming home. I'll do something very noble, very yoga-instructory, and prepare her some tea or a nice scone or whatever it is you are supposed to give to a wonderful wife.

She comes home, we rap about our days, and then we chill out and watch a new, wonderful movie or television show that completely enraptures our minds. Then we argue about it. Probably I am building something out of Legos all this time.

Disaster brings everybody together. A cloned corporate assassin; a boy genius and his new robot; a tech-modified gangster with nothing to lose; a beautiful, damaged woman and her unbalanced stalker—these folks couldn't be more different, but somehow they must work together to save their own skin. Stranded in the epicenter of a monumental earthquake in the dystopian slum, Junktown, there is only one way to survive. These unlikely teammates must go...UP THE TOWER.

Before anything else—before the riot, before the flood, before the gap and the deaths and the fires and the pain—before all of that, Ana just wanted to get the hell out of Junktown.

But she was stuck there with Raj, and Raj had all the bodyguards, so she couldn't very well leave on her own. Walk into Junktown without any protection? No, thank you. She had a knife on her, but that was hardly enough. The knife fit neatly in a small, luxury Cardion-brand sheath at her side.

The rest of her outfit was direct out from a fashion magazine. She wore tight black Cardion slacks, her patent leather Aushwere ankle boots sexy and stylish and perfect for inner-city walking. Her dark blue blouse was Cardion again (there had been a sale); already she had noticed the way Raj had been hugging his eyes to how it cupped and clung to her body. He would have been looking a bit more, perhaps, but she wore her favorite Kadaya Sarin-brand leather jacket, allowing her a bit of modesty with the long sleeves and tight collar, despite the thinness of the material. She was a woman dressed to impress, but also was no whore—she had her man. He liked her dressed attractive, but not like some slut. Ana knew what he wanted, because that was her entire life, as she saw it, from now on.

They were inside the ground floor of a tall building. Cleanbots rushed around them, sweeping up dust, guided along by retrofitted eyebots that spied out areas of dust and disrepair.

“Here's where we'll have the lobby,” said Raj, opening his hands out wide to the open space.

Ana had presence of mind to hold her tongue.

What she wanted to say was, “Really, dear? Here in the first possible place that someone could enter from the street? That's where you'll have the lobby? That's so inventive. You're so smart.”

What did she say was, “Oh! It will look beautiful, I'm sure.” 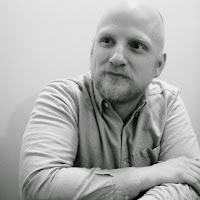 J.P. Lantern lives in the Midwestern US, though his heart and probably some essential parts of his liver and pancreas and whatnot live metaphorically in Texas. He writes speculative science fiction short stories, novellas, and novels which he has deemed "rugged," though he would also be fine with "roughhewn" because that is a terrific and wonderfully apt word.

Full of adventure and discovery, these stories examine complex people in situations fraught with conflict as they search for truth in increasingly violent and complicated worlds.

Buy the book on Amazon.

Rita Wray said…
I enjoyed the excerpt. Sounds like a great read.
11:52 AM

♡♥♬ Carolsue ♡♥♬ said…
I enjoyed the excerpt from the book. It sounds like a winner!
Digicats {at} Sbcglobal {dot} Net
4:10 AM

johnthuku0 said…
I enjoyed reading the excerpt.
1:45 AM