This post is part of a virtual book tour organized by Goddess Fish Promotions. Sandra will be awarding a luggage tag, mini book necklace, and a $15 Starbucks GC to a randomly drawn winner via rafflecopter during the tour. Click on the tour banner to see the other stops on the tour.


The Author's View: Inside - Sandra Hunter
I keep a dream journal on my desktop computer. I started it in 2005 – a few years after I gave birth to my daughter. It seemed that my dreams were becoming more vivid but maybe it was only hormones!

In dream life, the mundane becomes exotic: a whole re-education in observing the ordinary. Dreams are these odd, mysterious, and dangerously beautiful little packages that unravel themselves when you are at your most vulnerable. The dream world has been a fertile source of writing for centuries. For anyone who’s interested in trying this out, and especially for writers, I recommend keeping a keep a notebook by the bed so you can write down your dreams immediately. They’re so evanescent that if you wait until the morning, they’ll most likely have disappeared. Experienced dream loser here!

My dreams can be a sequence of strange events or images, or a single truncated scene. For example, in one dream I was fronting a punk band and screaming “Life is death!” In another brief one, I was watching a television show about two French comedians who sat on the floor and played guitar. They pulled a lot of faces and sang songs. They ended each song by doing somersaults and ending up with their shoes up against the camera.

Often I’ll add details from my dreams into my fiction. A whole story developed from the punk band dream. It’s called “The Stob of Ob” (you can read it here at the Turk’s Head Review).

But the following dream was already developed in short story form. The language is as close to what I remember from the dream. It’s the first dream I’ve had with an actual narrative voice:

She heard him and saw him but only sideways because he would always turn his head or disappear. He didn’t trust her. And she had to write some of his work, to translate what he’d made in music. And she had to write in a different shape of language, something she didn’t know but flowed when she allowed her pen to write. She was working with other musicians but none like him.

As she wrote the words and shapes came before she saw them in her mind. And she wrote them onto paper that was sometimes long and sometimes wide, like manuscript.

He looked at what she’d written, and laughed and said, “That’s it.” And they both laughed but she couldn’t look at him because he’d disappear and she would miss him in the way that the body misses music.

When she walked along a street, he’d arrive behind her and when she looked he’d gone inside somewhere or he’d turned into a metal pipe or a gas gauge. 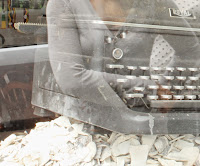 And then she called him in her mind, “Tom” and she saw him reflected in a window as he stood behind her. Someone took a photograph of the reflection. And her image was trapped in the glass.

And she walked along and laughed aloud to think of the music she had written with him. And she heard him laughing, too, and she knew he was thinking the same thing.

And she walked along the wet street full of yellow pipes and gas gauges and she called him. Tom. Kiss me. And he came but his head turned sideways and as she pressed the corner of her mouth to his, he turned into someone else but very slowly so she could still see him, almost. And she said Stay, Tom. His whole body stayed and he let himself hold her and hold her.

After Indian Independence Arjun brings his family to London, but hopes of a better life rapidly dissipate. His wife Sunila spends all day longing for a nice tea service, his son suddenly hates anything Indian, and his daughter, well, that’s a whole other problem. As he struggles to enforce the values he grew up with, his family eagerly embraces the new. But when Arjun’s right leg suddenly fails him, his sense of imbalance is more than external. Diagnosed with muscular dystrophy, he is forced to question his youthful impatience and careless cruelty to his family, until he learns, ultimately, to love them despite — or because of — their flaws. In a series of tender and touching glimpses into the shared life of a married couple, Sandra Hunter creates strikingly sympathetic characters — ones that remind us of our own shortfalls, successes, hypocrisies, and humanity.

Sometimes she goes to stand at the bottom of the garden, pretending to tidy up the compost heap, and allows the forbidden thought to come: divorce.

She can only whisper it. It’s a bad word. Bad people do it. But in the Woman’s Own magazine at the doctor’s office, she read that Elizabeth Taylor had done it. She’d done it so many times that it was just part of her normal routine. Get up, put on face cream, divorce Richard. How daring it sounds, so chic. Sunila practices. Get up, put on Johnson’s Baby Lotion, divorce Arjun. I’ll just divorce him and he can take his disapproving face and jump in the lake.

Sandra Hunter’s fiction has been published in a number of literary magazines and received awards including the 2014 H.E. Francis Fiction Award, 2012 Cobalt Fiction Prize, 2011 Arthur Edelstein Short Fiction Prize and three Pushcart Prize nominations. Her debut novel, Losing Touch, was released in July (OneWorld Publications). She lives in Simi Valley, CA, with her husband and daughter, and is always on the look out for the perfect gluten-free cupcake.

Goddess Fish Promotions said…
Thank you for hosting
4:59 AM

Sandra said…
Thank you Amy. Let me know if you have any questions!
5:48 PM

Cali W. said…
This comment has been removed by the author.
8:11 PM

Anonymous said…
It sounds like she is unsure of herself and uncertain if she should obtain a divorce or just try to live with her husband and make the best of the situiation.
12:49 AM

Sandra said…
Thanks everyone for the comments!
Deanne -- it's true: we don't know ourselves until we're placed in out-of-the-ordinary situations.
And re: your comment about Sunila: yes, she is unsure of herself but never really considers leaving Arjun.

Thanks, Cali. The publishers decided to make the cover very colorful so it would attract attention!

Heidi said…
I like that the characters have VERY real world problems and situations that they are encountering.
10:33 PM

Sandra said…
Thank you, Heidi. It was important to me to try and make these characters relatable even though their culture and location may not be familiar.
7:53 PM

Sandra said…
This comment has been removed by the author.
7:54 PM