This post is part of a virtual book tour organized by Goddess Fish Promotions. Mindy Halleck will be awarding a $100 Amazon GC to a randomly drawn winner via rafflecopter during the tour. Click on the tour banner to see the other stops on the tour!


How Long Does It Take To Write A Novel?
By Mindy Halleck

Aspiring novelist often ask, “How long did it take to write Return To Sender?”

Then I get a look of horror, so I explain. There were a lot of reasons, but two main ones.

One was that I had cancer three times while writing my book. With each time I lost at least one year of recuperation time and the long bouts of NO energy or creative flow interrupted everything. When focused on my own mortality it turns out I’m not one of those authors who can create: some can, and I admire their stamina. I just couldn’t think straight and so lost a lot of time.

The other reason was it took years to research Korea, The Korean War, and The Korean War orphans who our US soldiers raised money to help and risked their own lives in doing so. I then had to write my protagonist, Theo Riley’s journals based on that research. I wrote his letters and journals for three or four years so I would know who he was, what he went through and how deeply he was wounded. It was a long process but one I needed to go through in order to create an authentic Korean War hero.

It takes a lot of energy and focus to write a novel and for many of those TEN YEARS I was focused on loving my family and staying alive. However, what I did create while really sick was one of my other characters who I adore, Solomon. He’s a Nehalem Indian Shaman (a healer) and a wise man who guides Theo out of his darkness. No mystery there; I needed a healer and a guide through my darkness and so unconsciously created one. It helped. Today I’m fine and starting work on my next novel.

1955 ~ Father Theo Riley never wanted to be a priest, nor a killer. The former boxing champion and Korean War veteran gave up more than a career when he went into the Army. He lost the only thing he ever wanted: his love, Andréa Bouvre. Friends thought Theo entered the priesthood to mend his broken heart or atone for the massacred orphans he couldn’t save in Korea.

However, the truth is much darker and more damning, tied to a blood debt and family secret that has haunted Theo since he was a boy. He drinks to forget he ever had a life of his own—waits for death, prays for mercy, and hopes for a miracle. He gets all three when a child goes missing, another shows up on his doorstep, and the love of his life drives back into his world; the seaside hamlet of Manzanita Oregon.

Theo’s dream reunion with Andréa becomes a nightmare when a serial killer who considers himself a holy man targets the town and everyone Theo loves. Drinking days decidedly behind him, Theo and some old warriors set out to send evil back to hell and a few good souls to heaven in RETURN TO SENDER. 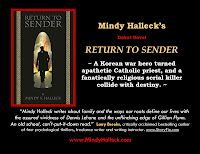 All night I listened for cars, footsteps, noises that didn’t belong. All night, every sound reminded me of Korea’s Karst Caves: sounds, smells, threats hidden in every echo. I tried to recall in which letter I wrote to Andréa about the noisy bats. Was it October ’52, or later?

The children had been terrified of the Daubenton bats that built colonies inside the caves. At night, the scratching sounds and flapping wings was as threatening to them as the sound of footsteps and the CCF running up on us at night was to me. The nun told them the bats were good luck, there to protect us, that they stayed awake at night to keep watch.

The oldest boy, Hai-bin, was the first to call me “Teo.” He rolled his eyes back in his head when the nun said that. In any other world, he’d have been a budding teenager full of angst and attitude, not an undernourished warrior ready to fight, ready to die, not old enough to understand the meaning of either. Not old enough to understand any of Korea’s madness. But then, who was?

As the days, nights, and weeks had gone on, those brave orphans folded the strange noises from the waking Daubenton bats into that place where they carried the heavy, heavy burden of acceptance—they slept through the night with those mysterious guardians taking flight above them. They slept. It became part of their new existence. An existence brittle and rickety as the bamboo bridges that sooner or later would lead us back to a world ablaze outside those caves.

Mindy Halleck is a Pacific Northwest author, blogger and writing instructor. Her short story, The Sound of Rain, which placed in the Writer’s Digest Literary Contest blossomed into her first novel Return to Sender. Halleck blogs at Literary Liaisons and is an active member of the Pacific Northwest writing community. In addition to being a writer, Halleck is a happily married, globe-trotting beachcomber, antiquer, gardener, proud grandma, and three-time cancer survivor. www.MindyHalleck.com

Goddess Fish Promotions said…
Thanks for hosting!
7:05 AM

Lauren said…
Wow! I enjoyed the guest post. I truly hope you are feeling better, and I'm sure the extensive research you put into the book clearly shows. It's obvious when authors actually do RESEARCH for their book as opposed to not, and I would MUCH rather read a more authentic novel.
7:51 AM

Mindy Halleck said…
I'm late to the party this morning - I blame the gorgeous snow and loss of internet.....This post looks lovely, Thanks so much Judy - I appreciate your time and effort. Cheers, Mindy Halleck
12:21 PM

Mindy Halleck said…
Thank you Lauren Seiberling, I so appreciate your feedback. And yes I feel great! And yes, I did research the heck out of each and every character, from Solomon's Native Indian Roots, myths and beliefs, to Theo's Ireland, and Mrs. B's connection to China and lost sea captain.
All based on real history. Thanks again for commenting. Mindy Halleck www.mindyhalleck.com
12:24 PM

Mindy Halleck said…
Thanks, Robert Grieco, I am getting rave reviews about my characters. I hope you check the book out, and if so, let me know what you think. Cheers, Mindy www.mindyhalleck.com
12:27 PM

Rita Wray said…
I enjoyed the excerpt, thank you.
1:54 PM

Anonymous said…
I'm glad it worked out for you!

Mindy Halleck said…
Thanks Brooke Bumgardner, I look forward to hearing what you think about Return To Sender. Please do let me know know via my Goodreads, my facebook Fan page or my web site at www.mindyhalleck.com, what you think. Remember, Reviews on Amazon are golden to authors. Cheers, Mindy
5:27 PM

Karen H said…
Talk about a labor of love, blood, sweat and tears to achieve the end game! This book sounds like a fantastic read and you should be congratulated on the release of your first novel.
12:19 AM

stacey dempsey said…
Thank I enjoyed the excerpt and you have alot more patience than me, I dont think I could wait 10 yrs to write and finish a book
3:51 AM

Mindy Halleck said…
Hi Stacey, thanks for reading. I'm not sure it's patience so much as dogged persistence regardless of consequences; in other words, I just needed to write the story no matter how long it took. And there were some who said let it go. I never did. Cheers, Mindy
11:21 AM

Luanne Brown said…
You rock, Mindy-and so does your book. As a Pacific Northwester myself, you nail the 'sense of place' and the eras you cover. Your opening was terrific. Talk about starting off with a bang! And to find my favorite Lincoln City, Oregon motel--The Ester Lee--in the pages of your book proves just how authentic your writing is. Congratulations on a remarkable accomplishment!
1:10 PM

Unknown said…
This book sounds fantastic. Can't wait to read it.
12:39 AM

Mindy Halleck said…
Thank you Luanne and Tina, the reply seems to be turned off now, but i hope you get this. I so appreciate your comments. Mindy
1:56 PM

♡♥♬ Carolsue ♡♥♬ said…
I liked the excerpt from the book. Sounds like a winner!
Digicats {at} Sbcglobal {dot} Net
6:02 AM

Anonymous said…
I really enjoyed the excerpt.
11:40 AM

Unknown said…
I liked the excerpt!