This post is part of a virtual book tour organized by Goddess Fish Promotions. The grand prize winner, chosen by Rafflecopter, will receive a $50 Amazon GC plus print or digital copy of book 1 or book 2 in the series; 15 runner-ups will win their choice of a digital download of book 1 or book 2. Click on the tour banner to see the other stops on the tour.

The Author's View: Inside/Outside
The view inside my writing space

This is where all the magic happens! Or the madness depending on the project. As you can see, I have a fairly simple set up. My computer is one of those all-in-one deals, so it doesn't take up a lot of space. This is great, as my apartment isn't exactly Buckingham Palace. It’s more akin to a shotgun house but with slightly less elbow room.

You may be wondering about the sticker at the top of the computer. I use it to cover the webcam when it's not in use. That last thing I want is Smiley or some other internet ghost spying on me. I'm looking at you, Google!


The view outside my window

My apartment complex provides a breathtaking view of the parking lot. It had just finished raining when I took this picture, much to my sadness. I can’t say why, but something about the rain pattering against my window sparks my creativity. Thunderstorms have a similar effect. Living in the South, I get plenty of both. Unfortunately, the bad weather often knocks out my electricity, especially when I’m writing a particularly engaging scene. Luckily, my good pal, document recovery, always has my back.

There’s a frat house on the other side of the fence. Its residents often treat me to several hours of booming music, raucous laughter, and the occasional crash of glass bottles. It’s what every writer dreams of…in their nightmares. There’s also the matter of the neighborhood cat whose nightly rounds bring him to my window, where he spends several minutes scratching around. Sometimes I wonder if he plans on becoming the real-life Mr. Fancy Pants. If so, Zeus help me.

When a band of super-powered humans stirs up trouble in New Olympia, Zeus knows just who to call.

Wisecracking private investigator Plato Jones is used to cleaning up the gods' messes. But this might be his most dangerous case yet, placing him deep behind enemy lines, in Tartarus Maximum Security Penitentiary. After infiltrating the enemy's organization, Plato inches closer to the truth. But he learns a hard lesson along the way: to defeat a villain, he might have to become one himself.

Olympus Confidential skillfully weaves humor and Greek mythology into this fast-paced fantasy. Whether new or returning to the Plato Jones series, fans of thrillers, contemporary fantasy, and Greek mythology will have a tough time putting this one down.

Herc and I were meeting up for drinks. Our pal Geno had planned to join us, but got sidelined by a sudden case of worms—a common health problem among satyrs. I decided to make up for his absence by drinking twice as much.

The sacrifices I make in the name of friendship.

No less than a dozen paparazzi loitered near the bar’s entrance, a sign that Herc had already arrived.

As always, Napoleon, the minotaur bouncer, kept the parasites at bay. He had been allowed to keep his job after the change in ownership. I was glad. The place wouldn’t have been the same without him.

As I neared the entrance, a paparazzo began snapping pictures of me.

“Plato, over here!” one of them exclaimed. “Think you and Aphrodite will ever get back together?”

At the mention of the Love Goddess’s name, the other photographers turned their cameras on me. They bombarded me with questions about her and me.

“Are you still in love with her?”

“Is she as kinky as they say?”

“Is it true you two have a secret love child?”

I ignored them and stepped up to the door. Napoleon nodded.

Napoleon returned the minotaur equivalent of a grin. It looked more like a grimace. He opened the door for me. None of the so-called journalists attempted to follow me inside. They were a lot of things—pushy, obnoxious, disrespectful—but stupid was not one of them.

The bar was filled to capacity—a fifty-fifty mix of humans and nonhumans. “I’ll See You in My Dreams” by Giant poured from unseen speakers, barely rising above the rich hum of many conversations going on at once.

All the usual suspects were present. Most greeted me with waves or hellos. One of the longtime regulars, a steelworker named Mitch, gave me a hearty slap on the back and called me an asshole.

Yep. We were one big, happy bar family.

Hercules, the half-human son of Zeus, was having a beer at the bar. One of the most powerful beings in existence, he had performed countless acts of heroism over a life that spanned several millennia. His ferocity, honor, and cunning were the stuff of legend. Most people regarded him as the world’s first superhero.

To me, he was just Herc, my best friend and a cheapskate extraordinaire. 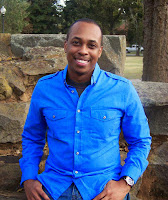 A fan of thrillers, fantasy, and science fiction, Robert B. Warren has been writing stories ever since he could hold a pencil. In 2009, he received a Bachelor of Arts degree in English and creative writing from the University of Alabama. He currently lives in the south.


Buy the book at Amazon

Goddess Fish Promotions said…
Thanks for hosting!
6:34 AM

MomJane said…
This has to be one of my very favorite excerpts. I really loved it.
10:16 AM

Rita Wray said…
Thank you for the peek inside your writing space.
12:14 PM

Anonymous said…
It is a great excerpt!

Anonymous said…
Thanks everyone! I'm happy to have made it this far with my writing. It feels like a dream. I'll do my best to keep you all entertained.
1:01 AM

♡♥♬ Carolsue ♡♥♬ said…
I like the bio on the author. I always find them interesting.
Digicats {at} Sbcglobal {dot} Net
4:05 AM