This post is part of a virtual book tour organized by Goddess Fish Promotions. Nhys will be awarding a $10 Amazon GC to a randomly drawn winner via rafflecopter during the tour. Click on the tour banner to see the other stops on the tour.

Crippled by shyness, shunned for being not-right-in-the-head, gifted artist and Roman noblewoman, Marcia Mica, has only two people in the world who truly love her – her teacher, Daedalus, and her childhood friend, Asterion, both slaves in her father’s household. But when forbidden love blooms between the unlikely friends, only disaster can come of it. That disaster leaves Marcia horribly scarred and Asterion sold into the arena as a gladiator.

Years later, Daedalus brings a broken Marcia to Britannia, and Sabrina, the healer who saved his life when he was a boy, works miracles on the scarred girl. However, not all scars are physical and those Sabrina has no ability to heal.

When Sabrina and Marcia are kidnapped by a Celtic leader bent on revenge, Asterion must depend on the dreams of a Celtic Seer to find the love of his life and help foil a revolt that threatens the fragile peace in Roman Britannia. But even if he and his friends succeed, can scars that are more than just physical ever really be healed and can those whose lives are owned by others ever truly be free to follow their hearts?

That was when he saw it. That was when he knew this wasn’t a dream. Or if it was it was, it was his worst nightmare: The whole right side of her face and body were covered by red, ugly burn-scars.

He gasped and dropped to his knees, his legs unable to hold him up a moment longer.

Daedalus came to his side and rested a hand on his shoulder. ‘It’s a bit of a shock the first time you see it. But after a while you don’t notice it.’

He stared up at the man who had been like a father to him; the man he blamed for being right about Marcie and him. How could he say this was a bit of a shock?

But before he had a chance to snap out a retort, Marcie’s body began jerking as the healing commenced. Though he couldn’t see anything happening, he could sense it. And so it seemed could Daedalus.

‘It’s her… By all the gods, it’s her,’ Daedalus whispered in awe as he watched Sabrina’s face, transformed by the Urge that had taken control of her.

He didn’t know what Daedalus meant. He didn’t care what he meant. This man had had his Marcie all this time. She’d been alive, all this time, and no one had told him. They’d let him leave the Estate thinking she was dead. And he’d died that day because of it.

‘You bastard. Why didn’t you tell me?’ he sobbed out, his voice breaking on the last word.

‘Tell you?’ Daedalus looked at him as if he’d grown a second head. 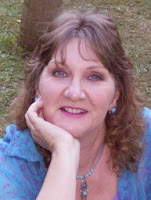 After a lifetime of teaching others to appreciate the written word, Aussie author Nhys Glover finally decided to make the most of the Indie Book Revolution to get her own written word out to the world. Now, with almost 100,000 of her ebooks downloaded internationally and a winner of 2013 SFR Galaxy Award for 'The Titan Drowns', Nhys finds her words, too, are being appreciated.

At home in the beautiful Yorkshire Dales of England, Nhys these days spends most of her time "living the dream" by looking out over the moors as she writes the kind of novels she loves to read: The ones that are a little bit steamy, a little bit different and wholly romantic.

Goddess Fish Promotions said…
Thank you for hosting
4:39 AM