This post is part of a virtual book tour organized by Goddess Fish Promotions. Stacy will award a $50 Barnes and Noble GC to one winner, and a signed ARC of An Intimate Murder (US only) to two randomly drawn winners via rafflecopter. Click on the tour banner to see the other stops on the tour.


The View From My Writing Space

His vision is so narrow seeing only what’s there. He looked but he didn’t see. When I walk into my office I see without looking, and I see so much more than he did. 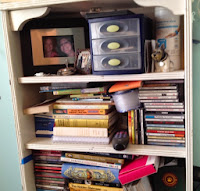 My well-trained writer’s eye finds comfort in seeing things that make me happy. Where they see clutter I see pieces lovingly accumulated over a lifetime. From pictures of my family, to souvenirs of my travels, to inspirational saying, my office is a visual cacophony. There is no place for your eyes to rest in my writing space, except on a neat clean page. Maybe that’s why so many writer’s rooms are cluttered. It’s a way of forcing yourself to the page. 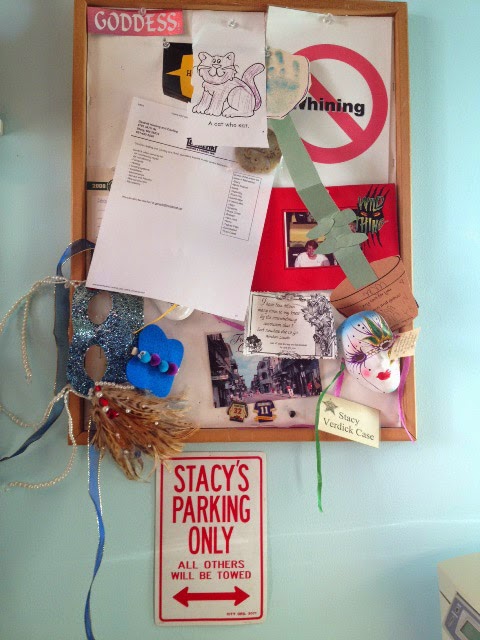 Of course, it could be that our minds are cluttered and our offices are the one place that the chaos is allowed to spill out. I don’t think so though. I’ve attempted to sterilize my writing space and make it clutter free and sitting there at the bare desk made me twitchy. I was unable to focus. My mind wandered around and kept finding reasons to be outside of my office. Eventually all the visual noise crept back into the room and it has remained ever since.

Far from being a distraction, the things scattered about center me, and ground me to who I am or who I want to be. It’s like building a cocoon or a nest. I wall myself into a comfortable space for me.

Everyone’s writing space should be as personal to them as mine is to me. If you need sterile and quiet then that’s what you should have, but I will take loud and chaotic every day of the week.

When Jonathan and Susan Luther are murdered in their home, St. Paul homicide detective Catherine O'Brien and her partner Louise discover this isn't the first time the Luther family has been visited by tragedy. Is it a case of bad family luck or is there something more?

I locked eyes with her and wished, not for the first time in my life, that I had telekinetic abilities. If I had, I could mentally disembowel Jane Katts. That’s probably why God never blessed me with that particular gift.

“Hello Detective.” Jane Katts’ tone was overly pleasant. She must have trumped me in some way and now she’s was just waiting for me to concede the trick.

“Close the door behind you, O’Brien.” The chief rocked back in his chair and smiled.

There was nothing in his smile except pleasantry, which made me more nervous than the one Jane Katts had given me. A broad smile was so alien on the Chief’s face that I was certain that Jane Katts had managed to pull a switcheroo and replace the chief with a pod person of her own design; one who is not hard-edged and sand-papery as I have come to expect but instead soft, with as much grit as a nail file.

“I’m afraid there’s not enough chairs so one of you will have to stand.” The smiley version of our chief of police said.

I braced my feet a shoulder width apart and crossed my arms over my chest, I preferred to stand for whatever nasty surprise Jane Katts had in store for me.

Louise sat and introduced herself to Jane. They exchanged a handshake.

“Ms. Katts is the reporter who asked for the exclusive interview.”

He glossed over the detail about her being the reporter who had engaged in a calculated smear campaign against the department.

“She would like to change the angle of her story to get more of an inside view.” The chief’s eyes cut to my face and I saw a hint of the real chief behind whatever hoodoo Jane Katts had performed on him. 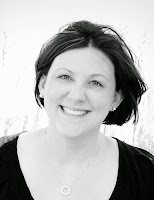 Stacy Verdick Case was born in Willmar, Minnesota. After a brief stint as a military brat, where she lived in Fort Sill Oklahoma and Fort Campbell, Kentucky, her family moved back to Minnesota.

Stacy has written all her life earning a High School Writer Award and a Daphne Du Mauier Award for excellence in Mainstream Mystery/Suspense.

Stacy currently lives in a suburb of St. Paul with her husband of twenty-years, her five-year-old daughter, and their two cats.

An Intimate Murder is the third book in the Catherine O’Brien series.

Goddess Fish Promotions said…
Thank you for hosting
5:39 AM

Unknown said…
Thank you so much for letting me be a part of My World of Dreams today. I had wicked anxiety about showing my office space to anyone but life begins at the edge of you comfort zone so here it is on the page! I appreciate you letting me visit today.
9:01 AM

Rita Wray said…
Thank you for the peek into your writing space.
11:10 AM

Unknown said…
You are so welcome, Rita! Thank you for taking a peek!
1:50 PM

Unknown said…
My friends say they can tell Im in writing mode because my place will start to look like Sanford & Son- I need to have everything out where I can see it. I love that you shared that your space is also considered by others to be chaotic but perfect for you.
5:25 PM

Unknown said…
Hi M. Jernigan! Yes! That is exactly right! Hopefully me sharing my chaos make you feel centered about yours! Thank you for helping me feel less crazy about mine.
6:26 PM

MomJane said…
I really enjoyed your comments and this story sounds fascinating.
6:30 PM

Unknown said…
Thank you MomJane! I love being able to chat with you guys!
9:13 PM