Virtual Book Tour: The Gods of Garran by Meredith Skye

This post is part of a virtual book tour organized by Goddess Fish Promotions. The author is giving away a $25 Amazon gift card. Click on the tour banner to see the other stops on the tour.

Once the Borrai, the Gods of Garran, walked among the people, taming the wind and the fiery mountains. Then invaders came from the sky and killed the gods--destroying all who opposed them. A hundred years have passed since the Invaders came from the sky--an advanced alien race known as the Chanden. Now, having suffered many grievances at the hand of the aliens, the tribesmen rise up to find the god-stones and revive the ancient powers of the Borrai--and reclaim their world.

When the Chanden learn of this, they send a spy to infiltrate the Garrans--a young woman named Asta, who has her own reasons for hating the Garrans. She begins to realize that they are dealing with a real power and not a superstition when they get close to finding the god-stones. Can the Chanden be in the wrong?

Asta stood there on the edge of the cliff.

The sea churned below the stormy sky. Asta could feel its anger and understood it. She felt the strength of spirit of the sea, and it spoke to her in words she couldn't make out. Images came to her mind: fire, brimstone, craggy rocks, a tall mountain.

Beneath the water lay an ancient city. Whisperings.

If she could get closer ….

Something jolted her out of the dream. Asta struggled awake to find herself laying on the hard rock. Moorhen lay on top of her. She cried out and tried to get up but the native Garran held her down, restraining her wrists. “Moorhen!” she shrieked, struggling against his hold.

She'd kill him! If only she could reach her knife. Again she tried to break his grip, but he held her fast. What was he thinking!

"Get off!" she yelled. At this, he released her and got up, freeing her.

Quickly she sat up, embarrassed at this impropriety. Then as her senses returned, she realized she really was on the cliff near the pylon. All the others stood around her.

"You should not have done that!" said the old woman, Sindke, angry.

"She would have thrown herself off the cliff!" argued Moorhen. Asta struggled to her feet, still trying to grasp the situation.

"I think not," said Sindke. "Now the dream is broken."

Asta stared around at them. She had done it again--the sleepwalking and they had let her. Had followed her. "What--?" she asked.

They had walked all night to the sea, following her. 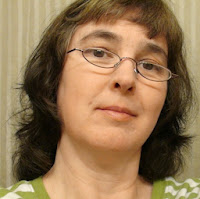 Meredith Skye began writing fiction in elementary school and always wanted to be a novelist. She was fascinated by tales of the fantastic and bizarre.
,br> She loves to travel. She has a fascination with the Middle Ages and loves swords, medieval costumes, castles and ancient lifestyles. She enjoys Celtic art and music.

She's a vivid dreamer and many of her dreams come back to life in her novels.

Meredith Skye has a B.A. from the University of Utah in Film Studies.

Buy The Gods of Garran at Amazon.

Goddess Fish Promotions said…
Thank you for hosting
7:39 AM

Mary Preston said…
I enjoyed the excerpt.
4:30 AM