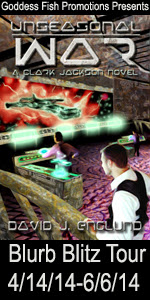 David Englund, author of Unseasonal War, is giving one randomly chosen commenter at every stop a digital copy of the book. Leave a comment or ask the author a question to be entered. Click on the tour banner to see the other stops on the tour.

Clark Jackson’s travels, for the first time, put him in touch with an intriguing species remarkably human-like. He becomes instantly fascinated with the Fronents and envious of their advanced technology. Striving to befriend them and learn more, his uncontrolled enthusiasm forsakes the use of appropriate caution and suspicion. Could their cold reception be a byproduct of their war with a vile species in this corner of the universe, or something else?

The magnificent splendor of an unexplored galaxy, new species to encounter and the adrenalin rush of space battle feed Clark’s awestruck hunger for exploration and adventure. Unfortunately, the more he learns the more he questions; including the wisdom of his entangled involvement in their war.

Meanwhile, back home in Des Moines, Iowa, Clark attempts to maintain an inconspicuous lifestyle to avoid attracting the attention of a certain relentless federal agency. His girlfriend’s own secret, however, could unravel it all.

**Even though the book is the second book in the series, it IS standalone.

Clark studied the face before him. The old creature carried a soft, wise and caring tone during the discussion. This alien was easy to admire, however, it was difficult to get beyond the ruthless features. The enormous bulk, massive display of teeth, scaly skin and intense eyes gave Clark shivers. It would ease the conversation to talk with eyes closed but probably create the opposite affect desired for diplomacy.

Clark forced himself back to the discussion. “Is this why you live in the caves?”

The pair of alligator eyes saddened. “We did not always live in the caves. Many vrems ago we lived out on the plains. We farmed many fields and grew many crops. We had villages to congregate in but most of our people lived in the vast openness of the farms. There were many more of our people back then too. Then came the aliens. They destroyed our farms and stole a great many of our people. We have since discovered that they use our people to work as slaves on their world.”

“Did you already know these aliens when they attacked?”

“At that time we had never had any contact with anyone from the stars. We know them well now, however.”

“Have you met other aliens since then?”

“Let us stay on the topic of our three races, shall we? Do your people fight any wars with other races? How do these conflicts begin for you?”

“Our world has not gotten to the point yet in which we can travel to other worlds, so we have not met any alien races that I am aware of.” 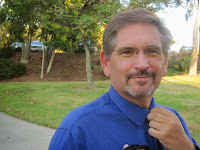 David Englund is a storyteller (science fiction author) and teaches economics at North Dakota State University. His first two titles, Upsetting the Tides and UNSEASONAL WAR are available on Amazon. Camouflaged Encounters is due out in late 2014 and the fourth and fifth books are in progress.

David said…
Thank you so much for promoting my latest novel! This is a very attractive post. I hope your readers have fun today.
8:11 AM