Virtual Book Tour: The Legend of Eve by Toni Edge 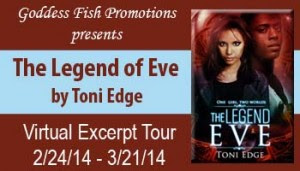 As Adam tries to convince Eve he wants her and not just her DNA, Eve discovers a hidden world of interstellar traders, human "genetic cows," and teen abductions by a government that will do anything to control the Teluosians on Earth.

When Eve's mom is kidnapped, loyalties are tested. Is Eve Adam's true love or his next "genetic cow?"

Lily dropped into her seat and slammed the sweets on the table. "Eve and I are friends, Adam. You said she was safe." She plucked an ice cube out of her tea and tossed it at him. "I think knowing more people is good for me. Being with Eve has helped me understand how I can use my talents to help others."

"Lily has always been able to read people. So, is this what you do, Angel, help others in your spare time?" he asked.

"I'm sorry—are you talking to me, oh mighty one?" My teeth clenched. He sat there as if he could wait all day long. I could hear Lily's breathing like a giant bellows. "Yes, I like to help others if I can." I gave him a pointed look and continued. "Some people can't be helped no matter what."

He smiled a devilish smile that had my body preparing for the verbal blow. "Oh, Angel, you can help me anytime you want. Just let me know when and where."

"I think I'm going to gag," Lily said as she swallowed the watery remains of the ice cubes of her long gone drink.

He couldn't know! Could he? That smile said he not only knew how hot I thought he was, he was more than willing to participate in filling in the fuzzy parts of my ridiculous, unfounded romantic daydreams. 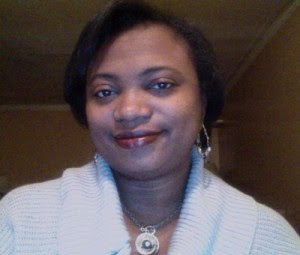 Toni Edge is a former juvenile delinquent and honorary member of the truancy club. Now, she likes to teach teens who remind her of herself. She also likes to read everything, a habit she picked up during her truancy days. For all the rest of her free time she likes to write young adult paranormal/science fiction stories that would have made her teen years so much clearer, if the stories had been true.

Buy the book at Barnes and Noble, Kobo, Kindle.

Goddess Fish Promotions said…
Thanks for hosting!
7:13 AM