The Writer's View: The Unremarkable Squire by Nick Hayden 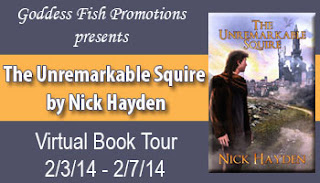 This post is part of a virtual book tour organized by Goddess Fish Promotions. Nick will be awarding a Winner’s choice of a $10 Starbucks card or a 4-piece box of Moonstruck truffles to a randomly drawn commenter during the tour. In addition, anyone who is interested can go to the Barking Rain Press website and get a free 4-chapter sample of the book, plus a coupon for 35% off the price of the print or ebook version of the book. Click on the tour banner to see the other stops on the tour.

My writing space? You mean that sticky note I scrawl quick half-formed ideas on? Or the notebook stuffed in the bookshelf that houses rough drafts of flash fiction? Or the Google Doc that waits in the cloud for me to find it wherever I might be?

Oh, you mean the place my computer sits. That corner of the living room where I pound out sentences that hopefully make sense and copy nearly illegible scribbles from my notebook. It’s just a computer on a table stuffed in a crevice with questionable lighting and just enough space for any extra materials I might need. And speakers, for the music. I definitely need music.

And my seat? A tutung (spelling approximate), also known as a wooden chair. My wife’s grandpa helped translate the New Testament for the Achuar Indians in Peru, and the chair is an artifact from those people. It’s actually quite comfy for being bare wood, though the lack of a backrest has probably contributed to a slow hunching of the spine.

It’s not a particularly special space, but it’s my space, and it has a keyboard. That’s enough.

Oh, and outside is the high school. So sometimes there are kids laughing loudly and cars blaring music. I miss the 3 o’clock rush, since I write in the evening, but just wait until Friday night after the dance! And the marching band serenades us late into the night for nine months of the year.

But you know what? None of this really bothers me. I have two small kids, a 4-year-old and a 2-year-old. I’ve learned to write in the nooks and crannies of life. Sure, a spacious office and spare time to twirl my pencil and ponder would be nice. But the writing happens with pen to paper and fingers to keys, and that can happen anywhere.

My novel The Unremarkable Squire was written on park benches and sofas, in basements and on beds. In long spurts and in long absences, in revisions and redactions. I suppose it’s a bit like eating green eggs and ham, this writing thing. You learn to do it in a house or with a mouse, on a train or in the rain.

You hope that the end result is a bit more inspiring than the workaday surroundings that helped give it birth. And more tasty than that wretched green eggs and ham Sam-I-Am keeps trying to pawn off.

About the Author: Nick Hayden is the author of the fantasy novels Trouble on the Horizon and The Remnant of Dreams. He has penned a number of short story collections, including Dreams & Visions, and the novella "The Isle of Gold". Hayden co-hosts a story-telling podcast, Derailed Trains of Thought, about once a month and also helps run the Children of the Wells web serial. Nick describes himself as a mild-mannered bookkeeper by day, a mild-mannered (albeit tortured) writer by night, a writing teacher three times a week, a youth leader on weekends, and a podcaster every month or so. He has a wife and two kids, who do a fine job of putting up with him.

What people are saying:

“A remarkable tour de force set in a medieval world where magic is as common as muck, misunderstandings are ten a penny, and everyone but the hero has a remarkably good opinion of themselves. Nick Hayden mixes humor with fantasy to delight the inner eye and ear of the reader.”
— Adele Abbot, author, Postponing Armageddon

“Dazzling damsels in distress, a magical suit of armor, mayhem and danger at every turn, a host of unique characters and plenty of laughs make this novel worth reading. Mr. Hayden tells a worthy tale well!”
—Phillip Tomasso, author, Sounds of Silence

A squire’s oath is to be of service… but to whom?

In the kingdom of Basileon, an unremarkable and emotionally detached young man named Obed Kainos is about to stumble into adventure—quite against his will. When the knights of the realm gather in a quest to search for the lost Armor of Arkelon, Obed is chosen at random to replace the recently deceased squire of Sir Lance Valentino. While trying to perform his menial tasks faithfully, the young squire becomes entangled in the plots of mages, thieves, and kings.

And that’s just his first week on the job.

Unfortunately for Obed, his indifference cannot save him from his new oath. For despite his enigmatic personality (or perhaps because of it), he manages to attract a band of misfits to his cause— the ugly, the arrogant, the clumsy, and the cowardly—putting the legendary armor within the grasp of one who never wanted anything at all.

Nick Hayden said…
Thanks for letting me drop by and share the "wonders" of my writing cubicle. It was fun.
8:17 AM

Barking Rain said…
Don't forget that you can read the first four chapters of THE UNREMARKABLE SQUIRE for free at the Barking Rain Press website.
11:15 AM

Nick Hayden said…
If you could see outside my writing space right now, you'd see lots and lots of snow. :-)
8:12 AM