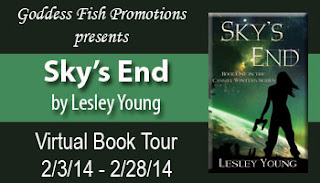 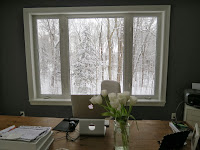 Feb 18th, Caledon country, Ontario, Canada, outside my office window. Nestled deep with snow laden white pine trees, I feel peaceful. Glancing outside, I realize how close to nature I am, and stresses slip away, even as I work furiously to magazine deadlines. My day-job worries are trivial compared to the rabbits and fox working much, much harder to survive.

As pressures lift, my imagination awakens. All at once my mind travels to my current protagonist Cassiel Winters, and the state I left her in at the end of Sky’s End, Book One in the Cassiel Winters Series—incomplete. She’s only just begun to discover what she’s really made of.

The heavy branches bear their load silent, permanent and strong. I long to go back to the fast-paced, dangerous world I have created — a world within this world. But if I can’t just yet, because of other responsibilities, these stoic trees temper my impatience.

Lesley Young is an award-winning magazine journalist. Sky’s End: Book One in the Cassiel Winters Series (Soul Mate Publishing) is her debut novel.

Sky’s End is available on Amazon.

MomJane said…
So this is going to be a series. I am really glad, as it sounds like a good book.
9:52 AM

Unknown said…
Yes it is a series! I am working on Book #2 now. And for the record, it is in fact snowing again outside my office windows.
9:56 AM

ilookfamous said…
Beautifully worded personal blurb. The view is awesome (although I'd hate to have to venture out into all that snow)
Thanks for sharing
8:11 AM