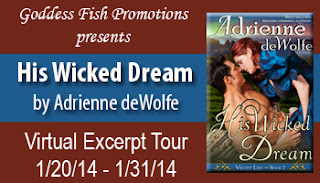 Haunted by scandal, Eden Mallory is determined to start over in a small Kentucky town. But she won't soon forget the sexy, rugged doctor who rescued her from an outlaw, then rode off into the storm.

After losing his kid-brother to consumption, Dr. Michael Jones is obsessed with saving lives. He has no room for love or a wife. But the nights are lonely, and Eden haunts his dreams.

When Eden becomes his backdoor neighbor, she turns his world upside-down with her unconventional healing skills and sweet temptations. Then outlaws return, forcing Michael to confront his past if he is to save the most precious life of all.

As the Independence Day jamboree approached, Eden did her best to reconcile her fantasy Michael with the Michael who was her neighbor. She told herself she was older now, wiser. She shouldn't have to keep herself company in the wee hours before dawn with dreams of a heroic long-rider and his toe-curling kisses.

Michael was a man. A hard-working, intensely passionate man. And while she admired the way he championed orphans and young women in peril, she was angered by his arrogance and outraged by his callousness. She'd cried for two whole nights after he'd flung that, "It's better this way" barb at her defenseless heart.

She tried to tell herself he was right, that it was better for him to avoid her, building Aunt Claudia's shelves behind the closed doors of his tool shed, or riding to the animal orphanage during peak merchant's hours when Eden was needed at the store. After all, Michael's wisecrack that day at the animal orphanage proved he didn't approve of her healing craft any more than Papa had approved of Talking Raven's.

Eden wanted desperately to believe that her success at curing Collie's dysentery over the last week had been no accident; to face Michael's disapproval, even if unspoken, would have been crushing.

Sometimes, she wondered if she approached Michael meekly, confessing that she'd been the gawky seventeen-year-old who'd bathed his wounds and comforted him that night in Whiskey Bend, that he might see some medical potential in her. At other times, she'd recall her shame over the medicine show scandal, and she'd be cured of her foolish notion.

She just wished there was a cure for her youthful fantasies about him. Now that she knew Michael had been the magnificent, blue-eyed hero who'd saved her life in Whiskey Bend, the dream specters returned: visions of a mighty, virile champion, seen through a woman's desire. He would come to her on a thunderous night, his hair whipping rakishly on the wind, his shadow-cloaked frame as awesome as a mountain in the electrical sizzle of storm.

She would glimpse his smile: arrogant, seductive, daring her to surrender to him, her secret fantasy. Her knees would quake before his primal masculinity; his arms, like oaken boughs, would root her to the earth.

He would taste of rain and radiate fire; her senses would combust as they reveled in her danger. She'd hear the crashing of her heart; she'd mark his low, feral growl as his lips devoured hers. Then he'd lay her down beneath a flaming arc of heaven, and the night would shatter with her innocence, an explosion of ecstasy, light, and sound.

The dreams were almost unbearable, considering that the real kiss she'd shared with Michael apparently meant as little to him as... well, the offer of her friendship.

Adrienne deWolfe is a #1 best-selling author and the recipient of 48 writing awards, including the Best Historical Romance of the Year for Texas Wildcat (Book 3, Wild Texas Nights) and Doubleday’s Book of the Month Selection for His Wicked Dream (Book 2, Velvet Lies.) Adrienne is excited to announce that she will be donating a portion of her royalties from the Velvet Lies Series to urban reforestation efforts.

Fascinated by all things mystical, Adrienne writes a weekly blog about dragons, magic, and the paranormal at http://MagicMayhemBlog.com to help her research her upcoming paranormal romance series. She also writes a weekly blog featuring tips about the business of writing at http://WritingNovelsThatSell.com. She enjoys mentoring aspiring authors and offers professional story critiques with her book coaching services.

Goddess Fish Promotions said…
Thanks for hosting!
8:51 AM

Adrienne deWolfe said…
Hi, Judy! Thank you so much for hosting Eden and Michael (and me!) on your fabulous website! I'm so delighted to meet you and your readers, and I look forward to a cozy day of chats! Hugs!
9:07 AM

ilookfamous said…
This looks like a lovely series! Thanks for sharing
4:10 AM

So glad you liked Eden's fantasy! I figured she deserved one of her own, since Michael has a fantasy about Eden (which is why the book is titled, HIS WICKED DREAM.) Looking forward to seeing you next week on the tour, too!
8:48 AM