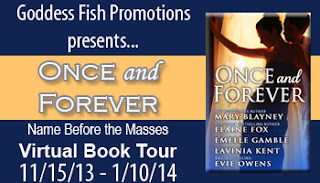 This post is part of a virtual book tour organized by Goddess Fish Promotions. The authors will award a digital copy of the book to five randomly drawn commenters and one grand prize of a $50 Amazon GC will be awarded to a randomly drawn commenter. Click on the tour banner to see the other stops on the tour. Evie Owens, author of "The Psychic Detective," one of the stories in Once and Forever- An Anthology, has stopped by to talk with us today.

Why did you start writing?

I started writing in the 4th grade, when I fell in love with books. And I don't always love writing, but I will always love reading.

Did you ever think it would pay the bills? Or do you hope that one day it will?

I don't know very many writers who support themselves solely with their writing, but I will always live in hope!

Who is your favorite author? Why?

This is such a hard question to answer! Almost impossible, but if I have to choose just one I'll say Laura Kinsale.

Have you ever received a rejection letter? If so, how did you recover?

I've received many rejection letters. Some hurt more than others. None, so far, have proved fatal.

Do your books simply come to you, or do you struggle for each chapter?

The initial ideas for my stories simply come to me. Everything after that is a struggle. Well, not everything. If that were true I wouldn't have finished more than one. So yes, there are some scenes, some characters, some ideas, that seem to come out of nowhere as a gift. In fact, there are just enough of those gift-like scenes/characters/ideas to keep me writing through all the struggling parts.

What is one genre or sub-genre you wish you could try writing in?

I have a great love for science fiction. I love to lose myself in those worlds, but I've never been able to create a world like that for my own stories.

Who is your favorite male character that you’ve written?

So far, my favorite male character to write has been Henry Campbell, the hero of my upcoming YA book, Witch Boy. Because he's struggling with so much and trying so hard.

Who is your favorite male character written by someone else? You know the one? The one that makes you wish he was your character?

Sheridan Drake from Seize the Fire by Laura Kinsale. There's just something about that accidental hero that grabbed hold of my heart and has never let go.

Who is your favorite female character that you’ve written?

Erin Healy, in my novella "The Psychic Detective." Because, like me, she wants to believe. :-)

Who is your favorite female character written by someone else? You know the one? The one that makes you wish she was your character?

Sophie Dempsey, from Welcome to Temptation by Jennifer Crusie. Because she's a little bent but she's got a good heart and last but not least, she gets Phin Tucker!

Can you share any details about something you have in progress or releasing soon?

Anything else you’d like to add that I didn’t cover? Evie Owens is a fabulous and inventive and way too self-deprecating talent. She is sweet and mysterious and people fall in love when they meet her. She is a star talent with two glorious daughters and a granddaughter that is currently interested in her small intestine. Granddaughter is also a beauty, an old soul and a complete hoot. And least you think Evie Owens is arrogant for answering this question like this, please note that this answer was not written by Evie Owens, but by Emelle Gamble, who speaks for the rest of the anthology authors in saying this is all 100% True. Once you’ve tried Evie Owens, you will want more. 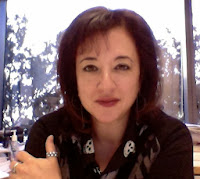 Evie Owens was born in Japan, but grew up on a dairy farm in Upper Michigan. She's waited tables and tended bar, which makes her a very good tipper, but writing is her passion. She's thrilled to be included in this anthology with some of her favorite authors.

These days, Evie lives in Maryland while her two fabulous daughters and one glorious granddaughter live too far away. Leaving her no alternative but to turn to a life of crazy cat ladyness (except for the "cat" and the "ladyness" parts).

From five compelling authors, five original novellas which will make you laugh and cry and believe in a love that once found will last forever. Meet a duke, a psychic, a bodyguard, and a professor, and one "guardian fairy" in absorbing stories ranging from regency and contemporary romance to paranormal and women's fiction.

Psychic Martin Sterling doesn't trust cops--and the feeling is mutual. Detective Erin Healy needs more than a ghost story to save her job and reputation. Her partner is dead, a million dollars in drugs and money is missing, and all the evidence points to her.

Can a sexy psychic and a by the book cop, trapped between the living and the dead, unearth the truth? Or will a cold-blooded killer get away with it all...

Evie Owens said…
Hi Judy, thank you so much for hosting this stop on the blog tour!

And I just now saw Emelle's lavish addition to the post. Eek!

Unknown said…
Not lavish at all, Evie Owens. Heartfelt! Everyone, The Psychic Detective rocks. Worth the price of the whole anthology to meet this great new writer.
12:18 PM

Evie Owens said…
Hi Rita, Thanks so much for stopping by. Best of luck in the contest!!

Melinda Campbell said…
Sounds like a wonderful collection of stories! Thank you so much for sharing with us. Happy New Year! =D

Evie Owens said…
Hi Melinda! Thanks for stopping by. :-)

If you try the collection, let us know what you think. And Happy Happy New Year to you, too!

Elaine Fox said…
I can absolutely vouch for Emelle's comments on Evie - and knew immediately who was writing when I read them! LOL (There's that 'voice' thing, you know. :) )

And, having read Witch Boy, I cannot WAIT to read it again in print. All you people who haven't yet read Evie Owens, you are in for a TREAT!! Srsly.