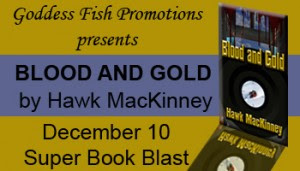 This post is part of a virtual book tour organized by Goddess Fish Promotions. Hawk will be awarding a $20 Amazon GC to a randomly drawn commenter during the tour. Click on the tour banners to see the other stops on the tour.

Blood and Gold, the third book in The Craige Ingram Mystery Series, once again tests the instincts and skills of retired Navy SEAL/part-time private investigator Craige Ingram. Lust, greed, body parts and unrestrained wild sex parties are what await Craige Ingram when he leaves the comforts of his South Carolina home to visit his former SEAL buddy, Detective Spinner Krespinak. Set in the Colorado underbelly of a sordid sable and faux glitz ski mecca, Detective Spinner Krespinak suspects drugs have made their way to the snowy playground that is Aspen. An Olympic ski hopeful is brutally murdered, Spinner vanishes, and Craige Ingram is shot as events spin out of control with a Catch-22 no one anticipates.

The drive up the narrow mountain rutted road was a risky, hands-on-the-wheel icy slid-and-skid. With a grim set to his jaws, Spinner didn’t say a word the whole way. They parked among the jumble of squad cars. Craige avoided the taped-off areas while Spinner huddled with Loopy. Silently they paced-off and studied the layout of each room of the mansion…each room except the one where death waited to greet Spinner. No one except Craige and Loopy knew how Spinner wasn't as detached as he appeared. Spinner traced and retraced his steps. Seeing beyond Spinner’s detached veneer of the professional, Craige could read the surly stir of emotions Spinner was struggling to control.

Finally…there was nothing left except to face the grizzly business of felony homicide and the dead. Spinner went back to where Loopy was busy. As though wanting to avoid seeing what waited in that room, he said, “Any ideas about the time of death?”

Loopy said, “Only a rough approximation at this point. I'd approximate somewhere between eight in the morning and two or three in the afternoon. We haven’t moved the bodies yet, but from what indications of livor mortis I could see, I’m leaning toward it being earlier. Central heat was off…fireplace ashes are still warm. Once we determine algor mortis changes in the body temps, I’ll be able to narrow that some. We've already picked up thirty to forty different sets of prints. Could easily be twice that before we finish. Most so smudged they're no good. The rancher who lives at the valley turnoff said cars were going back and forth all night. How it wasn't the first time they had all-night mountaintop blowouts up there. We bagged used condoms from all over this place—bedrooms, baths, all over the house. We’ll compare DNA with that of the victims. See if we get any matches that narrow down any persons of interest. Looks to be marijuana and freebase by the fireplace and in the breakfast room. And what is likely Mexican black heroin on the carpet in the den. Lord only knows what else we'll turn up. I’ll be surprised if we don’t find Silk or S-K. There's at least a case of empty aerosol cans, probably for heavy-duty huffing. We'll see what the lab tells us…hopefully that’ll fill in more details.”

Spinner said, “Before Frannie left for Denver last night, Ski came by and borrowed my wheels to get here. Brought them back about noon. Christy and the two men had to be alive at the time Ski left. Depending on road conditions, it takes about an hour to get from here back into town. The low last night was below zero, but there was no heavy weather—no wind.” His eyes flashed hurt and anger, a silent reckoning stirring somewhere deep and hidden. “Ski would party 'till the last minute.” Spinner hesitated. “Least, I’d like to think it was that. I wouldn’t like thinking he'd use me as an alibi.” The thought of the possibility was a heart-pain that sliced deep into his soul. “Give me a few minutes before you zip them up.”

Loopy nodded. “No hurry. Take what time you need.”

A very still Spinner turned a masque-face back to the bed…emotions churning his features. A lump knotted his throat. Looking down at Christy’s lifeless body, the bullet hole a vulgar insult to a death mask of frozen beauty…it seemed somehow otherworldly. “…never could trust your flighty-canary way of life.” The niche occupied by carefree fun-loving Christy seemed stark and empty. 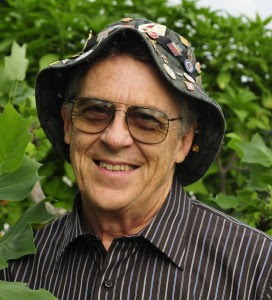 "Without question, Hawk is one of the most gifted and imaginative writers I have had the pleasure to represent. His reading fans have something special to look forward to in the Craige Ingram Mystery Series. Intrigue, murder, deception and conspiracy--these are the things that take Hawk's main character, Navy ex-SEAL/part-time private investigator Craige Ingram, from his South Carolina ancestral home of Moccasin Hollow to the dirty backrooms of the nation's capital and across Europe and the Middle East."
Barbara Casey, President
Barbara Casey Literary Agency

www.HawkMacKinney.net
Buy the book at Amazon or Barnes and Noble.

Goddess Fish Promotions said…
Thanks for hosting!
7:43 AM

Natasha said…
Thanks for sharing the great excerpt and the chance to win!
natasha_donohoo_8 at hotmail dot com
11:36 PM