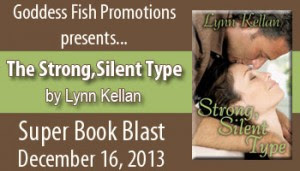 This post is part of a virtual book tour organized by Goddess Fish Promotions. Lynn will be awarding eBook copies of The Strong, Silent Type and Anything You Ask to a randomly drawn commenter during the tour. Click on the tour banner to see the other stops on the tour. Remember, the more you comment the better your chances.

If he breaks his silence about the scars marring his face, will the truth drive her away?

Tina Hudson's busy sales job is a welcome distraction from her empty house and memories of the husband she lost to cancer, but she's tired of running from her loneliness. Tina suspects her brawny neighbor has been leaving single red roses in her mailbox, but he's the strong, silent type-the kind that should come with a warning label.

Wade Scott felt dead inside over the loss of his son and the disintegration of his marriage. When Tina moves next door, Wade comes alive again. Problem is, she's a beautiful sales whiz and he's an ordinary plumber with a wicked scar along his temple. The truth of his past might drive her away. With little hope of attracting her attention, he showers her with anonymous acts of kindness.

When Tina realizes Wade is the guardian angel who's been watching over her for the past six months, she invites him to dinner. New Year's Eve is approaching, a perfect time to start over...but Wade's stoic silence drives a wedge in their burgeoning relationship. Should she take a new job that will put her on the run again, or take a chance the strong, silent type might fill her heart-and her home-with love?

For the past six months, Tina had no idea who was looking after her. Now she did, and a giddy surge of happiness made her body temperature inch up a degree. Hooking a loose tendril of hair behind her ear, she thought of the rose in her mailbox a few days ago. She didn’t dare ask if he’d put the flower there. She was too afraid he’d say no.

“Thank you, Wade. For everything.” She stepped forward and grabbed his coat sleeve. Beneath her grip, his arm tensed. Something about his stiffness released a billow of tenderness inside her, eclipsing her hesitance. Rising on tiptoe, she pressed a grateful kiss against his cheek. His whiskers prickled against her lips, markedly different from the soft baby’s skin she kissed a few moments ago. She liked the contrast.

Releasing him, she opened the door and watched him step onto the front porch. The freshening storm threw bits of sleet into her face, but she remained in the doorway to study the impressive breadth of his upper back.

Right before Wade stepped out of the light thrown off by the porch lamp, he turned. The wind whipped the hair out of his face, exposing the brutal scar slashing across his temple. Combined with the stark expression on his face, he looked incapable of affection. Tina knew better. This man had spent the past six months taking care of her house when she couldn’t, and he never sought the slightest acknowledgement in return.

Those selfless acts made her heart swell with warmth. “Goodnight, Wade.”

The dimple reappeared beside the corner of his mouth. “G’night, cupcake.” 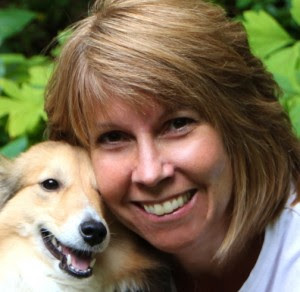 About the Author:Lynn Kellan has fallen in love with bad boys, burly athletes, and battle-hardened Marines. All of that research produced a startling revelation: men and women aren’t that different. We both want to be with someone who will empty the dishwasher.

When Lynn Kellan isn't writing stories about men and women who adore each other, she loves to play tennis and golf - but not at the same time. Her books contain a hearty dose of love and humor, which are necessary ingredients for a happily ever after.

Goddess Fish Promotions said…
Thanks for hosting!
7:09 AM

Lynn Kellan said…
I'm delighted to be featured on My World of Dreams today. Many thanks!
Warmly,
Lynn Kellan :)
7:21 AM

Andra Lyn said…
Hi Lynn! Thank you for showing us The Strong Silent Type and thank you so much for the giveaway!