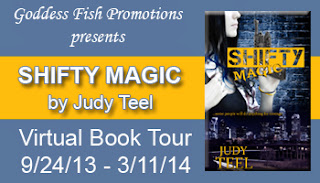 This post is part of a virtual book tour organized by Goddess Fish Promotions. Judy will be awarding a $25 Amazon GC to one randomly drawn commenter via the Rafflecopter below. Click on the tour banner to see the other stops on the tour.

Interview with Addison Kittner, license #43118 as issued by the state of North Carolina, 2032.

Hi Addison, thank you for agreeing to this interview.

As long as you’re buying lunch, I have nowhere else to be.

Um, yes. So, tell me, why did you become a bounty hunter and private investigator?

After High School, I didn’t have anything better to do so I thought, why not? I have a talent for finding things. I figured might as well put it to use by tracking down bad guys and getting rid of them. I mean, turning them in. I always follow the law. Make sure you write that down.

Tell me about your current case.

There’ve been some ritualistic murders around the city. Some decent people have died. My job is to make sure it doesn’t happen again.

I understand that you’re working for the FBI to solve these murders.

Agent Daine told you that, didn’t he? He’s delusional. I work alone. I don’t belong to anybody. Not the FBI, and not Daine. Get your story straight.

I had the privilege of interviewing Agent Daine recently. I found him fascinating.

I just bet you did. I’m surprised you were able to focus long enough to ask a single question. He has that affect on women.

Definitely not me. Just because his silver-green wolf eyes seem to look right into your soul and his—never mind. You going to eat the rest of those fries?

Help yourself. Tell me, what’s been your biggest disappointment on this case so far?

I see. Well, let’s move away from the murders and focus more on you. What was your childhood like?

Are you kidding me? I was ten years old when the paranormal factions attacked. The truth slapped us in our faces and everything went to hell--no electricity, no law enforcement or emergency personal, no way to get money. Chaos exploded into our lives. Monsters were suddenly real and they were stronger, faster, meaner and harder to kill than any human. They also liked to tear us apart and eat us.

I understand the foster family you were living with at the time fled the city and left you behind?

Yeah, that’s right. Food was scarce and they couldn’t hardly feed their own two kids. Why would they want to have another mouth to worry about?

Still, that must’ve been hard for you.

Not any harder than for every other orphaned and abandoned kid in the city. We managed. Anyway, by the time I was twelve it was all over. The good guy Weres came out of the closet and fought with us humans to put down the terrorists.

What about the vampires? I understand that many of them helped, as well.

There are no good guy vamps. Everything they do is for a purpose that serves their interests. Anyone who thinks differently is a moron.

One last question. Who is your one true love, and why?

Geez, you just won’t get off that one, will you? What are you a journalist for Weekly World News now? I don’t care about Cooper. How many times do I have to say it? The fact that he’s so beautiful it makes your mouth water and smells like a moonlit meadow means nothing to me.

He’s good at his job and you can count on him in a fight. That’s all that matters to me. And you better not print what I said before. He’d be impossible to live with if he knew any of that crap. Just stick with the facts of the case.

I understand. How about you tell us your favorite color?

What kind of an insipid question is that? What has my favorite color got to do with a brutal serial killer roaming the city?

Thanks for lunch and have a nice day.

...some people will do anything for revenge.

In a dystopian United States where paranormal races are out of the closet, a young PI struggles to stop a vengeful serial killer only to discover that the murderer holds the key to her secret magical heritage.

Book One in the YA13 paranormal/mystery series Dangerous Magic by Judy Teel. "Expect action, on-the-edge-of-your-seat suspense, and the perfect touch of romance." 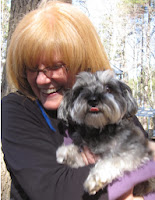 I live in North Carolina with my boisterous family–husband, three kids, a dog and a geriatric bunny–and yup, I’m Southern so occasionally I let a “y’all” slip out. Maybe more than occasionally.

I love my job and dedicate as much of my time to writing as I can. When I’m not doing the weaving of the adventurous and romantic tales, I’m running errands, driving people around (or crazy depending on your perspective), and generally pretending I’m a grownup.

When I was fifteen, I knew I wanted to be a novelist–wanted to write for Harlequin actually. But the calling to tell stories came a lot earlier than that, I just didn’t know what it meant.

I had a lot of growing up to do before I could manage it, though many would claim the growing up part didn’t take--you know who you are--but I finally have my dream job.

Life rocks—so should the books you read!