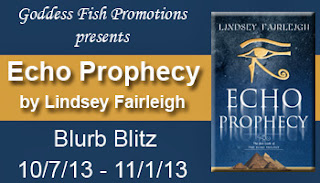 This post is part of a virtual book tour organized by Goddess Fish Promotions. Lindsey will be awarding a $15 Amazon Gift Card to a randomly drawn commenter during the tour--the Rafflecopter is at the end of the post. Click on the tour banner to see the other stops on the tour.

Alexandra Larson isn’t human…but she doesn’t know that. As far as Lex is concerned, she’s simply an ambitious and independent archaeology grad student with a knack for deciphering ancient languages, especially the various forms of Egyptian. When she’s recruited to work on her dream excavation, her translating skills uncover the secret entrance to an underground Egyptian temple concealed within Djeser-Djeseru—the famous mortuary temple of Queen Hatchepsut. Lex is beyond thrilled by her discovery…as is the enigmatic and alluring excavation director, Marcus Bahur.

As the relationship between Lex and Marcus heats up, a series of shocking revelations leave the young archaeologist reeling. Once Lex discovers the truth of her ancient Egyptian roots—the truth of her more-than-human nature—the people she trusts most make one final, terrifying revelation: Lex is the central figure of a four-thousand-year-old prophecy. She is the only thing standing between the power to alter the very fabric of time and an evil megalomaniac…who also happens to be her father. As events set in motion over four millennia ago lead Lex and Marcus from Seattle to the heart of Egypt, the fate of mankind depends on one thing: the strength of Lex’s love.

As a silent, shameful tear slid down my cheek, I asked, “Why didn’t you just tell me the truth on the plane? I imagined such awful things about you.”

He chuckled, but the sound held no amusement. “You thought the worst, and yet you were still willing to claim me as yours. You are unbelievable.”

I shifted my feet and frowned. “Claim you as mine?” I remembered thinking something similar, but I had no clue where the urge had come from. Who claims another person?

Shaking his head, Marcus said, “And you don’t even know what you did. I forget sometimes that you weren’t raised among us, that you don’t know our ways. But, it would seem that your instincts have a way of making up for your missing knowledge.” He hitched his head toward the direction of my confrontation with Sara. “What you just did—that was one of several types of claiming ceremonies. In the old ways, you just declared me yours.”

“Too late. It’s done.” He took a small step toward me, then another. “Do you know what comes next?”

Swallowing, I shook my head.

“Once the Nejeret, or Nejerette in this case, claims her intended, it’s up to the claimed to complete the ceremony by either rejecting or accepting the Nejerette,” he explained.

Looking at his boots, I asked, “How would the claimed reject the Nejerette?”

“By publicly vowing never to speak to her, touch her, or look upon her again. It’s the reason claiming is not very common.”

My eyes flew up to his, searching his face for any hint of his intentions. Will he reject me? After what I’d thought of him, I feared it was a distinct possibility.

“And how would the claimed accept the Nejerette?” I asked softly.

A slow, wolfish smile spread across Marcus’s face, and his golden eyes darkened with desire.

“Oh,” I breathed. My belly tightened, and my groin throbbed in rhythm with my suddenly speeding heartbeat.

“Would the Nejerette like her claimed to accept?” Marcus took another small step, leaving only a few feet between us.

Lindsey Fairleigh lives her life with one foot in a book--as long as that book transports her to a magical world or bends the rules of science. Her novels, from post-apocalyptic to time travel and historical fantasy, always offer up a hearty dose of unreality, along with plenty of adventure and romance. When she's not working on her next novel, Lindsey spends her time reading and trying out new recipes in the kitchen. She lives in the Napa Valley with her loving husband and confused cats.

Buy the book at Amazon, BN.com, Kobo, or Smashwords.

Goddess Fish Promotions said…
Thank you for hosting
10:16 AM

MomJane said…
Another great excerpt. I am going to love this book.
12:51 PM

lindseyfairleigh said…
Thank you so much for hosting Echo Prophecy (& me)! Gahhhh...that's one of my favorite excerpts, especially because of what happens next. :D
3:57 PM

Stormy Vixen said…
Thanks for sharing the great excerpt and the giveaway. Sounds like a great book. evamillien at gmail dot com
6:19 PM

Natasha said…
Sounds like a great read!!
Thanks for the chance to win!
natasha_donohoo_8 at hotmail dot com
10:19 PM