Spotlight on The King of Threadneedle Street by Moriah Densley 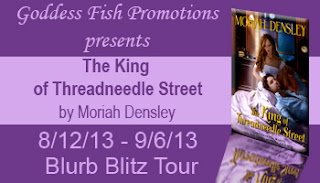 This post is part of a virtual book tour organized by Goddess Fish Promotions. Moriah will be awarding a genuine Victorian-style pearl jewelry set inspired by the book, including necklace, bracelet, and earrings to a randomly drawn commenter during the tour-- check out the Rafflecopter to enter. Click on the tour banner to see the other stops on the tour.

He owns three shipping companies, a diamond mine, and his own castle.
He knows Portuguese, Hindu, Mandarin and Morse code.
His assets net thirteen million.
Lord Preston wants the one thing money can’t buy…

Andrew Tilmore, Lord Preston, the financial prodigy dubbed “The King of Threadneedle Street” wants the one prize out of reach: his childhood sweetheart. The papers can waste a sea of ink scandalizing over his lavender-eyed Alysia; so what if she is the daughter of his father’s mistress?

Alysia Villier learned the craft of the courtesan from her infamous mother―by osmosis apparently. A gifted artist who almost won the Prix de Rome, Alysia is not interested in following in her mother’s footsteps, since Andrew ruined her for any other man. But with her legal guardian—Andrew’s father―in control of her inheritance, she has little choice in the matter.

Keeping Alysia out of trouble and away from eager suitors becomes a cross-continental quest for Andrew. Not his old-fashioned family, the disapproval of the ton, nor even Alysia’s dedication to duty and propriety will stop him. Playing newspapers and investors like pawns, tumbling world markets, inciting riots… has he gone too far?

Alysia Villier always knew she could never have Andrew Tilmore, her childhood sweetheart. A courtesan’s daughter is no match for a financial genius and peer of the realm. Alysia sees Romeo and Juliet’s story as a cautionary tale. Besides, who is truly in love as an adolescent? She expects to oversee the wedding preparations for Andrew’s sister, perhaps wave at Andrew from across the room, then never see him again.

A long shadow blocked the sun, accompanied by broad footsteps trampling the grass.

“What have we here, a unicorn caught sunbathing? Prime hunting,” came an almost familiar voice. A sonorous chocolatey bass, somehow deeper and throatier than when she had last heard it, and his Lancashire accent replaced by a genteel inflection she found jarring.

“Not at all,” she replied without opening her eyes, rattled by the jolt in her pulse. “Such plodding footsteps could only belong to a troll. Easily outrun by a unicorn. But trolls are really quite harmless, if you keep them fed.”

“No. Pomeranians.” An old joke stemming from their mutual love of mastiffs and disdain for yapping small dogs.

The sound of his laughter was perfectly familiar. She distrusted the easy, boyish, tone tempting her to believe all would be well now that he was here. She winked open one eye, unsurprised to find their years of separation had rendered him not at all like a troll. Over six feet of Gallic demi-god sharing the same body with the most bookish man she ever met. Andrew Tilmore, Lord Preston, heir to the illustrious Marquess of Courtenay. Drew, to her, or when he deserved it, Troll.

“Lisa,” he said in a tone he should reserve for a hot bath or rare cognac, and sat beside her on the grass. “As lazy as ever, I see.” Adolescent teasing which meant, So you managed to sneak away. Bravo.

“You were not expected until Friday next, Drew. Unfortunate timing you will no doubt regret.”

“Why? Is something amiss?”

Andrew snorted, waiting for her to explain. She would not. Lady Courtenay trying to run her household for the first time — while pretending to arrange a ducal wedding, which Alysia was truthfully in charge of — would not mix well with the problem Andrew’s presence would bring. Specifically, his being in the vicinity with Alysia.

She pushed herself up on her elbows, mindful of the buttons she had loosed on her bodice. He wasn’t looking, but fastening them would draw his attention. She sat up and wrapped her arms around her bent knees.

Andrew leaned in to catch her gaze, and she suppressed a shock. Of anxiety or lust-related, she couldn’t say, but in the seconds it took to trade glances, it became apparent that what his parents had tried to douse between them had not yet faded. He cradled her chin between his thumb and forefinger then stroked the edge of her jaw, which in times past heralded a kiss.

Two years ago, he would have mock-whispered, See, I am making eyes at you, Lisa. Wet your lips, I will lean closer, and as soon as you close your eyes, the violins will start. When you see firecrackers, say so. Then he would overly pucker his lips, smacking them together like a fish while she dodged, squealing. But sometimes his manner was quite serious, and those memories were best left buried in the back of her mind.

He was serious now. She knew that expression he wore, as plainly as though she heard his thoughts. Still it made her stomach drop and her lips tingle with longing. Alysia pulled away, not trusting herself to look him in the eye.

If she had any hope of surviving two weeks under the same roof with Andrew, she had best set the precedent now for their behavior, and this must be her last private conversation with him. Their last kiss had been more than two years before. After his sister’s wedding, she would never see him again. 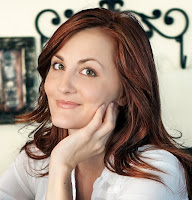 Moriah Densley sees nothing odd at all about keeping both a violin case and a range bag stuffed with pistols in the back seat of her car. They hold up the stack of books in the middle, of course. She enjoys writing about Victorians, assassins, and geeks. Her muses are summoned by the smell of chocolate, usually at odd hours of the night. By day her alter ego is your friendly neighborhood music teacher. She lives in Las Vegas with her husband and four children. Published in historical and paranormal romance, Moriah has a Master’s degree in music, is a 2012 RWA Golden Heart finalist, 2012 National Reader’s Choice Award “Best First Book” finalist, and 2012 National Reader’s Choice Award finalist in historical romance. She loves hearing from readers!

Buy the book at Astraea Press, Amazon, BN.com, or Smashwords

Mary Preston said…
I love scenes & meetings where characters have been apart for a time & then reunite. Very telling.

Anonymous said…
The blurb caught my interest with his knowledge of so many unusual languages together. Sounds like a very unusual hero.