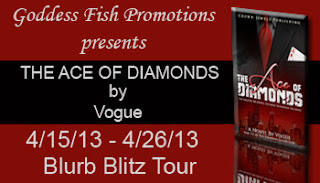 This post is part of a virtual book tour organized by Goddess Fish Promotions. Vogue will be awarding $50 Gift Card to Kay Jewelers to a randomly drawn commenter during the tour. Click on the banner to see the other stops on the tour.

Since his release from prison, Brookstone’s most notorious drug lord, Jay Santiago, has been hard at work rebuilding his life and empire. With two businesses under his belt and one in the making, Jay is readily known as one of New York’s elite men.

While the root of his financial status lies in the newly rebuilt Santiago cartel, Jay is determined to expand his wealth. After reconnecting with an old comrade, he believes that he has found the one thing that could increase his fortune and allow him to leave behind the dangers of his criminal enterprise for good.

However, as Jay’s new business venture begins to come to fruition, he quickly learns that the one material object that he loves the most could lead to his biggest downfall yet.


Jay focused the conversation on the real reason that he had come to Dallas. He had recently linked up with one of his old comrades who had helped him put millions into a new investment, one that he wanted Lotus to help him with. His plan was to use their connection to his advantage.

“I figured that since I’m Hector’s son that you would help me.”

Lotus was taken aback. “Help you? Help you with what?”

Jay knew that what he said next was going to send Lotus into a fury. “I need a warehouse,” he told him, quickly.

“Oh no,” Lotus said, taking off his seatbelt. “Stop the car, Arnold. Pull over.”

Jay unbuckled his seatbelt as well. He grabbed Lotus’ shoulder, in an attempt to calm him down. “Lotus, come on, listen to me. I know you helped me with this before, but I need another one. I mean, you sold me the building for Blue Magic. I’m making honest of the restaurant, aren’t I? I promise you, I will—” Jay was interrupted as Lotus screamed in his ear.

“Are you out of your mind? What are you getting into now?”

“I can’t go to anybody with this project. I don’t need a lot of ears or eyes on this. I trust you, Lotus. I know that you won’t publicize this sale like you do the others. I know you will take the warehouse out of your company’s listings way before the sale is even complete.”

Lotus shook his head, nervously. He knew that if Jay was asking for a warehouse then there was probably some illegal operation about to go down inside of it. The last time he had sold him one, he ended up using the space to house illegal drugs and weapons. Now, he wanted one again. Certain that Jay was still running a drug cartel, Lotus didn’t want anything to do with it. His days of working alongside a criminal enterprise were long gone.

ABOUT THE AUTHOR:   Born and raised in Greenville, South Carolina, Vogue’s journey through the world of creative writing first began in middle school with poetry and songwriting. While the mix of rhythm and words was the initial passage to self-expression, it was the discovery of prose that opened the door to a world of endless possibilities. An avid reader of Urban Fiction, Vogue felt the need to create literary works that had an equal balance of street lit, drama, romance, and faith-based undertones.

By 2010, Vogue had written drafts of the entire ten book series and in June of 2010, Diamonds In The Rough, was published for her to share with the rest of the world. Soon followed by Diamonds Are Forever in October of 2010 and The Ace of Diamonds in February of 2013, Vogue joined the league of other writers, determined to make her mark in the literary world.

Still writing, Vogue plans to release the fourth book in the series, Black Diamonds, in late 2013 or early 2014 as well as pen her first Young Adult novel.

Goddess Fish Promotions said…
Thank you for hosting
6:08 AM

Anonymous said…
Thank you so much for hosting today! I am having an amazing time with this blurb blitz tour!

I will be checking back in with the tour later this evening, but in the meantime, I have a question for all of you readers and authors: What is your favorite genre and why?

I'll go first and say my favorite genre is Urban Fiction because of the non-stop action and intense storylines.

Share your favorite genre and why to enter into a drawing to win a $50 gift card to Kay Jewelers.

I've gotta say that I'm caught between Fantasy and Historical Fiction for my favorite genre...of course, both of those fall flat unless there is a romance mixed into the story along with a dose of mystery so I guess you could say I like blended genres best? lol How about you???

Lakia Barr said…
Hi! I want to first say this is a great idea! But to answer the question, I have to say Christian fiction is my favorite genre. There is faith, love, sex, violence and drama! I love that no matter how much is going within the story, there is a lesson rooted in spirituality. Of course this is only true if the book is well written.
9:20 PM

Anonymous said…
I must say that I haven't read a lot of Fantasy or Historical Fiction unless Twilight goes under the fantasy category, lol.

I do like books that have romance and mystery.

I was a late bloomer with Christian Fiction. Since discovering the genre, I realized that the stories were just like the other novels I was reading, but had a spiritual undertone. I have since collected more Christian Fiction novels, however, I have not read them all.
10:27 PM

Unknown said…
Great post....my fave genre use to be memoirs and has now turned to modern romance. The last few books I've read have been old Nicholas Sparks books.