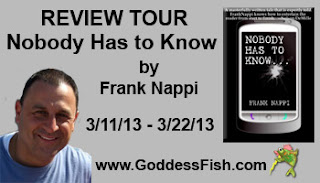 This post is part of a virtual book tour organized by Goddess Fish Promotions. Frank will be awarding a $50 Amazon gift card to a randomly drawn commenter during the tour. Click on the tour banner to see the other stops on the tour.

I suppose my writing space is not that unlike those of other authors. Well...maybe that’s not entirely true. I do most of my writing in my office at home, a modest room with burnt orange walls adorned with my most treasured baseball memorabilia, highlighted by a beautiful 16X20 black and white Cooperstown signed photo of Ted Williams which hangs right over my desk. I have other unique items in the room as well, including game used spikes signed by Tony Gwynn, an autographed Sports Illustrated cover celebrating Hank Aaron’s 715th home run and two Shea Stadium seats that I acquired after the Mets shut down the old place. There’s lots more as well - other baseball items from seasons past that are imbued with memories that always make me smile.

The true story of Frank Nappi the author, however, probably lies in a careful analysis of my actual work area. My desk is essential to my existence as a writer, as it houses my Mac, keyboard and printer. This oversized walnut flat top is also littered with a cornucopia of items, some of which you would expect any author to possess - practical articles germane to the writing process, like pens and pencils, a clock, an old fashioned dictionary, and other office supply “stuff” like paper clips, tape, staples, etc. Although in this technological age most of the actual work that goes into writing a novel occurs on computer, there are times when those traditional items come in handy.

Those items, however, share the space with others that hover, I suspect, in the realm of the idiosyncratic. These more colorful articles cluttering my desktop, the ones which really provide a glimpse into the world that is my writing space, include a tiny wooden Hemingway House replica I bought while in Key West, a 12 inch Batman figure, a New York Met Bobblehead, San Diego Sno Globe, lots of loose family photos and a F.Scott Fitzgerald magnetic finger puppet I received as a gift. An I-Pod loaded with every song every produced by the likes of Kenny Chesney, Zac Brown Band, Jason Aldean and a few others is also just a hand’s reach away, when the moment calls for a little diversion or inspiration as it were.

It is quite an odd amalgamation of “things” but it’s my space and it works for me!

About the Author:Frank Nappi has taught high school English and Creative Writing for over twenty years. His debut novel, Echoes From The Infantry, received national attention, including MWSA's silver medal for outstanding fiction. His follow-up novel, The Legend of Mickey Tussler, garnered rave reviews as well, including a movie adaptation of the touching story "A Mile in His Shoes" starring Dean Cain and Luke Schroder. Frank continues to produce quality work, including Sophomore Campaign, the intriguing sequel to the much heralded original story and the just released thriller, NOBODY HAS TO KNOW, which received an endorsement from #1 New York Times bestselling author Nelson DeMille. Frank is presently at work on a third installment of his Mickey Tussler series and his next thriller. He lives on Long Island with his wife Julia and their two sons, Nicholas and Anthony.

Nobody Has To Know, Frank Nappi's dark and daring new thriller, tells the story of Cameron Baldridge, a popular high school teacher whose relationship with one of his students leads him down an unfortunate and self-destructive path. Stalked through text-messages, Baldridge fights for his life against a terrifying extortion plot and the forces that threaten to expose him. NHTK is a sobering look into a world of secrets, lies, and shocking revelations, and will leave the reader wondering many things, including whether or not you can ever really know the person you love.

Mary Preston said…
It's the 'things' that can be very revealing.

Goddess Fish Promotions said…
Thank you for hosting today.
6:01 AM

MomJane said…
I loved your description of your desk. It sounds comfortable and relaxing. A perfect place to write, especially while listening to soft country music.
7:11 AM

Andra Lyn said…
A country fan huh?? Definitely the kind of songs I'd want to write to :) Thanks for sharing the guest post!

Andra Lyn said…
A country fan huh?? Definitely the kind of songs I'd want to write to :) Thanks for sharing the guest post!

Anas said…
Your place looks pretty neat, mine is usualy pretty chaotic when I write a paper :)

Ami said…
Sounds like the perfect writing corner, not too many distractions.

Emiliana25 said…
Is there a book or an author that inspire your writing?

Catherine Lee said…
I spent quite a few hours with my butt in those seats at the old Shea Stadium. The family went to a lot of games in the late 60s/early 70s.
catherinelee100 at gmail dot com
9:38 PM

Anonymous said…
Wow a replica Hemingway's house! Now that's a great form of inspiration right there. I love how all these oddities combine to form a sanctuary for you. Amazing.